2020 XTERRA World Tour Gets Underway in Wellington this Saturday 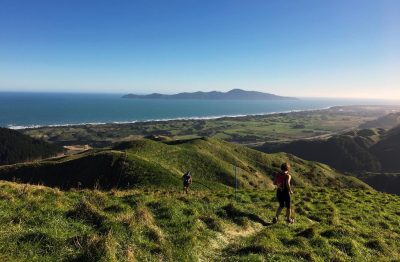 The inaugural XTERRA Wellington Festival this Saturday, February 1, is a massive celebration of the healthy, active, outdoors lifestyle offering events for adventurers of every skill level with options including the Super 6km Trail Run (14 and 21K options too!), a 31K mountain bike race, off-road duathlon, plus sprint and full distance off-road triathlon events.

Honolulu, HI – It may be cold where you are, but summer is in full swing in New Zealand where more than 700 off-roaders are gathered to ring in the 2020 XTERRA World Tour season-opener at Queen Elizabeth Park on the Kapiti Coast.

The inaugural XTERRA Wellington Festival this Saturday, February 1, is a massive celebration of the healthy, active, outdoors lifestyle offering events for adventurers of every skill level with options including the Super 6km Trail Run (14 and 21K options too!), a 31K mountain bike race, off-road duathlon, plus sprint and full distance off-road triathlon events.

“The majority of our field will be made up of people wanting to take on the challenge and enjoy XTERRA for what it is — a family and lifestyle,” said event director Bengy Barsanti, whose entire family is involved in the event production and hospitality of the event, from giving rides to sharing homestays and home cooked meals.

Of course, while the masses will take part purely for the enjoyment, some of the fastest off-road triathletes in the world are in Wellington as well, and are looking to get 2020 off on the right foot.  Chief among them are a pair of Kiwi XTERRA greats, Sam Osborne and Lizzie Orchard, both of whom finished in the top five at XTERRA Worlds each of the last two years.

“It’s early days in a long season that finishes in November so for sure I’m not at peak fitness, but still excited to get on the start line,” said Osborne, the two-time XTERRA Asia-Pacific Tour Champ and reigning XTERRA Pan American Tour Champion.

Osborne, who won more XTERRA World Tour races than anyone last year (6), didn’t take much of a break after Maui.  Instead, he jumped straight into The Pioneer, an epic six-day mountain biking stage race covering 500km of riding with 10,000m of climbing.

“Yeah, off-season was a little more exciting than usual with Ryan Sissons and I teaming up to race in the Pioneer. It was something we have both wanted to do for a long time and this year it all kind of fell into place that we could. For sure a bucket list race for us, and I think we did ourselves justice against some big hitters in the mtb stage racing world.”

Sissons, who finished second to Osborne at XTERRA New Zealand last year, is a two-time Olympian in build mode looking to qualify for the Tokyo Olympics this summer and is certain to give Osborne a proper run on Saturday.

“I’m sure it will be pretty hectic from the start with someone like Sissons on the line,” said Osborne. “The ITU boys are very well balanced & I can confirm he does ride a mountain bike very well. Kyle Smith is also coming, off the back of two 70.3 wins, so is clearly in good knock so I imagine it will be a very fast & furious sort of race.”

In addition to Osborne, Sissons, and Smith, 2018 XTERRA Pan Am Tour Champion Kieran McPherson is also in the mix and knows how to win.  He captured the XTERRA Japan title last year, and won XTERRA Argentina, Brazil, and Victoria the year before.

The women’s elite race looks equally as exciting with Orchard, the home country favorite, facing off against her Aloha Racing teammate Kate Bramley from Australia.

“I had a break after Worlds and now going into 2020 pretty fresh and ready for the year ahead,” said Orchard.  “This will be the first time I’ve raced in the first half of the year in four years, so I’m actually really excited to be on the start line. Being so very early season I’m not putting any pressure on myself, and feeling fortunate to have this new World Tour event so close to home.  I haven’t been to the Kapiti Coast before, so I’m keen to see what the trails are like and enjoy a real NZ ocean swim.”

For Bramley, who won in her elite debut last year at XTERRA Netherlands, the summer has been spent building speed and fine tuning her mountain biking skills.

“I feel well prepared having got some good training in over the summer,” said Bramley.  “I’d love to start with a win here in Wellington and will be fighting until the end to get the best possible result but with XTERRA anything can happen on the day. My game plan is to be consistent all race, focus on smooth riding and leave nothing in the tank.”

Those two will be joined by Leela Hancox, who finished fifth in the XTERRA Asia-Pacific Tour standings last year, plus Maeve Kennedy and Solenne Billouin from France, who won the ETU Cross Triathlon European Championship amateur title last year before going pro.

“It will be my first elite race and only my second XTERRA ever,” said Billouin.  “I really want to give my best and see if I’m able to race at this level, especially after breaking my collarbone six months ago.”

XTERRA Wellington is a Silver-level event and the first of six races on the 2020 XTERRA Asia-Pacific Tour.  To determine tour champions, elites count their best three scores and the XTERRA Asia-Pacific Championship race (March 28 in Kenting, Taiwan) must count as one of those three scores regardless if they race in Kenting or not.  In addition, elites count just their highest score from the two races in New Zealand (the other event, XTERRA Rotorua, is set for April 4).  The Tour also ventures to Moorea, Tahiti on May 30, Kunming, China on August 30, and Marunuma, Japan on September 20.

Find more information and complete rules for both amateurs and elites here.

XTERRA® is a global lifestyle brand and off-road triathlon race series. What started in 1996 as the world’s first off-road triathlon in Maui, Hawaii, is now an endurance sports lifestyle with a racing presence in over 30 countries worldwide and expanding. XTERRA® cultivates a passionate and dedicated community, celebrated by intrepid triathletes, trail runners and outdoor adventurists around the globe.  Learn more at www.xterraplanet.com.