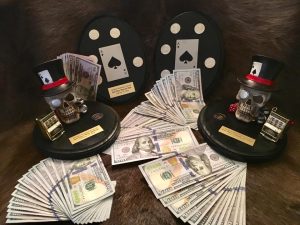 Las Vegas, NV – The 7th Annual Jackpot Ultra Running Festival, Sin City’s premier endurance running event, returns to Cornerstone Park in Southern Nevada February 14-16, 2020. Jackpot will again feature the USA Track & Field 100-Mile Road National Championship race, along with 6/12/24/48-hour races, a standard 100-mile race and a 50-mile race. The sold-out field of nearly 350 runners will run on a short loop course around a majestic 31-acre bird sanctuary lake on a USATF certified and sanctioned course. All races start at 8:00 AM PST on Saturday, Feb 15, except for the 48-hour race and USATF 100-Mile race, which both begin Friday, Feb 14 at 8:00 AM PST.

The Fabulous Las Vegas Showgirls, along with Elvis and Lucille Ball’s famous pink Cadillac, will be on-hand both Friday and Saturday to kick-off all races, while local musician Jonny Hazard will perform lakeside on both Friday & Saturday.  For the third straight year, the race offers a prize pool up to $10,000. The public is welcome to watch the full competition and attendance is free.

Ken Rubeli, Jackpot Race Director and co-owner of Beyond Limits Running stated, “We are honored to again bring the USATF100-Mile Road National Championship to Henderson, NV. Jackpot is uniquely different than most ultra-events as it offers world-class competition where newbie ultra-runners compete side-by-side with the world’s best ultra-runners.”

About Beyond Limits Running:

Co-founded 8 years ago by a double organ transplant recipient and her husband, Beyond Limits Running was formed to help all runners, especially average runners, run way past their perceived limits by competing in ultra distance running events. Known for its over-the-top festive events, Beyond Limits Running produces the Jackpot Ultra Running Festival and the Beyond Limits Ultra race.  Learn more at www.BeyondLimitsRunning.com.

View all Releases by
Beyond Limits Running