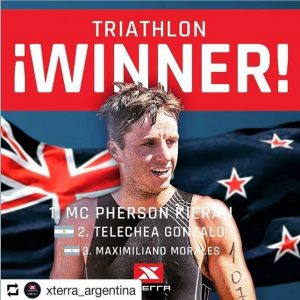 Upstart XTERRA racer will do a triathlon a day across NZ for training and charity: plans to race in various endurance sports after moratorium ends

San Pedro, California (June 17, 2020) —What does a world-class multi-sport athlete do when racing is cancelled across the globe and his borders are shut? To keep in top shape in case racing reopens, New Zealand professional XTERRA athlete Kieran McPherson creates his own ‘racing’ adventures: His backyard iron-distance tri in May (TKTK) will be followed up with ‘Tri Across NZ’ where he’ll do one triathlon per day to cover the over 2000-km length of both NZ islands — equal to 10 iron distance triathlons.

He’s attempting the feat for two main reasons: First he hopes to build his fitness for racing season which may open later this summer. He also hopes to raise money for Philips Search & Rescue Trust (PSRT), an organization with which he has first-hand knowledge.

“While this adventure won’t take quite as much hard labor as the backyard iron-distance effort — I had to dig out a 25-meter pool for the swim leg and built trails on my property for the run — it will require extensive planning along with extraordinary commitment, he says. “Oh, and the physical and mental endurance aspect may be a factor as well, especially since I don’t have my usual training and racing miles in the bag.

“Of course the added inspiration of helping PSRT, after they helped save my life almost a decade ago, will hopefully keep me motivated when things get tough. And they will get tough as we’ll be heading through the Southern Alps, through rivers and lakes, etc, in the dead of winter!”

So just how will this work? Starting in Bluff, one of the southernmost points, Kieran will set out to finish hopefully 10 days later in Cape Reinga at the top of the North Island. Each day will include a swim, ride and run of various distances and settings, including pools, rivers and lakes along with paved road, gravel and trails,.His goal is to include multiple iron-distance (or Long Course) days consisting of a: 2.4 mile swim; 113-mile ride, 26.2-mile run.The day-to-day schedule, including the start, will be flexible due to possible weather restrictions and other impediments.

If not for the PSRT, McPherson may never have reached his current level of fitness and athletic success: In April 2012, he suffered a fractured L3 vertebra in a tree felling accident, and due to the location, he had to be air-lifted to the hospital. Their swift response allowed McPherson to fully recover and pursue his passion, soon enough to win his first age-group World Championship later that year. He hopes his efforts will raise money and awareness for this critical operation.

For more on McPherson and his Tri Across NZ project, please contact his North American management team, SIMBOL Communications.

To see more about this project and to make a donation, please click HERE.

Kieran McPherson is a professional multi-sport athlete who has mostly specialized in XTERRA racing. Despite starting at a relatively young age, he quickly gained prominence on the international racing stage, with consistent wins and podiums. Going forward he aims to branch out to a wider range of sports including trail running, road triathlons, obstacle course racing and more. This ‘small-town boy’ enjoyed a family-oriented upbringing which led to his now-renowned work ethic and perseverance; and in true ‘underdog story’ fashion, he’s now looking to make himself a name on a more global scale.

SIMBOL Communications formed to help brands tell truthful, authentic stories through exposure in a wide variety of media outlets, developing creative in the outdoor, cycling and fitness industries — as both industry professionals and competitive enthusiasts — the founders of SIMBOL have all the tools to get powerful stories to the right audience.

View all Releases by
SIMBOL Communications