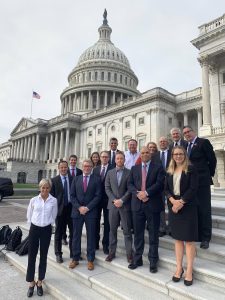 WASHINGTON, D.C. – On Wednesday, Oct. 30, PeopleForBikes hosted bicycle industry leaders from across the nation in Washington, D.C. to advance the industry’s priorities at the federal level.

Eleven executives met with their Congressional representatives about the need for significant funding increases to key bicycling programs in the 2020 transportation reauthorization bill, and reinforced the industry’s call for tariff relief amidst the ongoing trade dispute with China. The industry’s top infrastructure priorities were endorsed by more than 70 companies, large and small, in a letter shared with lawmakers earlier this week.

“Using our voice to secure better bicycling infrastructure should be a priority for all bike business owners,” said Pacific Cycle President Nando Zucchi, who joined the fly-in from Madison, Wisc. “Federal funds flow down to state and local programs to build everything from protected bike lanes for your commute to the parks where your kids learn to bike, and many trails and pathways in between. When our customers have fun and find safe places to ride, our industry thrives alongside them.”

Federal policy for all surface transportation programs is set to expire in less than a year. This fly-in comes as key committees are negotiating the new bill. Weighing in now is crucial to ensuring that funding for bikes is included and prioritized as a part of a 21st-century transportation network. Bike industry leaders help members of Congress to understand the role bikes play in their communities and how the federal government can best serve multimodal needs.

“Our executive fly-ins give the bike industry a meaningful opportunity to engage with their elected officials on programs that get more people riding bikes more often,” said PeopleForBikes Director of State and Local Policy Morgan Lommele. “At every level of government, this engagement is critical. Business owners become policy leaders, and show lawmakers the connection between ridership, business and infrastructure. Securing more dedicated funding for bike projects in next year’s transportation reauthorization bill is critical and our industry leaders are really stepping up on behalf of the millions of Americans who ride bikes and those who would but don’t because of a lack of safe, connected, comfortable bike infrastructure.”

Claudia Wasko, vice president and general manager of Bosch eBike Systems Americas, participated in her second fly-in. “The bike industry needs to educate our elected officials about the power and utility of e-bikes,” Wasko said. “As this fastest growing sector of the market continues to expand, Congress must modernize our transportation networks for those choosing e-bikes and other alternative modes.”

PeopleForBikes and its partner businesses will continue to aggressively work with allies on Capitol Hill pursuing policies that are beneficial to bicycling and the bike industry. Please contact Jordan Trout (jordan@peopleforbikes.org) if you’re interested in joining one of these events.

PeopleForBikes is making better biking for everyone by uniting millions of individuals, thousands of businesses and hundreds of communities. Because when people ride bikes, great things happen. Join us at PeopleForBikes.org.

View all Releases by
PeopleForBikes