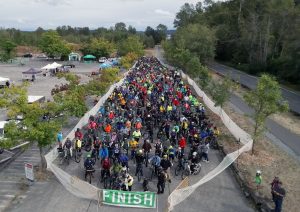 SEATTLE – October 10, 2019 — It’s official! Rad Power® Bikes, Cascade Bicycle Club and hundreds of Seattle ebike riders now hold the GUINNESS WORLD RECORDS™ title for most ebikes on a single ride. The 405-person group ride, which took place in September 2018, was just confirmed to have surpassed the previous record of 271 ebikes.

“This event was an incredible display of our community’s passion and enthusiasm for ebikes, which has continued to grow since the group ride. It’s not every day that you get to set a world record, so we’re really proud of this achievement and the work that everyone put in to the process,” said Ty Collins, Co-Founder and CMO of Rad Power Bikes, North America’s largest ebike brand.

The two-mile group ride through Seattle’s Magnuson Park not only celebrated the region’s diverse bicycling community, but also showcased the growing popularity of ebikes locally and across the United States. In fact, a total of 22 states now utilize the popular three-class ebike system, doubling the number of states that had established ebike laws at the start of 2019. The U.S. Department of the Interior also recently updated its policies to classify all ebikes as non-motorized vehicles, which means ebike riders can now access any trails or paths where traditional bicycles are allowed. The legislation increases access for millions of people to ride ebikes, particularly those who face health or mobility challenges.

“Ebikes can be a great tool to help people improve their lives through bicycling, which is a core part of our mission,” said Richard Smith, Executive Director of Cascade Bicycle Club, the nation’s largest statewide bicycle organization. “Beyond the record setting numbers, it was exciting to see so many people of all ages and ability levels participating in the group ride, and I think that shows how empowering ebikes can be.”

In order to verify their claim to the record, Rad Power Bikes and Cascade submitted dozens of photos, videos, registration forms, witness statements and more as part of a thorough application and review process. After receiving official confirmation of their record-setting achievement, representatives from Cascade Bicycle Club presented the Rad Power Bikes team with the certificate at the ebike brand’s Seattle Showroom.

Rad Power® Bikes is the largest ebike brand in North America. Founded in 2007, the global consumer direct company boasts a full lineup of affordable ebikes and accessories that are changing the way people and goods move. The company designs all of its products in-house at its Seattle headquarters and operates international offices in Vancouver, British Columbia, and Utrecht, the Netherlands. The team of passionate ebike enthusiasts, product designers, and entrepreneurs create ebikes that are built for everything and priced for everyone.

Cascade Bicycle Club, the nation’s largest statewide bicycle organization, is powered by over 10,000 members and 29 staff and serves bike riders of all ages and abilities throughout the Puget Sound region and across Washington state. With a mission to improve lives through bicycling, the 49-year-old nonprofit delivers community and school-based education programs, advocacy for safer streets, free group rides, world-class events such as Seattle to Portland (STP), and more. Learn more at cascade.org.

Everything You Need to Know about the New GMC Hummer EV