The Conservation Alliance Applauds the U.S. House of Representatives for Passing the CORE Act 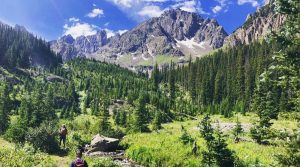 The CORE Act will designate new wilderness and special management areas in the Continental Divide area, protecting backcountry opportunities in the Spraddle Creek Wilderness addition outside of Vail, and exquisite backcountry ski terrain and mountain biking around the Tenmile Mountain outside of Frisco. The bill will also create Camp Hale as the nation’s first National Historic Landscape, preserving the history, wildlife, clean water, and booming outdoor recreation economy in the area. In the San Juan and Uncompahgre National Forests of southwestern Colorado, the CORE Act will protect backcountry skiing near Lizard Head Pass outside of Telluride with the creation of Sheep Mountain Special Management Area, and will expand existing mountain biking near the town of Ophir. Wilderness additions in the famous Mt. Sneffels 14er will protect work class climbing and hiking while preserving access to the Liberty Bell/Hardrock 100 trail. The bill would prohibit future oil, gas, and mining development on 200,000 acres of rugged, wild lands along the Thompson Divide in the White River National Forest, and protect historic ranching and agriculture, and varied outdoor recreation such as the famous Thompson Creek Fins sport climbing area. The legislation will also add protections to the Curecanti National Recreation Area.

The CORE Act is an investment in Colorado’s outdoor recreation economy. Protected public lands in Colorado serve as the foundation of the state’s $62 billion outdoor-recreation based economy, which sustains 500,000 jobs in Colorado.

“The CORE Act demonstrates that protected public lands are our common ground. We applaud Senator Bennet and Congressman Neguse for championing this important legislation, and hope today’s passage in the House of Representatives paves the way for success in the Senate,” said Kirsten Blackburn, Advocacy Manager, The Conservation Alliance.

The legislation now awaits action in the U.S. Senate. The Conservation Alliance is leading a small group of outdoor and craft brewery business leaders to Washington D.C. next week to encourage the Colorado delegation to make the CORE Act law this Congress.