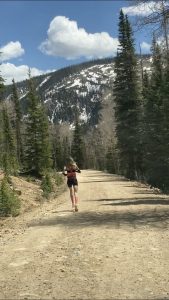 Camille Herron is an Ultramarathon runner originally from Oklahoma. She is the first athlete to win all three of the IAU’s 50k, 100k, and 24-Hour World Championships. She won the 2017 Comrades Marathon and has set multiple best times on multiple distances throughout her career. Camille is a three-time Olympic Marathon Trials Qualifier and is a Guinness World Record holder for the fastest marathon in a superhero costume running 2:48:51 dressed as Spiderwoman.

UltrAspire CEO, Bryce Thatcher, works very closely with the athlete team to drive products forward out of necessity. The team at UltrAspire is incredibly excited to work, learn, and associate with Camille. “Innovation comes from need, and it comes from the need to push our limits” Bryce says. “Being able to work with and represent athletes that have such an incredible level of skill is an honor” he says.

UltrAspire strives to partner with athletes who have aligning missions and beliefs as the brand. “Camille is an exceptional athlete with a down to earth personality who wants to constantly improve herself. I am so beyond excited that she is here and look forward to working with her” Athlete Manager Jodi Hicks says.

View all Releases by
ultraspire