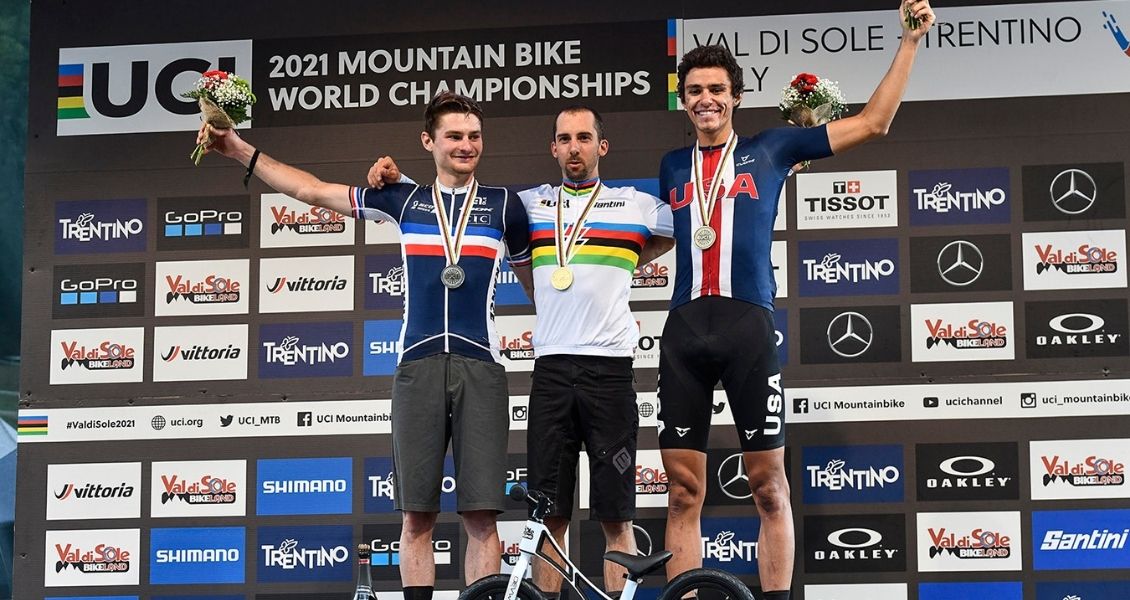 Christopher Blevins rode to a hard-fought bronze medal in the Men’s E-MTB race.

VAL DI SOLE – TRENTINO, Italy – On day three of the 2021 UCI Mountain Bike World Championships, the downhillers got timed runs in for Qualifying with the E-MTB race taking place in the afternoon.

Christopher Blevins (Durango, Colo.; Trinity Racing) goes three-for-three. After his World Championship win in the Short Track yesterday, he was asked if he would still race in the E-bike race and said, “Yeah, just for fun.” No one was surprised to see him fighting for another medal. After a fourth-row call-up, Blevins had some work to do.  After the first lap, he was sitting in eighth and consistently picked riders off each lap. He had the second-fastest lap time in the second lap and moved into fifth. At that point, he was right behind seasoned E-MTB racer Charlie Mullins (Grove City, Pa.). 2019 Masters Mountain Bike World Champion Mullins finished fourth in this event in 2019, sixth in 2020, and was riding in a solid fourth for most of today’s race. Blevins and Mullins rode several laps together until Blevins made his move, bridged the gap to third, and was suddenly in the fight for the bronze medal with Joris Ryf of Switzerland. Blevins started to ride away with one lap to go and finished with a four-second gap over Ryf to grab his third medal of the 2021 World Championships. Mullins went on to finish sixth.

This marks three medals for Blevins in the first three days of Mountain Bike Worlds with still more events to come. Blevins said, “A couple weeks ago, I decided it would be fun to turn this into a five-day stage race. I haven’t spent much time on the e-bike but I definitely will now. That was so much fun. It was definitely motivating when I was battling for third and to try to get away with another medal. It’s just been an incredible week and a lot of fun, especially with how different each race has been.”

Retired professional cross-country racer Callie Horwath (Brevard, N.C.) raced in her first E-MTB World Championship today. This is her first-year racing e-bikes, but she has dedicated her entire season to this new kind of racing. Horwath finished a couple laps down for the leaders who were blazing through the course. Ashley Hendershot (Mansfield, Ohio) also competed finishing in the Top-20.

The downhill track at Val di Sole is dry, extremely rough, and very steep in sections. The riders have no time to recover at any point during their timed runs, especially on race day. Today was qualifying for the downhillers, which works differently at World Championships than for the World Cups. Typically the qualifying times rank the riders’ starting order for the finals, but at  World Championships, qualifying times have no bearing on start order. In the Elite Men’s race, the Top 80 moved on to finals, with the rest of the categories having fewer riders than spots available; therefore, everyone moves on to Sunday’s race.

The majority of the Team USA Juniors are racing their first World Championships, but it didn’t show. Dylan Maples (Orangevale, Calif.; Commencal) rode to 17th with a time of 3:54.389. Andrew Driscoll (Bow, N.H.; Defiant Racing) and Dean Lindsey (Pleasanton, Calif.) also finished back-to-back in 27th and 28th. USA’s top-ranked junior and Downhill National Champion, Christopher Grice (Brevard, N.C.; Specialized Factory Racing), could not start after suffering from a crash on his first practice lap. He will undergo surgery on his broken arm today.

Junior Women’s National Champion Ella Erickson (Hayden, Idaho; Commencal USA) had a clean run sliding into 10th for qualifying. Erickson is looking to best her fifth-place performance at Worlds last year. 17-year-old Emma Artz (Kirkland, Wash.) finished just behind in 12th. Team USA had a solid day, with the team staying upright and not having mechanicals. They’ll be ready to throw down on Sunday.

Tomorrow is all about the Cross-Country racers starting with the U23’s then on to the Elites in the evening.

Visit USACycling.org for more information on the athletes, events, and membership programs, and follow @USACycling across all channels for the latest on Team USA.