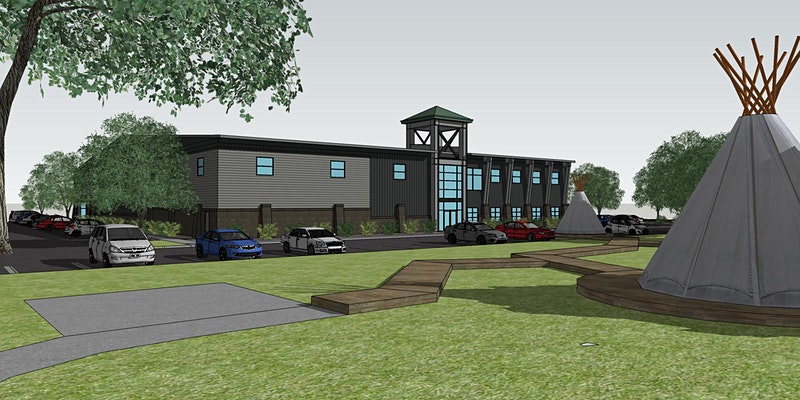 Built on 2.5 acres, the new Colorado Yurt campus will double the size of its existing facility. The new campus will include outdoor displays of products along the river trail allowing customers to “try before they buy” while taking a factory tour.

“We are excited to complete our new campus within the Colorado Outdoors,” said John Gibson, CEO of Colorado Yurt.  “We look forward to being part of the Montrose collection of Outdoor Industry companies collaborating on our future success.”

A mixed-use development, the Colorado Outdoor Project (COP) includes new and expanding businesses, recreational amenities, new homes, and new apartments. According to Anderson Analytics, the 160-acre project is anticipated to have over a $200 million impact on the local and regional economy.

With the recently completed recreation trail and a conservation-minded river restoration project, the area aims to be an economic catalyst to the region.

“The new Colorado Yurt campus is going to be a wonderful addition to the community,” said David Dragoo, the president of Colorado Outdoors. “Our small businesses drive our economy, and the fact that Colorado Yurt chose to expand in Montrose is awesome.”

The Colorado Yurt campus is within the boundaries of the Montrose Urban Renewal Authority, or MURA. This public-private partnership established in 2016, requires local support of all property taxing authorities who pledge a portion of future property tax increment to fund site improvements and construction.

“The Montrose model for collaboration between private and public entities is highly respected across Colorado,” said Barbara Bynum of the Montrose City Council. “The city’s partnership in the project will help achieve many of the city’s goals such as expanded housing options, additional quality jobs, and recreational amenities that drive innovation,” added Bynum.

With a focus on attracting new businesses in the outdoor products industry, the COP is already home to outdoor industry brands like fly fishing companies Abel, Ross Reels and Airflo, and will include others such as Wedge Brands, owners of Level Gloves, Elevenate Apparel, and Xcel Wetsuits.

The new Yurt campus is expected to be completed by the Fall of 2022. The architecture work was completed by Grey Wolf Architecture out of Denver, Colorado, and the general contractor is Alcorn Construction out of Lakewood, Colorado.

“I am honored that John and Kelly selected Alcorn Construction to be their design-build partner”, said Chris Alcorn, president of Alcorn Construction. “Colorado Yurt is bursting at the seams in their current facility and we can’t wait to get their new building finished so we can watch what they will do there!”

For information on the project can be found at coloradooutdoors.co

About Colorado Yurt Company: Founded in 1976, Colorado Yurt Company handcrafts yurts, tipis and rugged canvas wall tents. The original tiny workshop is now a campus of production facilities and display dwellings located at the base of the Rocky Mountains in Montrose, Colorado. Learn more at coloradoyurt.com.

About Colorado Outdoors: Colorado Outdoors is a 164-acre economic development project along the Uncompahgre River corridor. The project aims to attract outdoor-centric industries to Montrose and will also include river restoration, retail, residential and industrial development. More information can be found at ColoradoOutdoors.CO

About the City of Montrose: The mission of the City of Montrose is to promote the Montrose Lifestyle by providing innovative and service-oriented leadership for a vibrant community. The City is a Home Rule Municipality that is the county seat and the most populous municipality of Montrose County, Colorado. The city population was 19,132 at the 2010 United States Census. Montrose is located in western Colorado in the upper Uncompahgre Valley and is an economic, labor, and transportation waypoint for the surrounding recreation industry. More information can be found at cityofmontrose.org

About Alcorn Construction, Inc. Alcorn Construction is an award-winning general contractor specializing in relationship-based commercial office, light industrial, retail, multi-family, and senior living projects in the Denver Metro Area and along Colorado’s Front Range by Building with the Power of Partnership. The company lives by its mission to be a world-class construction company with a culture that secures its future by being a place where great people love to work and, in turn, customers are delighted. Learn more about Alcorn Construction’s focus on people, process, and partnership at alcornci.com.

View all Releases by Colleen Aller