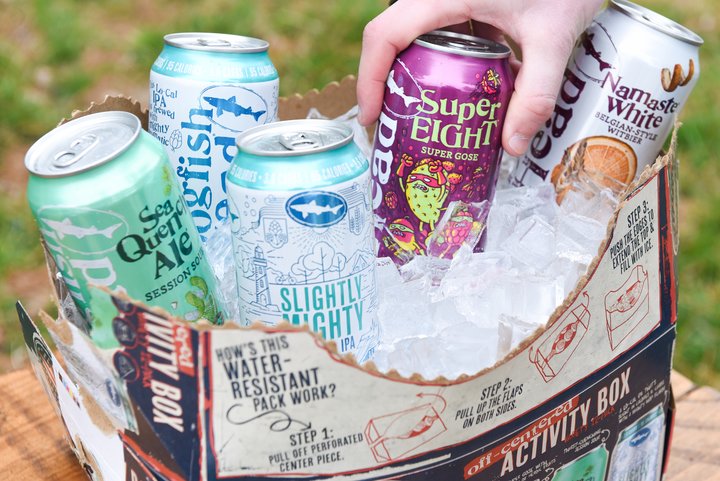 (Milton, Del., April 5, 2019) – As the warm weather rolls in, Dogfish Head raises a can to toast the upcoming season’s SWEAT-sational activities with its Off-Centered Activity Box. A summer-centric variety 12pk of cans perfect for beer drinkers with active lifestyles and conscience consumption mindsets, the Off-Centered Activity Box includes a selection of four sessionable sippers, including two fan-favorites – SeaQuench Ale and Namaste White – and two new off-centered ales – SuperEIGHT and Slightly Mighty. The Off-Centered Activity Box also doubles as a functional cooler (just pop it open and add ice), making it easy to transport to any summertime occasion.

“Around every corner a fresh and exciting experience awaits – a new trail to run, a new lake to stand-up paddleboard, a new road to pedal. All we have to do is go out and get after it,” said Sam Calagione, CEO and founder of Dogfish Head. “The Off-Centered Activity Box encourages folks to do just that. The definitive grab-and-go, beer-and-cooler experience, it offers active-lifestyle beer fans four intensely approachable, ultra-flavorful beers, all wrapped up in a water-resistant package that converts into a 100% recyclable cooler.”

Included in the Off-Centered Activity Box are three cans of each of the following beers:

NEW Release – Slightly Mighty – (4.0% ABV) A full-flavored, lo-cal IPA that is slight in calories and carbs, and mighty in hop character. Brewed with locally grown and malted barley, and a touch of monk fruit to add body and flavor without adding any calories or carbs, Slightly Mighty has all the aroma and essence of a world class IPA, but with only 95 calories, 3.6g carbs, 1g protein and 0g fat per 12oz serving.

NEW Release – SuperEIGHT – (5.3% ABV) A super-refreshing Super Gose brewed with eight heroic ingredients, including prickly pear, mango, boysenberry, blackberry, raspberry, elderberry and kiwi juices, and a dash of toasted quinoa, as well as an ample addition of red Hawaiian sea salt. These unique ingredients give SuperEIGHT a vibrant red color, delicious flavors of berries and watermelon, and a tart yet refreshing finish.

SeaQuench Ale – (4.9% ABV) A mash-up of a Kolsch, Gose and Berlinerweiss, this hybrid session sour is brewed with lime peel, black limes and sea salt. Objectively the most thirst-quenching beer Dogfish Head has ever brewed, it clocks in at 140 calories, 9g carbs, 2g protein and 0g fat per 12oz serving. Tart and refreshing with crisp flavors of lime, lightly bitter notes of black lime and a touch of salt on the tongue, SeaQuench Ale is currently the #1 selling sour beer in America.

Whether they are mowing the lawn or relaxing out on the boat, folks can pop the top on an Off-Centered Activity Box and celebrate the season with an ice-cold beer. All they have to do is tear open and unfold the box, add ice to the leak-resistant, wet-strength paperboard container and enjoy. The technology behind the Off-Centered Activity Box allows the carton to hold ice/water for up to six hours – enough time to complete a marathon or host one awesome backyard barbeque!

To learn more about Dogfish Head, or to find an Off-Centered Activity Box or the beers within it near you, visit dogfish.com.

Dogfish Head has proudly been focused on brewing beers with culinary ingredients outside the Reinheitsgebot since the day it opened as the smallest American craft brewery 24 years ago. Dogfish Head has grown into a top-20 craft brewery and has won numerous awards throughout the years including Wine Enthusiast’s 2015 Brewery of the Year and the James Beard Foundation Award for 2017 Outstanding Wine, Spirits, or Beer Professional. It is a 250+ coworker company based in Delaware with Dogfish Head Brewings & Eats, an off-centered brewpub and distillery, Chesapeake & Maine, a geographically enamored seafood restaurant, Dogfish Inn, a beer-themed inn on the harbor and Dogfish Head Craft Brewery, a production brewery and distillery featuring, The Tasting Room & Kitchen. Dogfish Head supports the Independent Craft Brewing Seal, the definitive icon for American craft breweries to identify themselves to be independently-owned and carries the torch of transparency, brewing innovation and the freedom of choice originally forged by brewing community pioneers.  Dogfish Head currently sells beer in 44 states and Washington D.C. For more information, visit www.dogfish.com, Facebook: @dogfishheadbeer, Twitter: @dogfishbeer, and Instagram: dogfishhead.