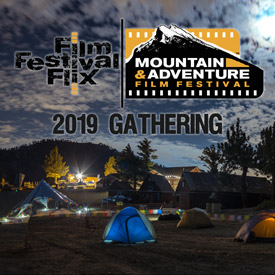 “I was really impressed by the overall quality of the films submitted this year. We had a really high percentage of films featuring people of color, women and many levels of ability. That was exciting to see!” shares Festival Programming Director and Channel Curator, James Edward Mills.

There we will host a two-night watch party featuring 24 of the best films from more than 100 entries. For more information about the 2019 MAFF Gathering visit: https://filmfestivalflix.com/festival/maff-gathering/

Presented in Association with the Lake Arrowhead Film Festival

Audiences who cannot attend the live MAFF Gathering and lovers of Mountain & Adventure Films can still be inspired throughout the year on the Mountain & Adventure Film Channel exclusively on Film Festival Flix. Many of the 89 Finalist Films will available throughout the year, streaming, on-demand, 24 hours a day, from any computer, smart phone, tablet, or internet connected TV. Viewers can watch and vote for their favorite films with a subscription or channel pass. Film categories on the Mountain & Adventure Film Channel include Climbing & Mountaineering, Bicycling, Paddling, Skiing and Snowboarding, Free Flight, Slacklining, Skateboarding, Surfing, Running and Hiking, Angler, Exploration and Adventure, Environmental Conservation, and Cultural. To learn more and to activate a free trial visit https://filmfestivalflix.com/festival/maff/

ABOUT THE MAFF GATHERING

The MAFF Gathering is a 3 day “gateway” festival connecting outdoor enthusiasts and the outdoor curious. Drawing from our lifetime of experiences and connections, we’re offering access to education, friendships, instruction, and resources to inspire and power your outdoor adventures! Attendees can campout for the weekend or join us for a day. Hang in the campground or explore the surrounding areas which offer access to climbing, slacklining, yoga in the forest, hiking, trail running, mountain biking, lake swimming, and downhill skateboarding. In the campground enjoy music, friendship, eating, drinking, and of course, watch awe-inspiring films after dark!

FILM FESTIVAL FLIX is a digital content platform that was founded with the mission to connect quality niche market and special interest films with interested audiences. The platform provides its proprietary technology, distribution, and marketing services to film festivals, media brands, and niche market distributors helping them to overcome traditional marketing obstacles standing in the way of reaching a greater audience. www.FilmFestivalFlix.com