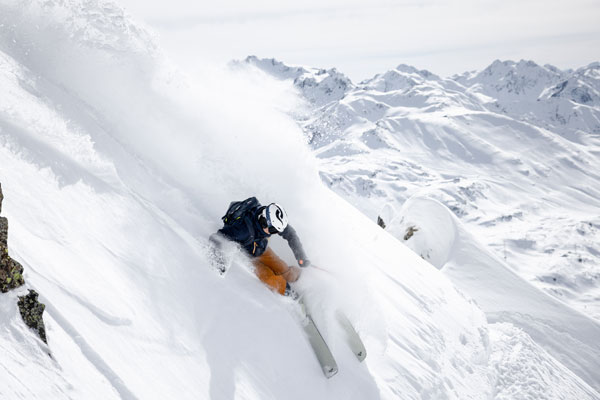 AUBURN, N.H. (Nov. 15, 2022) /OUTDOOR SPORTSWIRE/ – Fischer Sports announces a noteworthy year for the brand, with multiple skis and boots in the 2022/32 lineup tallying selections and awards. Fischer is sporting many new and redesigned ski and boot builds for this season’s lineup and testers and editors took note in both alpine and backcountry categories.

In the ski arena, the Ranger lineup swept multiple categories in Freeskier with the new Ranger 102 and 108 winning spots in the best Big Mountain Skis lineup and the Ranger 116 getting a place as one of the best Powder Skis. The 102 was also highlighted as a top ski pick by Freeskier’s female test crew in both the All-Mountain and Big Mountain categories.

Freeskier tester Casey Jillson explained, “Versatile and playful, the new and improved Ranger had my back from railing groomers to searching for leftovers in the trees,” of the 102.

For the Ranger 102 in the Big Mountain category, tester Matt Berkowitz noted, “This thing does it all…grips and rips on groomers, easy turn initiation, super versatile, wide enough to float in pow and the teal topsheet is dope.”

And about the Ranger 116, a Freeskier tester exclaimed, “Absolute charger of a ski. Honestly the most fun I’ve had on a ski all day. More, more, more! Didn’t want to clip out.”

Meanwhile, the Ranger 108 snagged a spot in the Outside Gear Guide as a top Powder ski for 2023, with tester Elyse Schreiber noting,  “While it’s made for powder, I felt confident on hardpack and crud, even at speeds.”

The all-new Ranger 96 also made a big splash in the Ski Magazine Gear Guide by being ranked as one of the top unisex all-mountain skis this year. Testers agreed it is an “energetic, nimble ski that remains dependable and balanced in all conditions for a wide variety of skiers.” Tester Otto Gibbons spoke to the universal performance of the Ranger 96 by claiming he “Could happily grab this ski, fly anywhere, and have a good time.”

In addition to the new ski lineup, Fischer’s boots were also turning tester’s heads this season. In particular, the new Fischer Pro 130 GW DYN and the Fischer Transalp Pro snagged top honors across the board.

The Fischer Ranger Pro 130 GW DYN boot received top awards from Freeskier for 2023. In Outside Magazine’s 2023 Gear Test, Fischer stood out with the Ranger Pro 130 GW DYN winning a podium spot in the 2023 lineup for best backcountry ski boots. Outside’s Aspen-based tester explained, “This is a great option for aggressive backcountry skiers, or people who want only one boot that can do it all and ski resorts more than the backcountry.” The Ranger Pro 130 GW DYN also stood out for its place in the Masterfit lineup, with testers commenting on how its “edge engagement was predictable, strong and quick.” And the Ranger 115 GW DYN also won a spot on the Masterfit list for its “stability and reliable edge-driving power.”

In Backcountry Magazine, the Transalp Pro boot got top accolades, nabbing a 2023 Editors’ Choice Award in the Sport Touring category. Backcountry Magazine tester Lance Riek noted, “With the lower Z buckle and upper buckles and power strap the Pro skis with aggressive stiffness but keeps the weight down.”

Jonathan Jay, Fischer Sports US’s content marketing manager notes of this year’s awards tally, “It’s awesome to see that publications are recognizing the incredible performance and versatility of Fischer’s freeskiing skis and boots. From the do-it-all Ranger 102 ski to the lightweight and dependable performance of the Ranger and Transalp Pro boots, Fischer keeps raising the bar every season for crafting world class products that enable everyone to ski more.”

Fischer’s vision is to be the winter athlete’s brand of choice through outstanding products, created for everlasting moments and new levels of individual performance. The privately held company employs nearly 2000 individuals who all share a passion for and dedication to winter sports. Fischer Sports GmbH was founded in 1924 in Ried im Innkreis, Austria, where the global headquarters is still located. Manufacturing takes place there and in Ukraine. For more information, visit www.fischersports.com