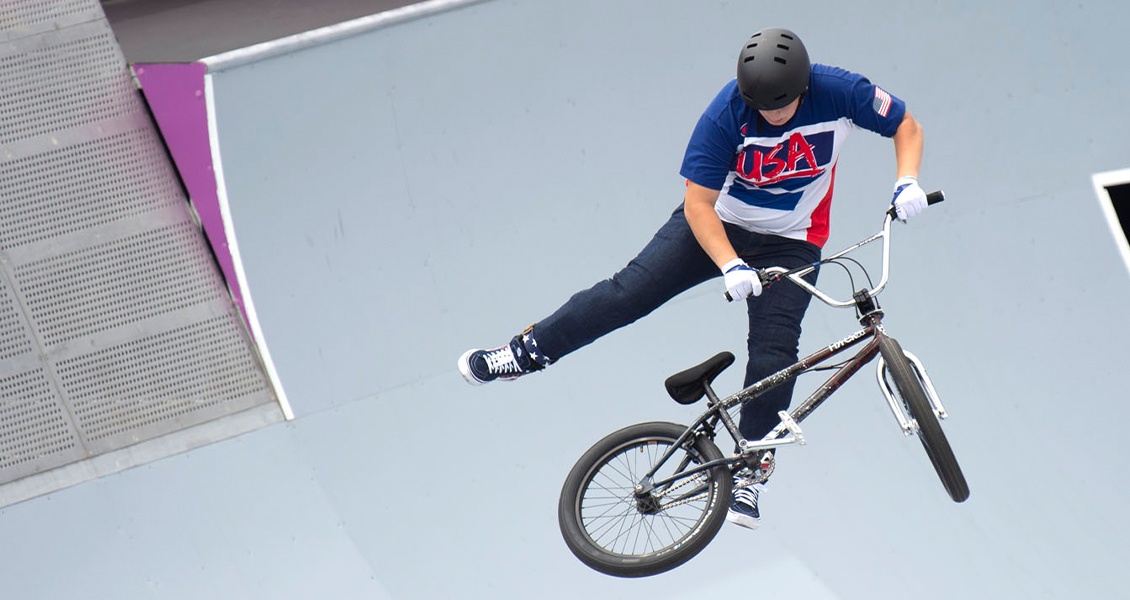 Nick Bruce and Justin Dowell will also compete in the finals.

The U.S. went into the Olympic Games as the top-ranked nation in both the men’s and women’s competitions, making the U.S. the only nation to have two riders per class, four total, competing with all other countries only having one per nation.

Benegas was the first U.S. rider to head out on the ramps. Her big air and complex tricks landed her a score of 84.80 ahead of other favorites Charlotte Worthington (GBR) and Nikita Ducarroz (SUI). Roberts showed the world why she is a three-time World Champion and wasted no time from the start. She opened with a tail whip, bar spin 360, and tuck no-hander, then threw a flare at the buzzer, giving her the best score of the day, an 89.80. The score moved her into the lead. After their first runs, Team USA held the top two spots, but there was still more work to be done.

Benegas took off for her second run with a tire grab turn down and consecutively mixed in so many tricks into her run. The judges came back with a score of 88.20, giving her the second-highest score of the seeding runs. Benegas’ final score came to 86.50, solidifying her second place.

“My plan going into this was to finalize my run and then add in tricks that I love to do. I did exactly that, so then I was just trying to stack up points. So now we’re sitting in a good spot heading into tomorrow,” said Benegas. “Honestly, grabbing big air is my favorite thing to do. I love to go fast, high and just utilize the course in unique ways. And blasting things is my favorite; I love the feeling.”

Roberts had another solid run, scoring an 85.60, bringing her average to 87.70, keeping her in the top spot. “I feel pretty good. I feel pretty confident. I’m super excited to go into finals, especially sitting in a high place. I’m just excited to see what tomorrow brings, and it’s going to be a good show for sure,” said Roberts. “After dropping in, the contest really just slipped my mind, and I went to just having fun and going back to riding like I usually do. That was pretty amazing to feel.”

The top three came down to the group of women who all train together in North Carolina, Roberts in first, Benegas in second, and Nikkita Ducarroz (SUI) grabbing third.

Today these riders made history. When Roberts was asked about what she wants people to take away from this Olympic event, she said, “I just hope people see the love that I have for the sport, and I put everything into it. I just love what I do, and it’s not just about me. There are so many other phenomenal riders, and I’m excited to see what everybody else does. The biggest thing I hope to show is the community that BMX has. No matter what place I get or what place my teammate gets, or whoever we’re competing against, I’m going to be right there to celebrate it with them. This is history, and this is a huge deal.”

The men were up next, with Dowell and Bruce riding for Team USA. Bruce admitted that he has been suffering from an injury he sustained in practice a few days ago and rolled his seeding run to preserve his body for the finals.

Bruce commented on his injury. “I’m just hoping my shoulder turns around in the morning. We did a lot of stuff to help it, so I think getting another full day of rest today can help turn it around tomorrow,” said Bruce. “I still feel [the injury] is really up in the air. If I put too much pressure on my arm, it just gives out. There’s zero strength in there at the moment. So I’d be putting myself at a lot of risk if I were to try to do what I have planned.”

BMX Freestyle Coach, Ryan Nyquist, also commented on Bruce’s run. “Nick had a big crash in practice, so we decided the best thing to do was to have him not do his runs today in hopes that he feels as good as possible for the finals tomorrow,” said Nyquist.

Dowell started with the weaker of his two runs, scoring a 69.80. However, he bounced back for his second run, mixing up his lines and getting some big air when going over the spine in the middle of the course. As a result, he garnered an 80.60 on his second run, seeding him into the eighth spot for tomorrow’s final.

With mental health being a big topic, especially at this Olympic Games, Roberts gave us more insight into how she is focusing and staying healthy.

Roberts said, “Before the Olympics, the main focus was my mental health. I was just making sure that I was liking everything that I was doing and that nothing that I was doing felt forced by anybody. In 2020, when [the Olympics] were postponed, every single day, no matter if I wanted to ride or not, I went and rode, and that took so much out of me because it just wasn’t fun anymore. I had to take weeks off, and obviously, my wife made me just go out and do things like fish and go on walks, and that’s when we got our first dog. All of that just added up. That’s the point where I realized that if I’m not having fun doing what I’m doing, then there’s no point. Mental health is everything, especially in our sport. It’s what causes us not to get hurt. If we’re not in the right headspace, it’s not going to be a good day. I pulled out of practice the first day 45 minutes early because of my mental health. I just wasn’t in the mindset to be riding. I tried, and I just couldn’t push through it. It is everything.”

Roberts, Benegas, Dowell, and Bruce will take to the park in the Olympics’ first-ever BMX Freestyle medal event. Finals will start with the women at 10:00 a.m. JST/ 9:00 p.m. EDT, then the men directly following.

Learn more about how to watch all cycling events, along with information on each discipline: BMX Racing, BMX Freestyle, Mountain Bike, Road, Track.

Visit USACycling.org for more information on events, membership programs, donations, and follow @USACycling across all channels for the latest on Team USA.