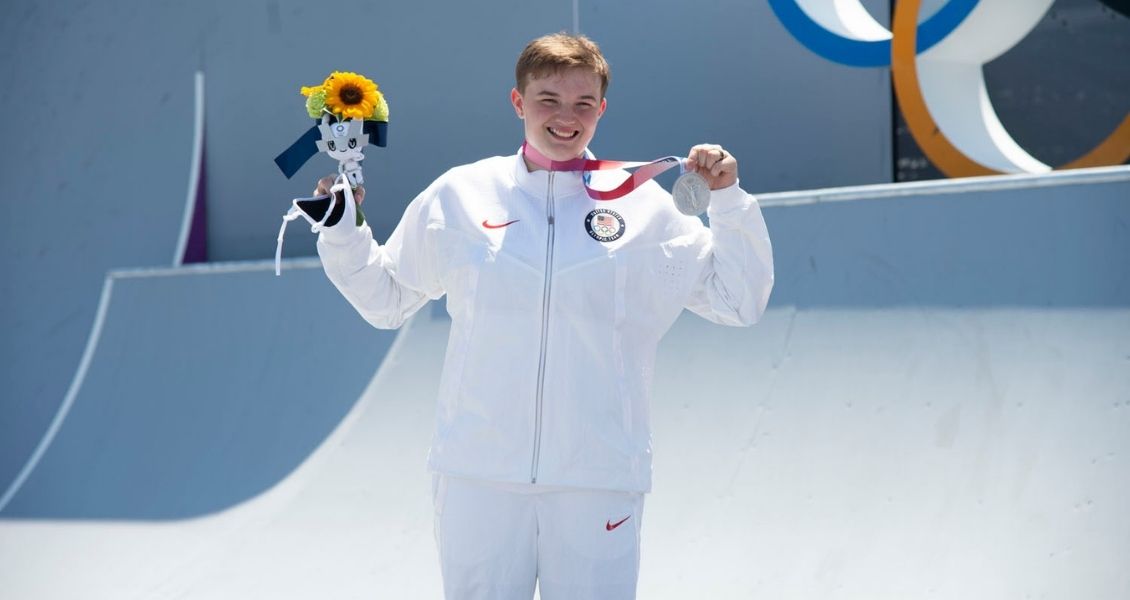 Perris Benegas misses the podium by just under a point.

TOKYO – On another hot day at the Ariake Urban Sports Park, BMX Freestyle made history. Based on the seeding results from Saturday, Perris Benegas (Reno, Nev.) and Hannah Roberts (Buchanan, Mich.) were the last two women to drop into the event, as they were the top two seeds. At the end of the competition, Roberts walked away with a silver medal around her neck.

In the BMX Freestyle finals, competitors are compared on the best of two 60-second runs. Benegas had a killer first run catching her signature big air and throwing tricks every chance she got. The 2018 World Champion finished her first run with an 81.20 putting her in fourth overall after everyone’s first runs. On her second run, Benegas redoubled her efforts, using more parts of the park, and using more of her favorite tricks (can-cans, toboggans, wheel grabs, and turndowns) to create new combinations adding more value to her run. As a result, the judges awarded her an 88.50 for her second run.

Three-time World Champion Roberts was the one to beat today, coming in as the top finisher yesterday. Roberts dropped in with a 360 barspin into a double tail whip and ended her run with a massive flare throwing her bike with excitement. She nailed an incredible run. Roberts was the first woman at the event to score above a 90.00, earning a 96.10! Coach Ryan Nyquist and Roberts celebrated as she made her way over to the Athlete Moment with NBC to talk to her family on zoom immediately.

“I was extremely nervous going into the event. I wanted to throw out a run like that, to get my nerves out of the way,” said Roberts. “To really do something like that, I mean, it might have been one of the best runs I’ve ever done. I was obviously super stoked. It was a great feeling.”

Charlotte Worthington (GBR) showed us a little bit of what she had in her first run but crashed attempting a first-ever 360 backflip in competition. However, she made up for it in her second run, landing the first-ever trick, throwing in a front flip, and just having a tremendous run. As Team Great Britain and Team USA patiently awaited the scores, the judges returned with a 97.50 for Worthington moving her into the lead.

The pressure was on for Roberts to win gold. She dropped in for her run and landed a tail whip just wrong, injuring her foot. Roberts called it from there and stopped settling for silver.

Roberts was happy with her silver medal. “Charlotte did some crazy things. I’m super stoked for her. There’s nobody else I’d rather take second to than Charlotte. She absolutely killed that. She’s been progressing a lot. When I saw her score, I knew it was well deserved,” said Roberts. “I knew that there were some things that I could do to improve my score and hopefully take that gold back. I messed up in the moment. That’s all it is. And I’m still stoked on silver.”

Roberts talked more about her lingering injury that ended her second run. “I injured my foot, actually, on the second day of practice. I’ve been in a walking boot ever since, but I’ve had a great medical staff who are taping me up every day and just taking care of it while I can.”

Nikita Ducarroz (SUI) had a killer first run earning her the bronze medal with an 89.20.

Still nursing an injured shoulder from earlier in the week, Bruce kicked off the Men’s competition as the first rider to drop. He kicked off his run with a toboggan off the elevated quarterpipe into a backflip over the box jump but pulled the plug on his run shortly after that in an effort not to further damage his shoulder.

Dowell was the next American to drop in. His first run from the top of the elevated quarterpipe and jumped over the spine with a 360 triple barspin. Unfortunately, with about 30 seconds left into his first run, Dowell put down a foot on his landing of a 540 over a box jump. In his second run, he pushed himself, starting from one of the quarterpipe decks. With more original lines and more speed to his run, he set himself for an epic run. Unfortunately, Dowell crashed while landing a trick during his last 20 seconds.

Reigning World Champion Logan Martin (AUS) threw down an epic first run, scoring a 93.30. That initial run would hold through all the second runs as the highest score for the men and end up earning him the gold. Veteran rider Daniel Dhers (VEN) proved that age was nothing but a number as he earned silver in the event. Worthington’s countryman Declan Brooks (GBR), had tremendous speed in the course and used that to claim the bronze.

Visit USACycling.org for more information on events, membership programs, donations, and follow @USACycling across all channels for the latest on Team USA.