inov-8 at the Forefront of Graphene Sports Footwear Revolution 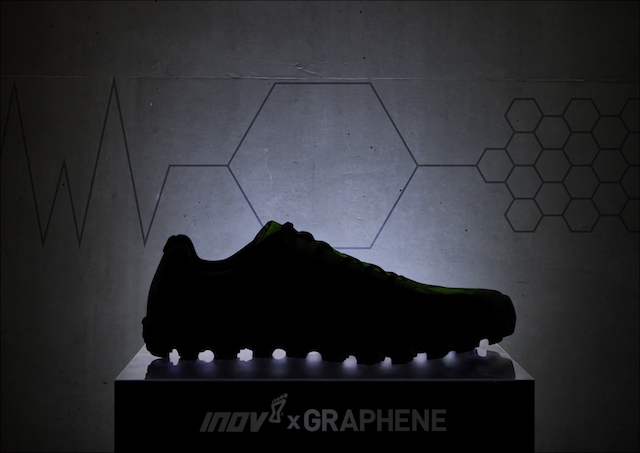 Southborough, MA (December 6, 2017) – inov-8 is launching a revolutionary world-first in the sports footwear market following a unique collaboration with scientific experts to bring Graphene to running and fitness shoes. The British brand, with a North American headquarters in Massachusetts, worked closely with The University of Manchester team that originally developed the material to become the first-ever company to do so.

In what may become a classic David vs Goliath story, this small brand aims to compete with much larger brands by working with groundbreaking scientists on this truly revolutionary material. Graphene promises to change the way consumers think about outsole durability, flexibility and stickiness – wet or dry.

It’s this type of collaboration – which resulted in inov-8’s patent-pending technology – that will help a small brand compete. inov-8 CEO Ian Bailey says, “Product innovation is the number-one priority for our brand. It’s the only way we can compete against the major sports brands. The pioneering collaboration between inov-8 and the National Graphene Institute at The University of Manchester puts us at the forefront of a graphene-powered sports-footwear revolution.

“And this is just the start, as the potential of graphene really is limitless. We are so excited to see where this journey will take us.”

Laboratory tests have shown that the rubber outsoles of these shoes, which will come to market in summer of 2018, are 50% stronger, more durable and more flexible than traditional outsole materials on the market today. In lay terms that means the outsole should last twice as long as most current shoes with no weight or flexibility penalty.

Graphene – for whom the developers at the University of Manchester won the Nobel Prize in Physics – is the thinnest material on earth and is 200 times stronger than steel and a mere fraction of its weight. First isolated by the team in 2004, it’s the world’s first two-dimensional material at just one-atom thick and has the potential to revolutionize far more than just the sports world, with vast implications in the medical, electronics, automotive and aerospace industries.

But inov-8 is focused on using it to make the best running and fitness shoes ever. Product and Marketing Director Michael Price says: “Off-road runners and fitness athletes live at the sporting extreme and need the stickiest outsole grip possible to optimize their performance, be that when running on wet trails or working out in sweaty gyms. For too long, they have had to compromise this need for grip with the knowledge that such rubber wears down quickly.

“Now, utilizing the groundbreaking properties of graphene, there is no compromise,” he adds. “The new rubber we have developed with the National Graphene Institute allows us to smash the limits of grip. Our lightweight G-Series shoes deliver a combination of traction, flexibility and durability never seen before in sports footwear. 2018 will be the year of the World’s Toughest Grip.”

Graphene is produced from graphite, which was first mined in the Lake District fells of Northern England over 450 years ago. inov-8 too was forged in the same fells, albeit much more recently, in 2003. The brand now trades in 68 countries worldwide.

Dr Aravind Vijayaraghavan, Reader in Nanomaterials at the University of Manchester, says: ““Despite being the thinnest material in the world, graphene is also the strongest, and is 200 times stronger than steel. It’s also extraordinarily flexible, and can be bent, twisted, folded and stretched without incurring any damage. When added to the rubber used in inov-8’s G-Series shoes, graphene imparts all its properties, including its strength. Our unique formulation makes these outsoles 50% stronger, 50% more stretchy and 50% more resistant to wear than the corresponding industry standard rubber without graphene.

“The graphene-enhanced rubber can flex and grip to all surfaces more effectively,” he continues, “without wearing down quickly, providing reliably strong, long-lasting grip. This is a revolutionary consumer product that will have a huge impact on the sports footwear market.”

For more information on the Graphene Institute:

Founded in 2003, inov-8 is one of the world’s leading off-road running brands for footwear, apparel and equipment. The brand is renowned for delivering the ultimate is grip. inov-8’s origins and footprints are etched in the muddy British fells and trails but over the years the company has optimized its products to meet the needs of all terrains worldwide. Discover more: www.inov-8.com