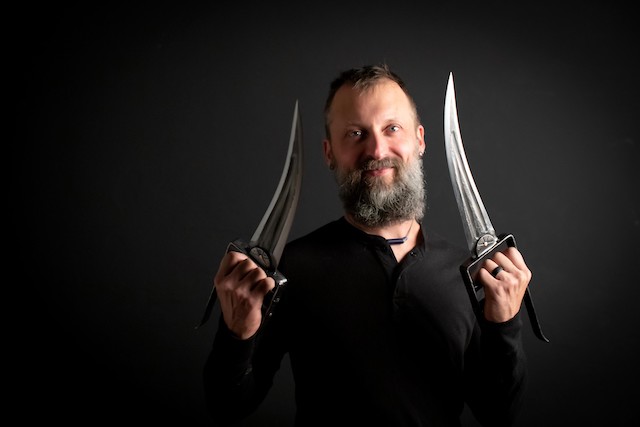 Sylva, NC — March 31, 2022/OUTDOOR SPORTSWIRE/ – Local blacksmith Matthew Shirey, founder of Sylva-based Shira Forge and an award-winning creator of iron knives, axes, and cookware, is thrilled to announce his win in a recent episode of the History Channel’s “Forged in Fire” television series. This competitive reality television series follows four of the nation’s finest bladesmiths each episode as they battle for a $10,000 cash prize by recreating iconic weapons.

Shirey has been creating goods for over twenty years and launched Shira Forge in 2005. He first applied to be a contestant on “Forged in Fire” years ago but didn’t make it past the initial interview. Shirey persevered and applied two more times, finally getting the call that he’d been chosen last fall. Unfortunately, he contracted COVID days before he was supposed to begin filming and had to bow out. Months later Shirey received another call and this time, he was able to make the trip to Stamford, Connecticut to take part in the competition, which proved tougher than he had imagined.

“Each episode centers around a specific challenge, and our challenge was to find a usable piece of steel from a crushed car to forge a large knife, which would then be tested by chopping a car hood and slicing jugs of antifreeze,” says Shirey. “To see how it all plays out, you’ll have to watch the episode, but I will say I had a fantastic time, and it was really special to have crews come to my hometown of Sylva to tape the final round.”

Shirey’s winning creation, a katar style dagger, will remain on the “Forged in Fire” set to be displayed with winning weapons from previous competitions. He plans to use the prize money to invest back into his business and take a family vacation. Shirey’s episode of “Forged in Fire” aired on the History Channel on March 30. For more information on Matthew Shirey and Shira Forge, please visit shiraforge.com. For media inquiries and product sampling opportunities, please contact Suzanne Hermann at suzanne@darbycommunications.com.

Shira Forge, a studio dedicated to creating hand-forged knives, axes, and cookware, has been family owned and operated in North Carolina since 2005. Their goal is to not only create beautiful objects but also to master ancient techniques and pass that knowledge on to further the craft. Learn more at shiraforge.com.