Made in the Mitten – A Story of Snowboarding 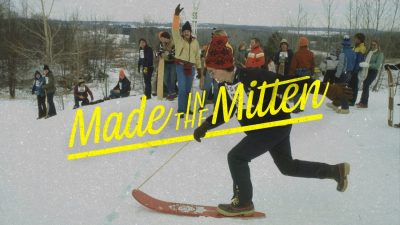 Harkening back to the original days of Snurfing, as popularized by inventor Sherman Poppen in 1965 in Muskegon, Michigan, Made in the Mitten follows the pow-filled evolution of snurfing to snowboarding.

During production of the film, Zeerip discovered a grocery bag full of undeveloped 8mm film from the early 70’s, a treasure-trove of unseen snowboard history showcasing the origins of snurfing alongside skateboarding and surfing in Michigan.

“55 years after Poppen took his daughters’ skis on Christmas Day and created the first Snurf board, we are watching riders over nine different disciplines of snowboarding, from Big Air to freestyle, all over the slopes, and in competitions all the way up to the Olympic Games,” said director Zeppelin Zeerip. “I was inspired to pay homage to Poppen and Burton, who both sadly left us just last year, and recognize the Michigan-based origins of this phenomenal sport, which has changed the landscape for counter-culture snowsports at its core.”

Supported by Michigan-based brewery and distillery, New Holland, a brand rife with snow and snowboarding enthusiasts, as well as Burton Snowboards, the film is a powerful, energetic and respectful nod to the brains behind the sport that has now shaped millions of riders around the world.

“Snowboarding season is anxiously awaited every year here in Michigan”, said New Holland Brand Marketing Manager, Adam Dickerson. “It allows us the opportunities to challenge ourselves, to breathe in the fresh winter air and to enjoy the outdoors with friends during an otherwise isolating time of year. The apres beer is pretty great too. The snurfer first touched snow only 30 miles north of our brewery and we are thrilled to support the making of this film, celebrating the founders, the creativity and the ingenuity here in our part of the state.”

Made in the Mitten is an 8-minute short film, available to view on:

New Holland Brewing Company’s deep roots in the craft industry go back to 1997. Our role as an integral member of the artisan approach is something we take seriously, yet engage lightheartedly. We believe the art of craft lives in fostering rich experiences for our customers, through creating authentic beer, spirits and food while providing great service. Recognized for our creativity and artistry, our mission to improve the lives of craft consumers everywhere is seen in our diverse, balanced collection of beer and spirits. W: NewHollandBrew.com I: @newhollandbrew

In 1977, Jake Burton Carpenter founded Burton Snowboards out of his Vermont barn and dedicated the rest of his life to snowboarding. Since its founding, Burton has played a pivotal role in growing snowboarding from a backyard hobby to a world-class sport by creating groundbreaking products, supporting a team of top snowboarders and pushing resorts to allow snowboarding. Today, Burton designs and manufactures industry-leading products for snowboarding and the outdoors. As a sustainability leader within the outdoor and winter sports industries, Burton is the world’s first snowboard company to become a certified B Corporation®. Privately held and owned by Donna Carpenter, Burton’s headquarters are in Burlington, Vermont with offices in Austria, Japan, Australia, Canada and China. For more information on Burton, head to www.burton.com and follow our line at facebook.com/burtonsnowboards, twitter.com/burtonsnowboard and @burton on Instagram.