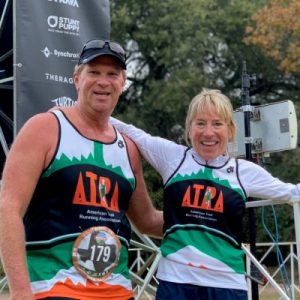 This three-tiered event kicks off with the first installment on September 1, and will continue through the end of the year. This virtual challenge celebrates ATRA’s 25th anniversary, which is coming up in 2021.

Runners around the globe are invited to register and participate in a fun, virtual challenge complete with regional and individual leaderboards as well as weekly trail teasers published on ATRA’s 25th Anniversary Challenge Facebook Group. Regions include the Northeast, South, Midwest, West, and International and will be captained by five individuals who will help inspire and motivate the participants in their regions.

Sherb (a.k.a. Robert Sherburn) (Dallas, TX) – Southern region. Sherb loves cooking, running, skiing, hiking, cycling, skydiving and generally anything outdoors.  He is a certified RRCA running coach, and has worked in the athletic event space since 2011 executing events with Ironman, Cadence Sports, NYRR, and RAM Racing to name a few.  “After working race operations for events across the country and travelling with a national race series, and I’ve aligned my efforts in the trail running niche by partnering with ATRA, The US Trail Running Conference, and TransRockies Race Series events.   I look forward to helping y’all reach your goals, so let’s have some FUN during the #ATRAchallenge25!”

Roy Pirrung (Sheboygan, WI) – Midwest region. Pirrung’s first race was at age 32 in 1981, shortly after he kicked a two-pack-a-day cigarette habit. In 2007, he was named the masters ultra runner of the year for his stellar campaign in the 2007 season. Pirrung earned the title of best masters’ ultra man by dominating his age group in 2008, in championship races from 50 miles to 24 hours. He is a motivational speaker and continues to race on the trails, track, and road.

Nancy Hobbs (Colorado Springs, CO) – Western region. Hobbs is the founder and executive director of ATRA and has been running trails and directing running events since the mid-80s.  She is the co-author of 4 Trail Running Guide Books and the Ultimate Guide to Trail Running.  Still competing on the roads and trails, her passion for the sport hasn’t waned since she ran her first race in 1980.

Peter Maksimow (Manitou Springs, CO) – International region. Maksimow was a member of Team USA’s silver medal-winning team at the 2015 World Long Distance Mountain Running Championships in Zermatt, Switzerland. He is an inov-8-sponsored trail runner who has raced and traveled extensively around the world. He also imbibes in fine beers and once organized a beer mile race at the 14,115-foot summit of Pikes Peak and up the 2,000-foot Manitou Incline.

Follow ATRA’s 25th Anniversary Challenge with timely articles and photos at trailrunner.com and on social media referring to #ATRAChallenge25. Participants in the challenge should follow their state and/or local health guidelines. Participants of all abilities are invited to join the challenge, but must be at least 16 years of age. Running, walking, and hiking can all be tracked in the challenge.

FitRankings is connecting the world through fitness. Based in Austin, Texas, FitRankings is a leader in digital fitness challenges and virtual racing. FitRankings technology features a universal platform that connects to the latest apps and wearables. FitRankings provides organizations enterprise software tools, security, and support to create authentic and engaging digital fitness experiences for their communities. Learn more HERE.

ATRA is a non-profit 501 (c) 3 corporation based in Colorado. Founded in 1996, ATRA’s mission is to promote trail running, mountain running, ultrarunning on trails, and to provide resources for race directors and participants in our sport. Learn more about ATRA and the Event Standards Program HERE. To become an ATRA member click HERE.

ATRA will again partner with Active at Altitude for the eighth annual US Trail Running Conference slated to be held October 21-24, 2020 in Fayetteville, AR, with a hybrid option for those who want to join virtually. Additionally, ATRA is the fund raising arm for the U.S. Mountain Running Team.

Nepal suspends access to Mount Everest after a local virus case is detected.