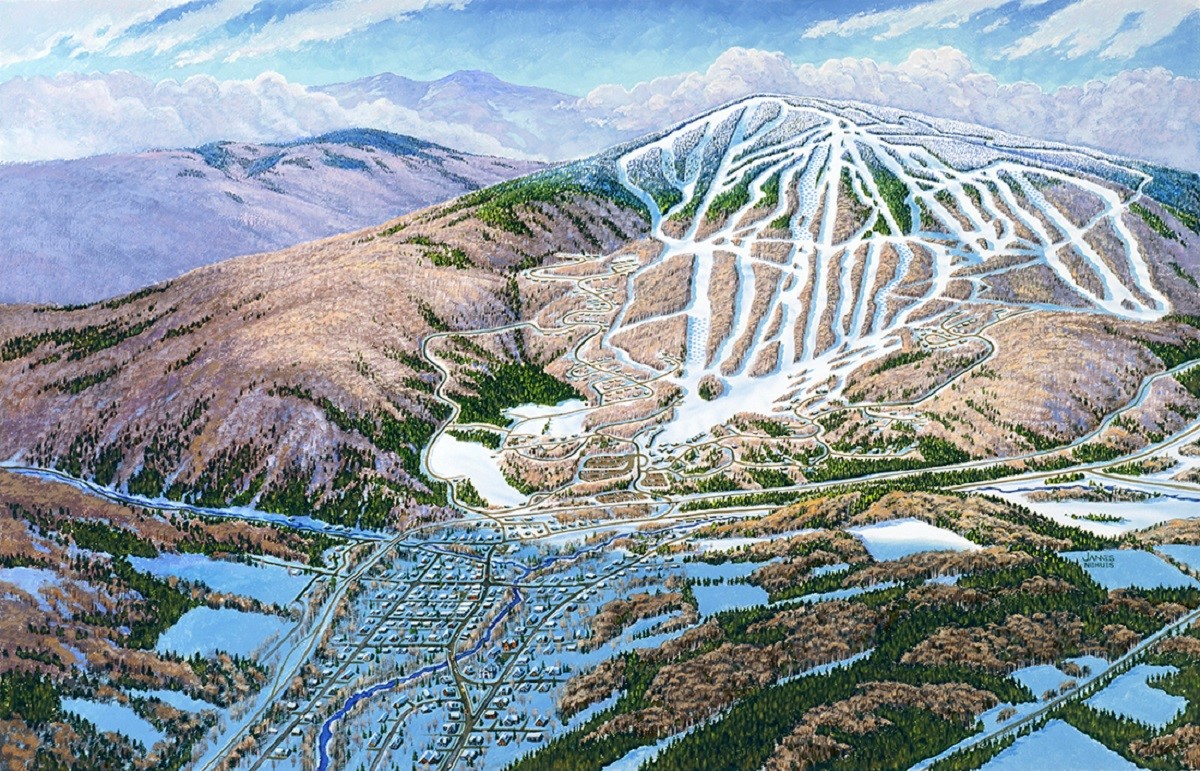 Proceeds from Okemo and Sun Valley auctions will go to support the U.S. Ski and Snowboard Hall of Fame

DENVER (March 15, 2022) /OUTDOOR SPORTSWIRE/ – The inimitable artist responsible for crafting intimate depictions of more than 200 ski areas across the globe is set to release more than two dozen original artworks of famed resorts in Vermont, New Hampshire and Idaho for public purchase. That artist, James Niehues, has spent more than 35 years creating ski maps that have been as integral to a day on the mountain as skis, and he’s opening up his personal vault once again to offer originals from 10 different resorts. Fans and avid skiers will have the chance to own an original rendering of their favorite resort beginning on March 17, 2022. All proceeds from the Okemo and Sun Valley sale will go to support the U.S. Ski and Snowboard Hall of Fame.

The successful sale of previous Niehues works featuring resorts across the western United States – as well as NFT’s and other product partnerships – has resulted in $120,000 kickstarter campaign to support Stark Mountain Foundation in support of Mad River Glen, $70,000 to benefit the Colorado Snowsports Museum, and $20,000 for the National Ability Center. Now, as a member of the 2019 inductee class, Niehues now looks to champion the U.S. Ski and Snowboard Hall of Fame as they continue to honor and celebrate the athletes and snow sport pioneers who have made a significant impact on skiing and snowboarding in America.

“The paintings and sketches in this release are some of the oldest pieces in my collection, and I’m thrilled to be able to help support the U.S. Ski and Snowboard Hall of Fame with proceeds from my original Okemo and Sun Valley paintings,” says James Niehues. “There are so many icons in the ski and snowboard world that have called these mountains home, many of whom are in the Hall of Fame, and I’m proud to support their commitment to the preservation of skiing history.”

In addition to the original art, limited-edition, large format canvas prints featuring Okemo, Stowe, Sugarbush and Look will also be available at jamesniehues.com.

“Open Road Ski Company has been fortunate to work with James on projects ranging from the release of The Man Behind the Maps to curating the collections of his original art,” says Todd Bennet, co-founder of Open Road Ski Company. “My co-founder Ben Farrow and I are thrilled for James to be inducted into the U.S. Ski and Snowboard Hall of Fame, and we’re pleased to be working alongside him to show the organization his appreciation.”

For over 30 years, James Niehues’ maps have been integral to the enjoyment of skiers and snowboarders at resorts and mountains across the globe. He has painted nearly every ski resort in North America, plus ski maps on four other continents over the course of his inimitable career.  Each map is hand-crafted over several months, and many are still in use today. His recent book, The Man Behind the Maps – a compilation of the more than 200 individual trail maps he has painted – is loved by skiers and snowboarders around the world. His book was the top selling ski book of 2020 and has over 500 five-star reviews.

Open Road Ski Company is an independent outdoor media and publishing company launched in 2018 by two passionate skiers, Ben Farrow and Todd Bennett. Their first Kickstarter project, James Niehues: The Man Behind the Maps, became Kickstarter’s top grossing Art Illustration project of all-time. Last year, they raised over $120,000 for the Stark Mountain Foundation in support of Mad River Glen and over $70,000 to benefit the Colorado Snowsports Museum. This year, they raised $20,000 to benefit the National Ability Center.

About US Ski and Snowboard Hall of Fame

The US Ski and Snowboard Hall of Fame’s mission is TO HONOR AND CELEBRATE the athletes, pioneers and visionaries of the United States who have significantly enriched the global sports of skiing and snowboarding, and to showcase their stories and historic memorabilia in their national museum located at the birthplace of organized skiing in America, Ishpeming, Michigan. The Hall will officially induct Jim Niehue on March 26th, 2022 at an Induction Celebration in Sun Valley, Idaho. Jim is the 447th member named to the NATIONAL hall since 1956.