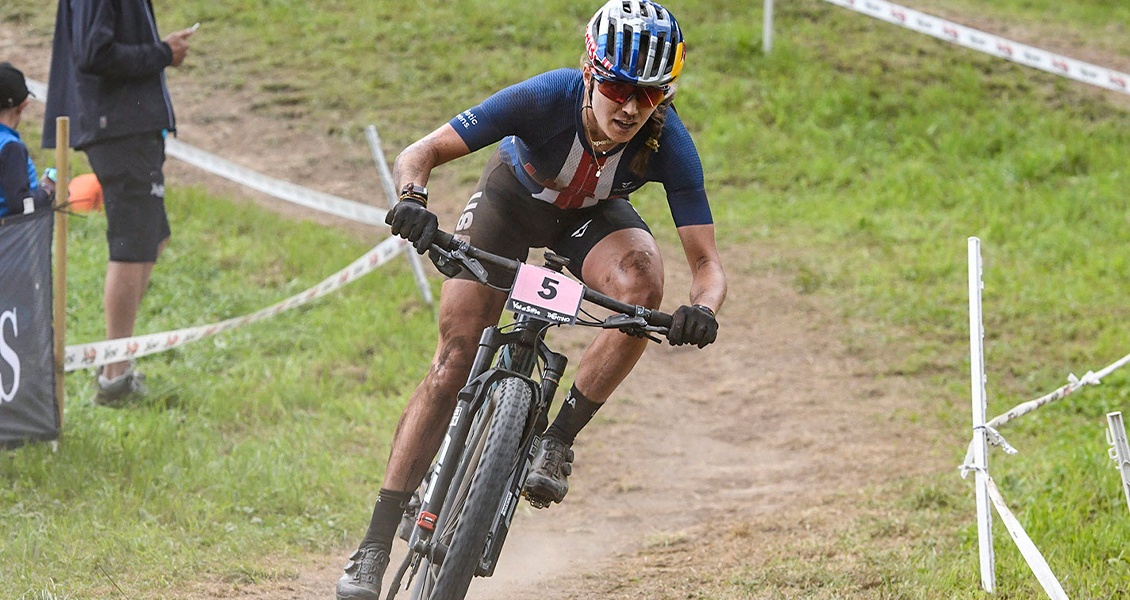 Gwendalyn Gibson was the best American finisher on the day racing to a Top-10 in her last U23 race.

VAL DI SOLE – TRENTINO, Italy – Today was all about the cross-country racers as they took to the technical and dusty course in Italy. The day started off with the Under-23 racers and ended with crowning new Elite World Champions.

Gwendalyn Gibson (Ramona, Calif.; Norco Bicycles) had a breakout ride in her last year racing U23. She stayed in the top-10 all day, charging on every climb. She finished ninth, making it her best World Championship performance to date. Gibson said, “It feels really good. I’ve had a bit of an up and down season, so I am so happy things finally came together on the right day. Of course, I’m always wanting a bit more, but It was a great day for me and definitely a step closer to where I want to be!”

The U23 Cross-country National Champion Savilia Blunk (Inverness, Calif.; Orange Seal Racing) had a great start lap coming around in the lead group and sitting in seventh. On Lap 1, she had a mechanical that kept her in the tech zone for a few minutes, dropping her down to 52nd place. However, she put up a big fight, stayed calm, and passed 23 riders, finishing in 29th. Madigan Munro (Boulder, Colo.; Trek Factory Racing) started in the back of the group and had a hectic first couple of laps. The Junior Cyclocross Worlds medalist finished 18th in her first year in the U23 category.

In the U23 Men’s race, there were high hopes for Riley Amos (Durango, Colo.; Bear National Team) after his incredible in the UCI Mountain Bike World Cup season. After a podium in every World Cup he entered, one of them being a win, the pressure was on for the World Championships. After several hard laps pushing the pace in the lead group, Amos was not able to keep up with race winner Martin Vidaurre Kossmann from Chile. Unfortunately, Amos was cracked and lost several positions finishing in 15th. Bjorn Riley (Boulder, Colo.; Bear National Team) and Robbie Day (Evergreen, Colo.; Bear National Team) didn’t have great starting positions on the line, giving them a lot of work once the gun went off. One by one, the riders made their way up, with Riley finishing in 33rd and Day in 37th. That meant Day had passed 48 people in 5 laps which is quite the feat.

The Elite Women’s XC race was all Evie Richards (GBR), who moved into the lead by lap two and kept it until the finish line winning the World Championships. For Team USA, it was a tough day in the office. Kate Courtney (Kentfield, Calif.; SCOTT-SRAM Factory Racing) had a great first lap pushing with the lead group, and Haley Batten (Park City, Utah; Trinity Racing) was not too far behind. Unfortunately, the Olympians seemed to have both crashed early in the race and found themselves just outside the Top-20. Kelsey Urban (Kentfield, Calif.; Team 31: Outride) and Hannah Finchamp (Salt Lake City; Orange Seal Off-Road Team) also competed, riding close together most of the race. After a crash last weekend at the Swiss Cup, Lea Davison (Jericho, Vt.; Team TWENTY24) admitted that she was still suffering from concussions symptoms and made the wise decision to remove herself from racing this week.

Christopher Blevins (Durango, Colo.; Trinity Racing) had quite the week so far, winning three medals in the Team Relay, Short Track, and E-MTB events. Blevins sat in the Top-20 early on in the XCO race and worked with a group to maintain their positions. Toward the front of the race, Victor Koretsky (FRA) took an early lead but was then caught by the Swiss train of Mathias Flueckiger and Nino Schurter. The two took off and remained in the front of the race from lap two. It came down to a sprint on the last lap where Schurter made a move on the last half of the course and sprinted to the line, winning his ninth World Championship. Flueckiger finished two seconds back. Luke Vrouwenvelder (Chapel Hill, N.C; Giant Factory Off-Road Team) and Stephan Davoust (Durango, Colo.; Giant Factory Off-Road Team) also battled on course today.

Visit USACycling.org for more information on the athletes, events, and membership programs, and follow @USACycling across all channels for the latest on Team USA.