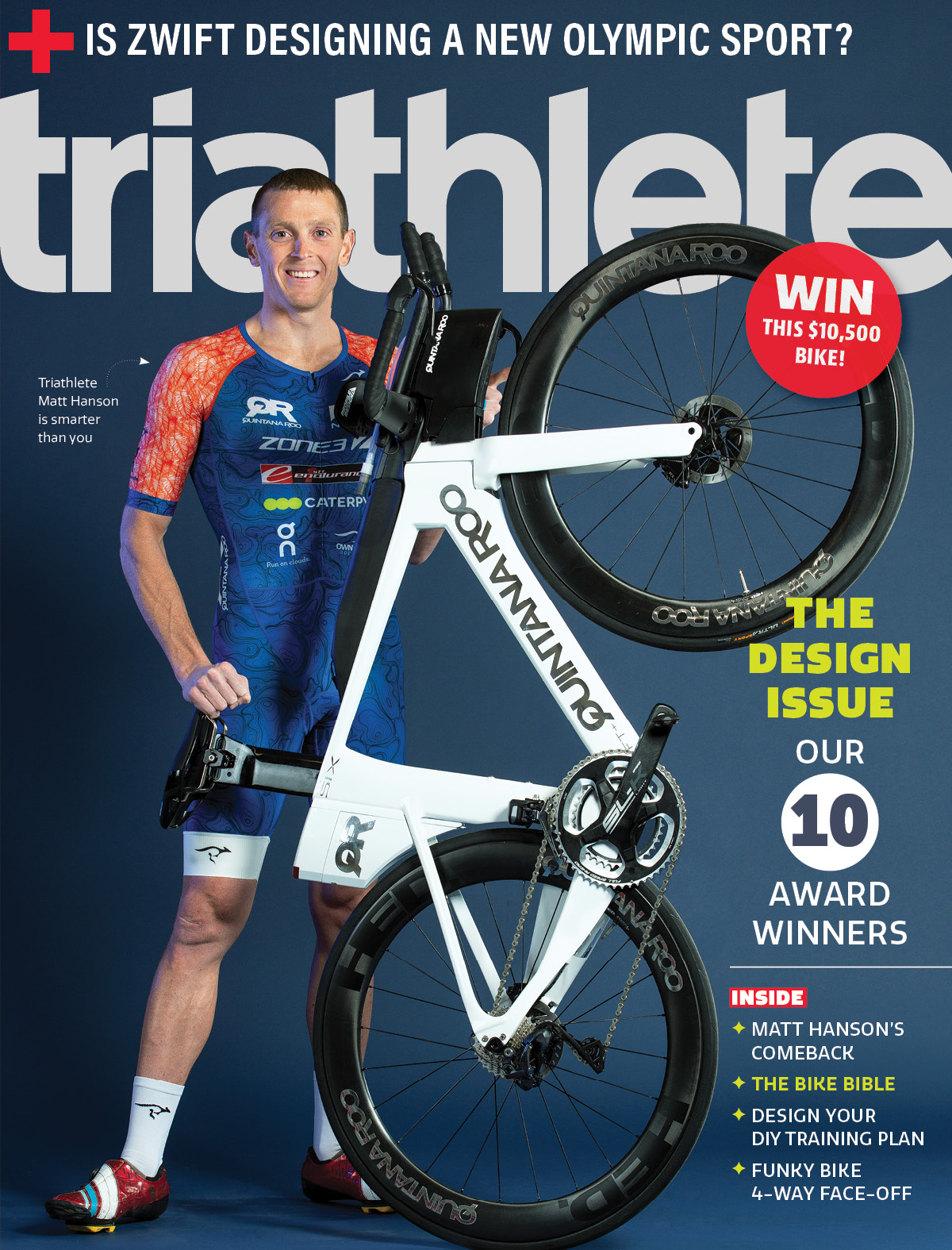 Boulder, Colorado, USA — February 24, 2020 —Triathlete, the world’s #1 triathlon resource, has recognized 20 product innovators for excellence in design in its March/April magazine issue. While other sports wait for trends to come to them, triathlon has a long, rich history of living at the cutting edge of technology and design. Triathlete’s expert panel considered the most exciting and impactful people and products of the past year to see who has excelled. Considered in this issue are Eric Min, CEO and Co-Founder of Zwift, the Peakers online training service and mobile app, and 18 other works of innovative minds in multisport. Triathlete’s Design Awards issue mailed to subscribers on February 18, pushes to digital subscribers on February 25, and releases on newsstands on March 10.

The cover of Triathlete’s first ever Design Awards issue features a Quintana Roo PRsix2 triathlon bike, which is the grand prize of its annual WIN THIS BIKE! contest. The bike was recognized in the issue’s Most Beautiful Design category. This Quintana Roo PRsix2 Disc Ultegra Di2 with Hed Vanquish 6GP wheels is worth $10,495, making it the most valuable triathlon bike Triathlete has ever given away. Triathlete’s WIN THIS BIKE! Contest is now open at triathlete.com/winthisbike and will close to new entries on May 15. The lucky winner of Quintana Roo’s most advanced triathlon bike will choose their bike size, crank length, and the paint color of the bike’s signature QBox.

Triathlete’s Design Awards issue and bike giveaway kicks off a year of new, reconsidered triathlon gear reviews. The magazine’s past Buyer’s Guide special issue will be replaced with year-round, monthly online gear reviews of multisport product categories. All the triathlon gear that Triathlete reviews will be individually tested by a diverse panel of expert gear reviewers, making Triathlete’s gear reviews the most trusted in the sport. “Triathlete’s online buyer’s guides are the sport’s ultimate gear bible for new triathletes and for those upgrading in pursuit of their best tri season yet,” said Editor-in-Chief Kelly O’Mara.

“Our experts are always looking for the next generation of triathlon equipment that will make training and racing more fun—and make you faster,” said Triathlete gear editor Chris Foster. “Our 2020 gear coverage will kick off with the Triathlete Design Awards in the March/April magazine issue. Then each month we will release a new buyer’s guide on Triathlete.com. All year, triathletes will get the freshest reviews on the newest gear from bikes to running shoes to bike helmets to wetsuits.”

Triathlete’s 2020 WIN THIS BIKE! Contest kicked off on February 20, when magazine subscribers started receiving their March/April issues in the mail. This magazine issue features the Quintana Roo PRsix2 on the cover, ridden by Matt Hanson, multi-time Ironman champion and owner of the fastest Ironman run split. Single copies of the magazine are now shipping from velopress.com and will be released in the U.S. on newsstands on March 10. The digital edition will push to subscribers on February 25 through the Triathlete mobile app, ZINIO, Amazon Kindle, Readr app, and Google Play.

The Historic Ski Descent of Half Dome