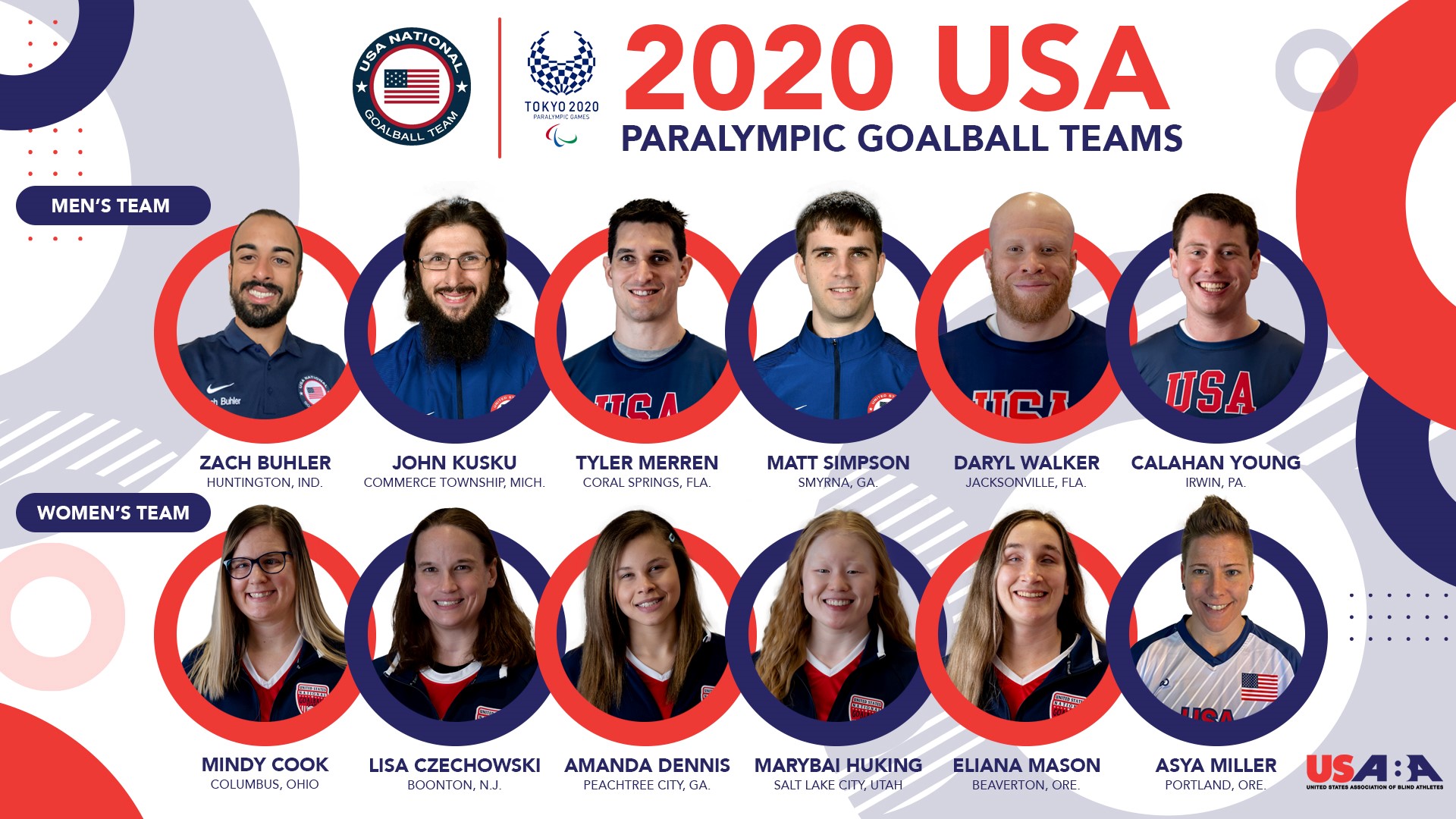 FORT WAYNE, INDIANA (June 9, 2021) – The United States Association of Blind Athletes has revealed the 12 athletes selected to represent Team USA at the Tokyo 2020 Paralympic Games in the sport of goalball. The announcement was made Wednesday at Turnstone Center, an official U.S. Olympic & Paralympic Training Site in Fort Wayne, Indiana, and home to the Goalball Center of Excellence and the USA Goalball Resident Athlete Training Program.

At the Rio 2016 Paralympic Games, the U.S. was the only country to have both its men’s and women’s teams reach the podium as the U.S. men’s squad captured the silver medal and the women’s team claimed the bronze. Nine of the 12 athletes named on Wednesday are returning Paralympians from the Rio Games and they boast a combined 21 Paralympic Games appearances and 14 Paralympic Games medals.

Kusku, Merren, Simpson and Walker all return from the silver-medal winning men’s squad in Rio. For Merren, Tokyo will mark his fourth Paralympic Games. He also won a bronze medal at the Athens 2004 Games and was a member of the Beijing 2008 Paralympic Team along with Walker, who will be participating in his third Games. Buhler and Young will be making their Paralympic Games’ debuts in Tokyo.

The U.S. men’s team is fresh off a victory over defending Paralympic champion Lithuania in the finals of the Trakai Tournament last month.

“After the USA Men’s Goalball Team’s performance and victory at the Trakai Games, I’m fully confident that the six athletes selected for the Tokyo Paralympic Games will represent our nation well,” U.S. Men’s Goalball Head Coach Keith Young said. “We have veterans who have prior Paralympic Games experience as well as strong newcomers. Our program has moved through having a relatively new coaching staff brought on and a renewed focus on high performance programming, in addition to dealing with the COVID pandemic. I fully believe that we have a team where all six athletes can contribute on the court and face the best teams in the world.”

On the women’s side, the team is awash with experience with five of the six members returning from the bronze-medal winning Rio squad. Czechowski and Miller have been side-by-side for the last five Paralympic Games and Tokyo will mark their sixth straight Games together. As goalball teammates, they won silver in 2004, gold in 2008, and bronze in 2016. Prior to that they both competed in discus at the Sydney 2000 Paralympic Games where Czechowski was the silver medalist and Miller took the bronze. Dennis will be participating in her third straight Paralympics, while Huking and Mason will make their second straight appearance. For Cook, Tokyo will be her Paralympic debut.

“Choosing the final roster for an event as prestigious as the Paralympic Games is never easy,” said U.S. Women’s Goalball Head Coach Jake Czechowski. “The depth of our player pool made this year’s selection especially difficult. We have great veteran leadership and experience with a combined 14 Paralympic teams. I expect our team to be ready for all the challenges and excitement that the Paralympics provides. This year, with all the changes and new protocols due to COVID, experience will be that much more valuable. The competition has never been stronger in women’s goalball, and we look forward to taking the court and competing against the best teams in the world.”

Alternates for the men’s team are Cody Carmicle (Lafayette, Ind.) and Sean Walker (Winchester, Va.), while Shavon Lockhardt (White Plains, N.Y.) will serve as alternate for the women’s team.

All selections to the Tokyo 2020 U.S. Paralympic Team are subject to approval by the United States Olympic & Paralympic Committee. The Tokyo 2020 Paralympic Games goalball competition begins on Aug. 25 with the medal matches taking place on Sept. 3.

‘I was completely inside’: Lobster diver swallowed by humpback whale off Provincetown