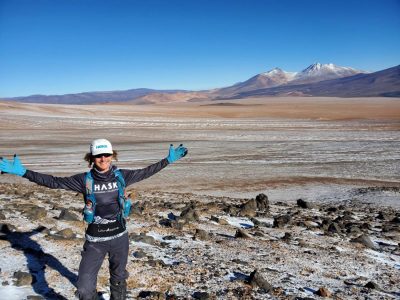 UltrAspire, an outdoor brand driving the hydration and waist lighting category forward, has been refining their athlete program for years. Innovative product development and conceptualizing ideas stem directly from working with members of the team. Entering 2021, UltrAspire works with athletes who hold some of the most prestigious world records to date, and it is these massive endeavors that pave the way to opening new doors in product development

Professional runner Tyler Andrews has been running competitively for over a decade and has found his stride at the marathon and ultra marathon distances. He has competed at two U.S. Olympic Trials and has represented team USA three times. “I love to work with people of this caliber. As a brand we identify with those who want to push the sport itself forward, what are the limits? And how do we help those go beyond them once they’re found.” – UltrAspire CEO & Founder, Bryce Thatcher

Tyler’s most recent endeavor saw him attacking Ojos del Salado Volcano in Chile with hopes of setting the Fastest Known Time (FKT). The route to summit Ojos del Salado measures approximately 33.5 miles (54km) round trip. Beginning at Refugio Claudio Lucero, just off Chilean highway 31, at an altitude of 14,852 ft. and continues to Atacama Camp at 17,224 ft. before reaching the summit at 22,614 ft and returns the same route. Tyler secured the FKT with a time of 9 hours, 29 minutes, and 46 seconds which breaks the existing 2019 record by more than 12 hours. This route features a mix of sandy jeep roads, steep rocky climbs, and technical rock climbing and scrambling near the summit. Additional challenges include high winds, frigid temperatures, and extreme altitude which near the summit contains only 41% of the oxygen at sea level.

UltrAspire is thrilled to welcome Tyler to the team as he continues pushing limits into 2021 and beyond.