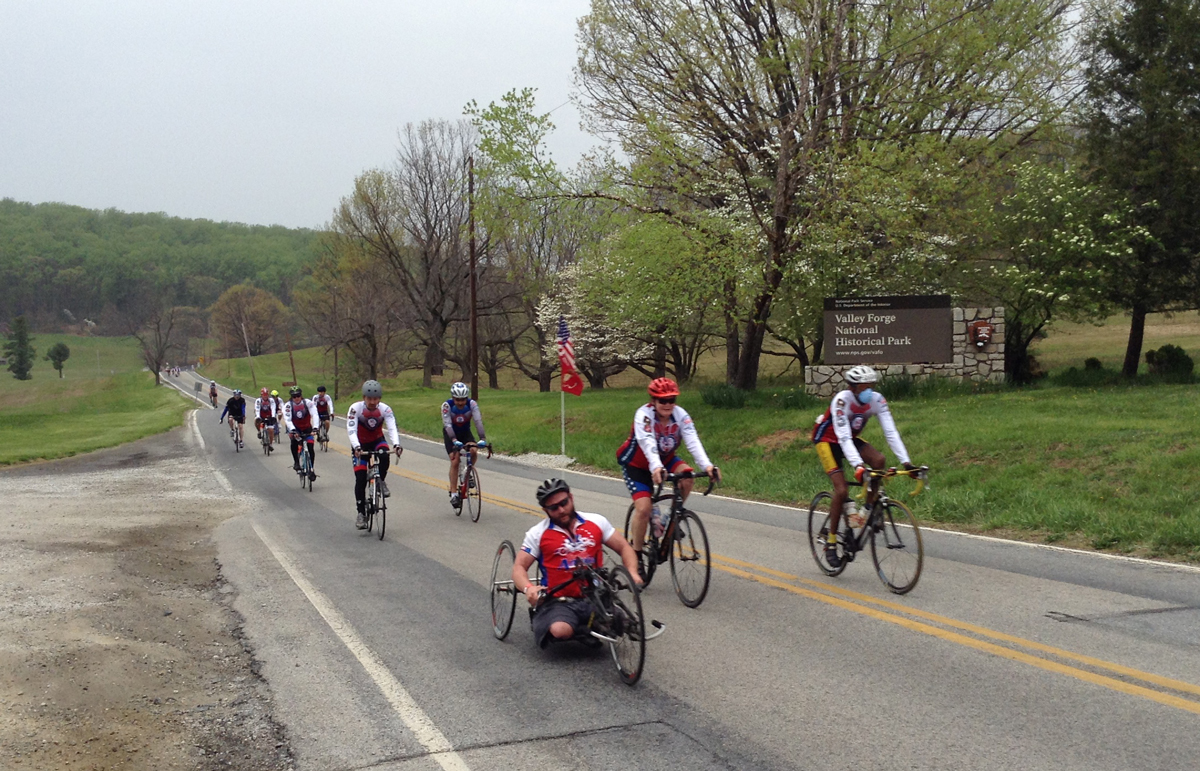 “I have no military service,” said Roznowski. “However, my father, brothers, brother-in-law’s and cousins have all served in the military.” An American Airlines flight attendant who flew with Soldiers and Marines in and out of Kuwait City in 2003, Roznowski founded Operation Comfort in 2004. Her goal was to support wounded, ill and injured service members who served in Iraq and Afghanistan and their families while they recovered at two San Antonio medical centers. Recognizing the benefits of sporting activities for injured military veterans, Operation Comfort began supporting athletes in bicycle rides, sled hockey and equine events.

Learning about Face of America, Roznowski decided to host a team in 2016. She encouraged Operation Comfort athletes to participate and ride with her on the new 120-mile Valley Forge route. This route offered a journey along Pennsylvania’s rural southern border, regions familiar to combatants in both the Revolutionary and Civil Wars.

For the participating Face of America veterans, this connection to past military veterans who helped create today’s nation offered meaning to their own service.

Air Force Trauma Nurse Tammy Heniser saw three deployments in emergency services to Balad, Iraq during the Iraq War. Following her return, she lived with Post-Traumatic Stress from her experiences. Her husband, a retired Navy physical therapist, worked with Operation Comfort, bringing patients to events. He encouraged Heniser to join the organization’s ongoing sporting activities and begin her own recovery. “Sports became a life saver, especially biking,” said Heniser. “I now use biking for stress relief, being able to meet other military members who have been through similar situations, and as a form of pleasure.”

Riding Face of America, she was inspired by the history of Valley Forge and particularly Gettysburg. “I enjoyed learning more about the Civil War and actually seeing where it took place.”

Longer and hillier than the cycling route from the Pentagon, the southern Pennsylvania route challenged riders with steep ascents, particularly on their first day of riding to Lancaster.

“The hills were challenging,” recalled Air Force veteran Shawn Lamm. “We worked as a team to literally push each other up the hills. I remembered pushing the tri-cycles up the hills physically, but mentally, they were pulling me up. There was a special bond I made that’s hard to explain.”

Married and the father of three children, Lamm experienced an episode during his service as a firefighter. He was later diagnosed with bipolar disorder. Now living on medication, he endures the medical side effects to reduce recurring thoughts of death and suicide.

Becoming active in noncompetitive bicycling, Lamm joined events with Operation Comfort’s Team America and Ride 2 Recovery. He encourages veterans to become involved in cycling activities such as Face of America.

“Do hill training and distance training,” Lamm advised. “A lot of it is mentally pushing yourself. Join a group and actively participate in the weekly rides. Align yourself with positive people who push you and challenge you.”

USMC Gunny Sgt. Travis Green agrees that active sports are beneficial to veterans who have become disabled. “Do it. Don’t stop. Don’t quit,” he encouraged.

Serving three overseas tours beginning in 2003, Green worked as a specialist in the Explosive Ordnance Disposal program. During his tours, the father of six traveled to Kuwait, Iraq and Afghanistan. During his 2011 Afghanistan tour, an IED severely injured Green. He lost both legs above his knees. Though he uses prosthetics, Green is active in ju jitsu, hand cycling, sled hockey and rowing. Sports are “great for mental healing,” Green said.

Trained in mechanical engineering, Green designed a prosthetic foot specifically for bilateral above knee amputees. He launched his own company in June, Stump Armour, to manufacture and sell the device. “I’m taking donations so I can give some away for free,” he explained.

For Face of America veterans, the journey to Gettysburg is just a beginning. “I recommend to all who have disabilities of any kind, to become active in some kind of adaptive sports activity because you will enjoy getting out with others, building new relationships and having fun,” said Roznowski. “Good endorphins are created through sports!”

Operation Comfort provides support to our Service Members who have been wounded in Afghanistan or Iraq and are receiving treatment at Brooke Army Medical Center (BAMC) and Audie Murphy VA Hospital in San Antonio, Texas. Wounded Service Members from all over the United States recover in San Antonio.

World T.E.A.M. Sports is a 501(c)(3) not-for-profit organization chartered in North Carolina and headquartered in Holbrook, New York. Since its founding in 1993, World T.E.A.M. Sports has organized athletic events for disabled and able bodied citizens – mountain climbing, white water rafting, biking, and more. Four things always happen at our events: (1) Disabled participants build self-confidence and physical fitness; (2) The disabled provide a role model for other disabled citizens, encouraging them to take up physical activities; (3) The disabled become a moving inspiration to other participants and to spectators when they see that disabled individuals can meet challenges beyond anyone’s imagination; and (4) The disabled and able-bodied participants learn to work as a team to overcome those challenges. World T.E.A.M. Sports changes lives through sports.