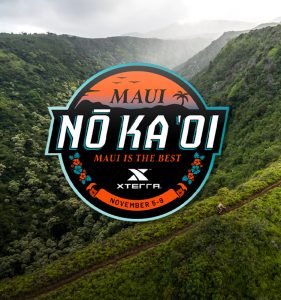 November 6, 2020 (Honolulu, HI) – XTERRA will announce its 2021 XTERRA World Tour schedule and celebrate Maui on what would have been the XTERRA World Championship weekend with an “Aloha Friday” LIVE show on November 6 at 8am Hawaii time (10a PT, 1p ET, 7p CEST) on Facebook.com/XTERRAPlanet.

Hosted by XTERRA MC Chun de Stockel, the broadcast will serve as XTERRA’s official kickoff and countdown to 2021 – its 25th Anniversary season – with special guests, giveaways, performances, and video presentations.

Among the promotions, XTERRA will provide one lucky viewer of the LIVE show an entry into any XTERRA race – triathlon or trail run – anywhere in the world in 2021.

The celebrations also include a variety of XTERRA Maui No Ka Oi VR racing opportunities from a duathlon featuring a 5K run, 30K bike, and 10K run to a Sprint distance Du, and Trail Runs of 5K, 10K, 21K distance or the 5x5K relay team option.  Entry is FREE to all VR events which will be held over five days from November 5-9, and runners can log their times any day over that time frame.

The XTERRA Maui No Ka Oi VR events are a benefit for The Surfrider Foundation/Maui Chapter, which is dedicated to the protection and enjoyment of the world’s ocean, waves and beaches.

Also in XTERRA this week:

XTERRA® is a global lifestyle brand and off-road race series. What started in 1996 as the world’s first off-road triathlon in Maui, Hawaii, is now an endurance sports lifestyle with a racing presence in over 30 countries worldwide and expanding. XTERRA® cultivates a passionate and dedicated community, celebrated by intrepid triathletes, trail runners and outdoor adventurists around the globe.  Learn more at www.xterraplanet.com.

RV Industry Asks for Essential Status Ahead of Potential Lockdown

RV Retailer Expands into Utah with Acquisition of Sierra RV

How COVID-19 Could Actually Be Good for Skiing