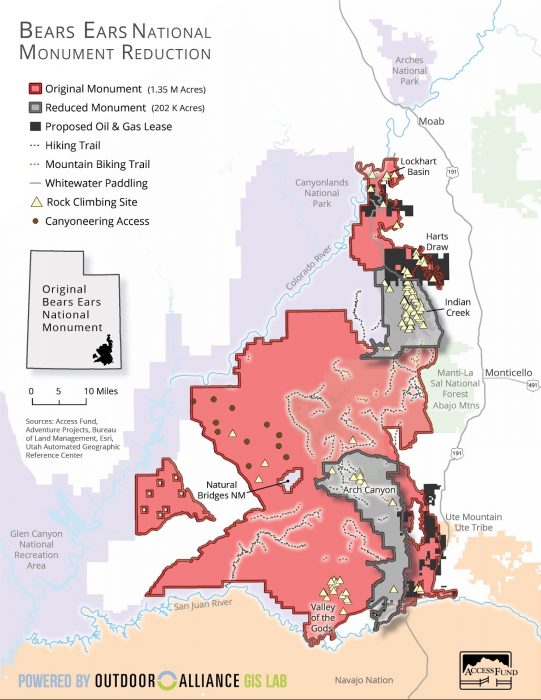 The non-profit climbing advocacy organization will file a lawsuit against the Trump Administration to protect Bears Ears National Monument, home to world-renowned climbing

Before leaving office, President Obama used the Antiquities Act to declare the Bears Ears region of southeast Utah a National Monument, protecting this incredible region. Access Fund worked on this designation alongside the Bears Ears Inter-Tribal Coalition, the previous administration, and other conservation groups, getting “rock climbing” specifically acknowledged as a valuable and appropriate activity. This acknowledgement gave the world-class climbing at Indian Creek, Lockhart Basin, Harts Draw, Arch/Texas Canyon, Comb Ridge, Valley of the Gods, and dozens of other climbing areas an added layer of protection and significance in the national monument.

“Bears Ears was the first National Monument proclamation to specifically acknowledge rock climbing as an appropriate and valued recreation activity,” says Brady Robinson, Access Fund Executive Director. “This was a huge win for the climbing community, as the Bears Ears region is home to a substantial amount of world-class climbing. We cannot afford to lose that acknowledgement or allow the climbing experience to be compromised.”

Under President Trump’s December 4th Presidential Proclamation #9558, rock climbing would also lose its acknowledged status as a valued and appropriate activity, and approximately 40 percent of the climbing areas at Bears Ears would lose enhanced national monument status, including Valley of the Gods, Harts Draw, Lockhart Basin, and a portion of the climbing at Indian Creek. In response, Access Fund named President Donald Trump, Interior Secretary Ryan Zinke, and other administration officials in a lawsuit to defend Bears Ears National Monument on the grounds that President Trump’s Presidential Proclamation #9558 violates both the Antiquities Act and the United States Constitution.

The Antiquities Act gives a president the authority to proclaim a National Monument, but it does not give a president the authority to revoke or modify one. That authority is reserved for Congress alone. The Antiquities Act has protected many iconic climbing areas—including Mt. Rushmore, Joshua Tree (now a national park), Giant Sequoia, and Devils Tower—and the climbing experience in these areas would look very different today without their enhanced status.

“This is a precedent-setting moment,” says Robinson. “This fight is about more than just protecting the incredible climbing at Bears Ears. Nearly 60% of climbing areas are on federal public lands, and this proclamation threatens the Antiquities Act and the very foundation of our public lands system. Bears Ears is a critical battle in the greater fight for America’s public lands.”

A growing movement of law and policy makers are mounting a systematic attack on federal public lands, rolling back environmental regulations, limiting public input on land management plans, and advancing energy extraction at the expense of recreation and other uses and values of public lands. The two much smaller and disconnected monument units that the Trump Administration is attempting to establish appear explicitly designed to optimize oil and gas development opportunities (see map). Much of the area excluded from the original Bears Ears National Monument would be opened up to mineral exploration and oil and gas leasing, including lands abutting the world-class climbing at Indian Creek.

The Trump Administration’s attempt to dismantle the landscape-scale protections and land management strategies for Bears Ears National Monument would also drastically compromise the climbing experience and cultural values of the Bears Ears region. Climbers deeply appreciate the experience of climbing in an undeveloped landscape that affords incredible opportunities to enjoy a unique cultural and historical story.

Access Fund will fight to protect climbing at Bears Ears National Monument, and climbing areas throughout our public lands system. You can learn more about Access Fund and support their work at www.accessfund.org.