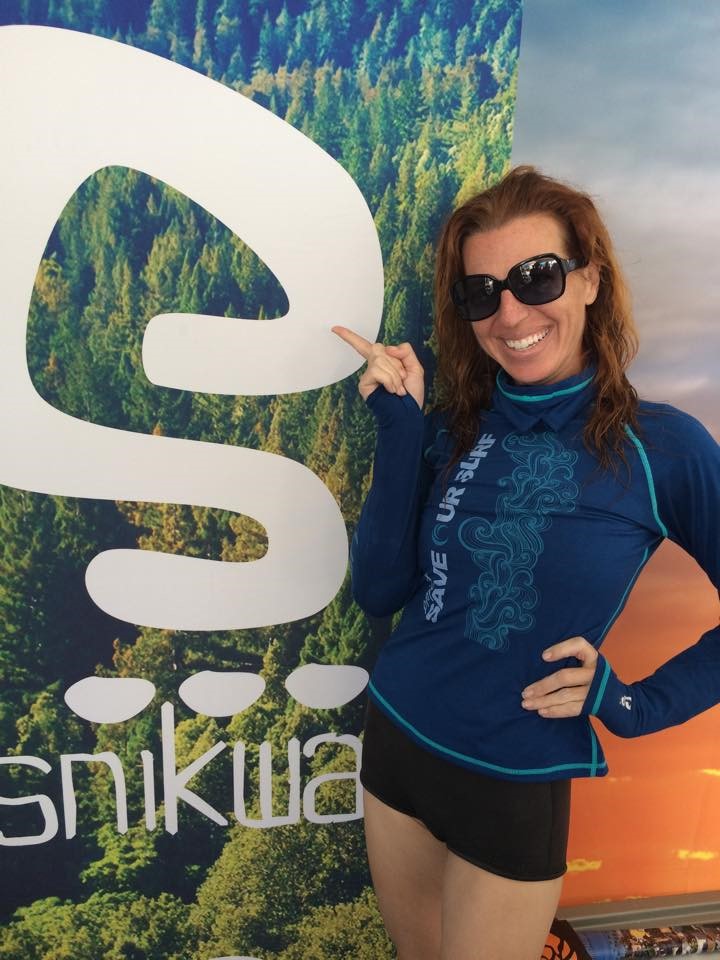 NAPLES, FL, – Snikwah UPF 50+ performance apparel headquartered in Naples, Fla. has inked a deal with Hollywood stage and screen actress Tanna Frederick, who will be representing the company as a brand ambassador.

Frederick, who is also an avid surfer, outdoor enthusiast and philanthropist, was a celebrity surfer for Snikwah at 2015’s Paul Mitchell Supergirl Pro, the world’s largest female surfing competition. Snikwah was the event’s official shirt and apparel provider. A portion of proceeds from Snikwah shirt sales were donated to Project Save Our Surf, a charity founded by Frederick which is dedicated to the conservation of ocean and marine ecosystems.

“Tanna was a perfect choice for a brand ambassador. She is a talented, driven and free-spirited young woman. Her athleticism as a runner, a second-degree Tae Kwon Do black belt and as a passionate surfer exemplifies the Snikwah lifestyle making her ideal to represent our brand,” Snikwah CEO Roy Smith said.

As an ambassador, Frederick will serve as a company spokeswoman promoting Snikwah UPF 50+ performance apparel and the conservation of the oceans and waterway ways we all love and share.

The Snikwah Original shirt helps to regulate body temperature with Drirelease®, a fabric with wicking ability that keeps you cooler in hotter temperatures and warmer in cooler temperatures.

“The Original features a patented, convertible neck and allows the wearer to control the level of protection exactly where they need it. It can be worn down, with the neck extended to cover your mouth or as a full buff or hood. The company also features a line of rashguards called Hydros that regulate the wearer’s body temperature whether they are in tropical surf or in colder waters,” Smith said.

“I am so excited to be a part of this company. Snikwah has the BEST clothing not just for surfers but for all outdoor activists. The wicking of the fabric in their Originals and rashguards helps to keep you comfortable whether you are running a half marathon through the redwoods or surfing in the ocean. The style, fit, and design are beyond compare,” Frederick said.

“It is a pleasure to represent a brand that gives back to kids. Snikwah’s involvement in Project Save Our Surf will help send thousands of kids who can’t afford it to camp. They are a company with heart and soul,” Frederick said.

In addition to Frederick’s participation as a Snikwah ambassador, you can see her this spring in Henry Jaglom’s romantic mystery “Ovation” starring opposite James Denton. Frederick will also be producing and starring in the virtual reality series “Defrost” which will be screening at Sundance’s New Frontier program.

Frederick is a mainstay of the Los Angeles Theatre community. In 2013, she won the LA Stage and Eddon awards for Best Actress for N. Richard Nash’s “The Rainmaker’ at the Edgemar Theatre.

Snikwah is a performance clothing line based in Naples, Florida formed in 2010. The creators wanted active wear that allowed them to do everything they do, only better. Just like the people who wear it, there is nothing else quite like Snikwah. The Snikwah line of performance shirts feature a patented, convertible neck with full head and upper body coverage. Snikwah’s are made with a proprietary blend of Drirelease that is unmatched in its performance.  This fabric wicks moisture away and keeps you dry, keeping you cool in the heat of the burning sun with a UPF 50+ rating for maximum sun protection. Snikwah’s special blend of Drirelease is so advanced it not only keeps you cool in the summer, but Snikwah will also keep you warm when temperatures dip. These high performance shirts are developed for all outdoor activities including fishing, boating, skateboarding, surfing, motorcycling, hiking, running, kayaking and working or playing outdoors. Snikwah is the most comfortable, versatile, and all around protective piece of performance apparel on the market today. www.snikwah.com

View all Releases by Tom