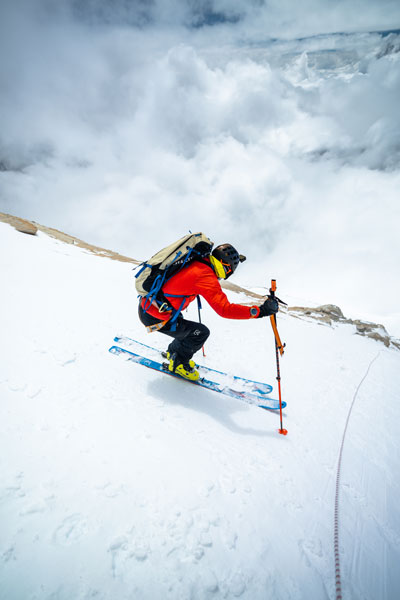 Auburn, NH /OUTDOOR SPORTSWIRE/ – Fischer Skis US announces that Adrian Ballinger, IFMGA-certified guide and professional ski-mountaineer, will be joining athlete ranks starting with the 2022/23 season. Ballinger has made a name for himself summiting the world’s tallest mountains, seventeen 8000-meter peaks to be precise, and has tallied ski descents on a few of these behemoths, his most notable achievement being the first ski descent from the summit on Manaslu, Earth’s 8th tallest peak.

For Fischer, bringing on an athlete and guide of Ballinger’s caliber is exciting not just because of the athletic talent he brings, but also because of his unique perspective on Fischer’s product lineup when testing skis and boots on-piste and in the high mountains.

Ballinger explains, “The boots and skis that Fischer has developed the past couple of seasons for backcountry and freeride really excite me. Towards the end of last season I began testing out Rangers inbounds, and the Trans Alp Pro boot and Hannibal ski backcountry and was so impressed by the downhill performance of both lines. The boot especially impressed me—it climbs so well and is so lightweight, yet totally rips on the downhill.” For him, the link between the quality of the products and Fischer’s dedication to their athlete community and the input they provide is key. “I spent last February skiing in Switzerland, mostly in Andermatt and Engleberg, and really enjoyed the dedication of the Fischer backcountry and freeride community there. So many great skiers were pushing hard on Fischer. It’s exciting to be a part of.”

Ballinger doesn’t just log ski descents and summits for himself, however. As the founder and owner of Alpenglow Expeditions, his company guides over 6000 people a year on peaks around the world.

“In 2004 I decided I wanted to professionalize my guiding, start my own guiding company (Alpenglow Expeditions), and start spending more time ski guiding in the Alps,” Ballinger notes of how he got his start in the guiding world. “Those three goals led me to begin the AMGA process. Since I already had almost a decade of varied guiding experience my certification process went quickly. I became a full-cert IFMGA guide in 2007.”

Fischer has been a partner of the American Mountain Guiding Association since 2017, and looks forward to deepening the relationship with the AMGA through the support of Ballinger.

“We’re excited to have Adrian join the Fischer team,” says Brian Landrigan, Marketing Director for Fischer Sports US. “He is an accomplished mountaineer and skier whose abilities match perfectly with the new Ranger and Transalp product lines. His IFMGA certification and deep connection with the AMGA community match perfectly with Fischer’s long-standing support of certified guides specialized in backcountry skiing, ski mountaineering, and more.”

Fischer’s vision is to be the winter athlete’s brand of choice through outstanding products, created for everlasting moments and new levels of individual performance. The privately held company employs nearly 2000 individuals who all share a passion for and dedication to winter sports. Fischer Sports GmbH was founded in 1924 in Ried im Innkreis, Austria, where the global headquarters is still located. Manufacturing takes place there and in Ukraine. For more information, visit www.fischersports.com