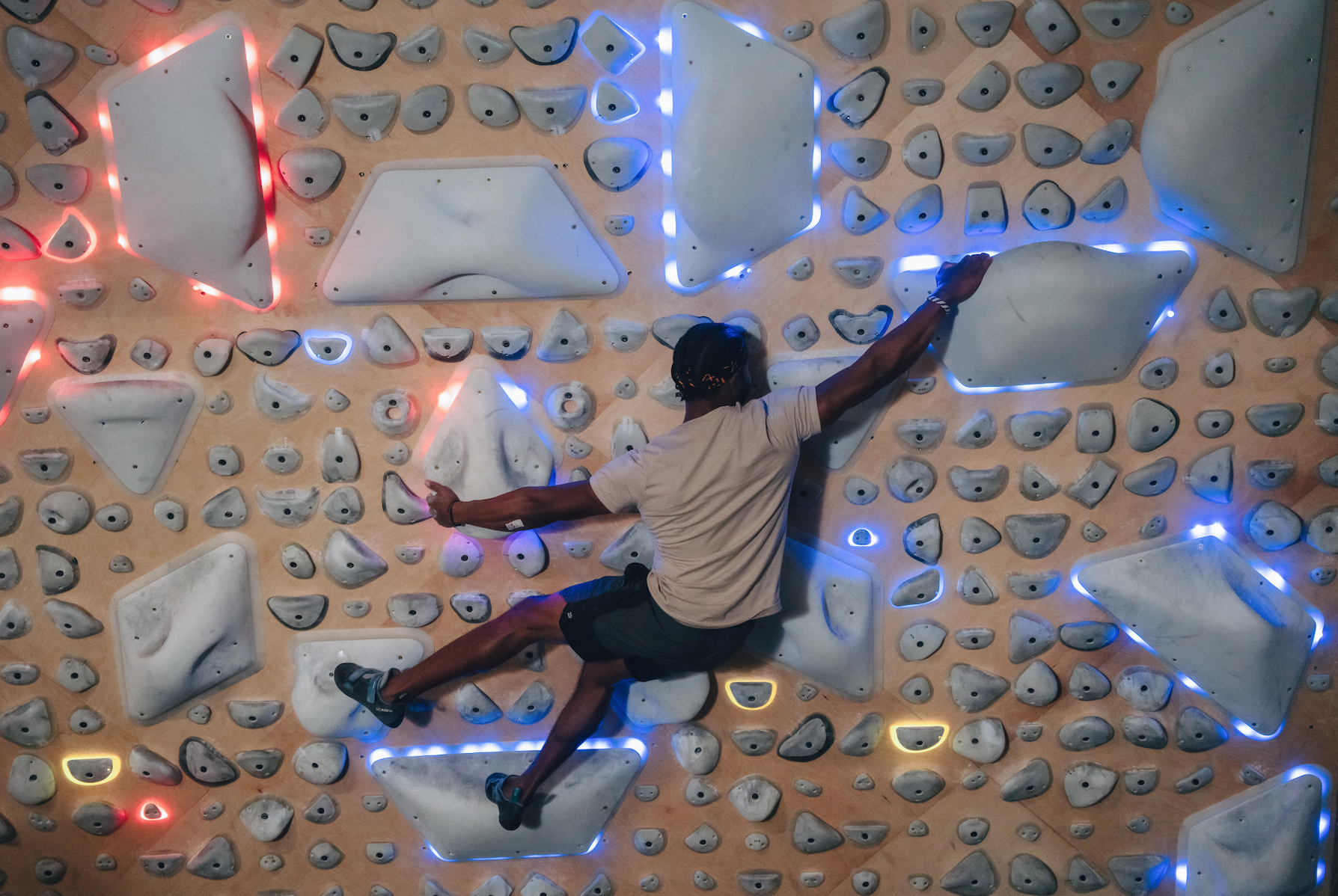 BROOKLYN, N.Y. (October 20, 2021) /OUTDOOR SPORTSWIRE/ – Arcade Climbing, an immersive technology company, today introduced proprietary technology transforming the sport of climbing for newcomers as well as core devotees. Specifically, the interactive climbing holds and technology, a first for the indoor climbing industry, respond and react to force with colored LEDs guiding climbers through an expanding library of routes. Arcade technology is currently installed in Brooklyn Boulders climbing gyms at their West Loop (Chicago) and Eckington (Wash. D.C.) locations. The company plans to expand rapidly across the U.S. over the next year.

Arcade’s responsive climbing holds dynamically react to force with sensors and, when held, provide guidance as to the climber’s next move by lighting up holds. The climbing holds and wall are wired with LED lights and force sensors. The wall is connected to a tablet through a mobile app developed to control and manage the proprietary smart wall. Using Bluetooth, the iPad is linked to the climbing wall and from there users can select climbs and activate them onto the wall.

“The goal is to invigorate the sport of climbing through reimagined technology and a strong sense of community,” said Martin Adler, CEO of Arcade Climbing. “Arcade Climbing is bringing a fresh, vibrant energy to indoor climbing gyms nationwide, making the sport fun and inclusive for newcomers while presenting new challenges and training programs for avid gym-goers.”

For consumers new to the sport of indoor climbing, the technology provides guided programs and games for learning the basics. For expert climbers, there is a library of advanced challenges and climbing series developed by professionals to complement training programs.

To use the technology, the user accesses an extensive library of climbs and activities set by professional route setters and trainers via an iPad controller. They choose what they would like to try, whether it’s a beginner instructional program or an advanced training regime, then press climb on the screen triggering the holds to illuminate their path.

“Arcade improves your mental game as you move in response to the lights,” said Jen Saito, an avid climber who lives in Chicago. This technology dramatically widens the number of problems at your fingertips. Plus, you can tailor your experience and train in a targeted way,”

Arcade Climbing expects to extend its next line of climbing technology to climbing walls all over the world including offices, hotels, and schools, among other entities introducing indoor climbing as part of its fitness offerings.

Arcade Climbing is an immersive technology company developing next generation experiences that open up a new world for climbers of all levels to move, play, and train. Arcade Climbing was formed by a team of experienced technologists, climbing gym operators and climbers. Its first technology is proprietary responsive climbing technology that reacts to climbers’ movements, creating endless interactive problems, circuits, games, self-guided training, and partner climbs. For more information: www.arcadeclimbing.com.