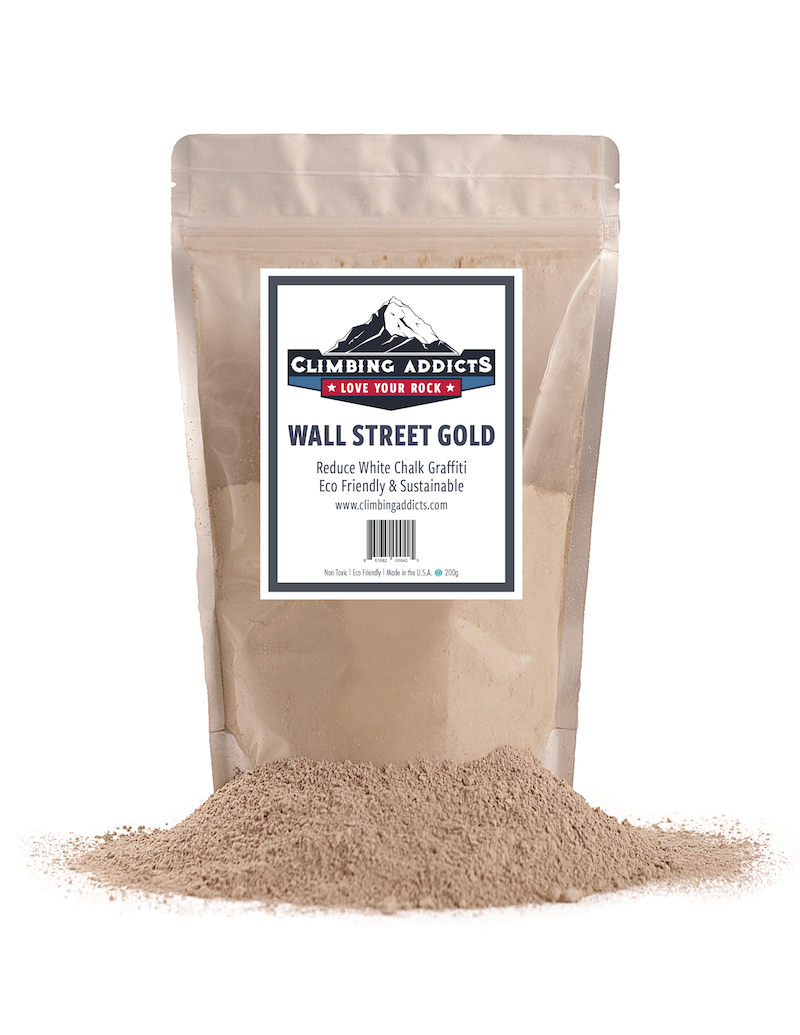 Wall Street Gold and Yosemite Gray Blends In With The Environment

Lafayette, Colo. (October 23, 2017) – Climbing Addicts, a family run rock climbing gear company based in the Colorado Rockies, announces the introduction of colored climbing chalk. In an effort to reduce the visual footprint that rock climbers leave on the rocks and trails that they call home, the Climbing Addicts chalk is tinted in two colors options that blend in with the natural landscape found across the U.S. – Wall Street Gold and Yosemite Gray.  The colored climbing chalk is sold in 200g bags and retails for $15.99.

“As rock climbing becomes more and more popular, colored chalk is a solution to a growing problem.  Approaching a route, you can’t help but notice the ever growing number of white chalk marks blemishing the rock face,” says Shawn Axelrod, Founder of Climbing Addicts. “As stewards of our environment, we are responsible for making the cliffs enjoyable for not just other rock climbers but also the hikers and backpackers that enjoy the mountain scenery.”

The Climbing Addicts’ colored climbing chalk is a result of nearly a year of research, experimentation and product testing on rock faces across the U.S. A dry process is used to tint the magnesium carbonate, as opposed to a chemical process, and the result is a colored chalk that blends in with the environment and feels and performs just like other high quality white chalk. The pigment ratio is small and does not alter the chalk in any way, give the chalk a “slimy” feel or stain the hands.  The colored climbing chalk is made in Colorado.

“White chalk is not just an aesthetic issue, it also takes a bit of the adventure out of climbing,” continued Axelrod. “White chalk marks show where previous climbers have taken their route and makes it all too easy to just follow the path most traveled. Colored climbing chalk blends in with the landscape and will make climbers feel as if they are the first to ascend a crag or crack.”

The company is also looking to expand its team of professional rock climbing athletes. Rock climbers with a strong social media following can contact the founder of Climbing Addicts, Shawn Axelrod at shawn@climbingaddicts.com.

Climbing Addicts is a family run startup business based in Lafayette, Colorado.  Founded by Shawn Axelrod and his two sons in 2017, the company designs and manufactures high quality rock climbing gear. The company demonstrates its strong commitment to the environment not only through its products, but also through its partnership with 1% For the Planet. The company’s flagship product, colored climbing chalk is sold in dozens of retail stores across eight states and is available online through Amazon and the company website, www.climbingaddicts.com.

View all Releases by Katy Gaenicke