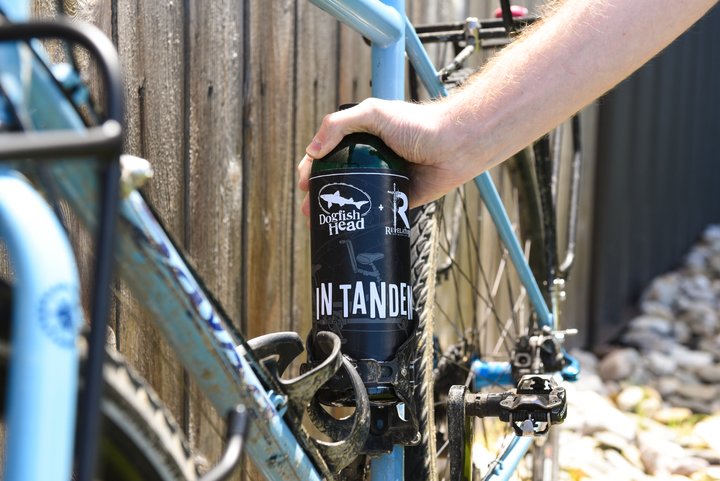 Milton, Del., June 20 – In honor of all things independent, Dogfish Head Craft Brewery and Revelation Craft Brewing Company are joining forces to brew two iterations of In Tandem, a special, draft-only Independence Day collaboration for release on Thursday, July 4. A summer-centric Hefeweizen, In Tandem will be brewed with Sussex County malt, wheat and strawberries. To put their own unique twists to this warm weather quencher, Dogfish Head and Revelation will each add different complementary ingredients to their versions of the brew. Each brewery will offer its iteration of In Tandem on draft and in custom browlers at its respective Rehoboth location, Dogfish Head Brewings & Eats (320 Rehoboth Avenue) and Revelation Taproom (19841 Central Street). Funds from the sales of In Tandem will benefit the Rt. 9 Trailhead planned by the Sussex County Land Trust, an area that will mark the halfway point between Dogfish Head’s Milton brewery and Revelation’s Georgetown facility on the Delaware Rails-to-Trails bike path.

“There’s nothing I love more than collaborating with other independent craft brewers to create a delicious beer, or in this case, beers,” said Sam Calagione, founder of Dogfish Head. “A liquid tribute to all things independent – independent brewers and breweries, independent businesses, and coastal Delaware’s ability to be independent from motorized vehicles to visit the area’s many wonders – there is no better day to share In Tandem with local craft beer lovers than on the anniversary of our country’s independence. Both Dogfish Head and Revelation are proud supporters of the Brewer’s Association seal for independent craft beer, which you’ll find on both of our beer packages and the In Tandem browlers.”

To encourage folks to ‘support local,’ and bike to both Dogfish Head and Revelation’s Rehoboth locations on Independence Day, each brewery will serve its respective version of In Tandem. Both beers will be brewed from locally-grown barley and wheat donated by Proximity Malt in Laurel, and feature local strawberries as the main ingredient. In fact, Calagione and Revelation founder Patrick Staggs hopped on a tandem bike and rode to Magee Farms in Lewes to pick the strawberries themselves. Dogfish Head’s version of In Tandem will also include the addition of nutmeg fruit to offer slightly sweet and nutty notes, and Revelation’s version will contain vanilla and locally-harvested lavender from Lavender Fields in Milton for fragrant floral aromas and flavors.

“Collaborations are really fun for the brewers, as we get to break away from all of the demands that come with running a brewery and just geek out to craft something totally new,” said Staggs. “For small craft brewers, our independence is an important component of our interdependence on each other to stay successful in our path for growth. Just like pedaling on a tandem bike, if each of us individually gives the effort to fulfill our role, then together we will reach our destination quicker. And now with Revelation and Dogfish locations up and down the bike trail, there are plenty of great destinations for our guests … so get out there on two wheels!”

Dogfish Head Brewings & Eats and Revelation’s Rehoboth taproom will open at 10 a.m. on Thursday, July 4, for the debut of In Tandem. To rejoice in this freedom-filled beer, each location will kick off the day with the release of 200 (32oz) In Tandem-filled browlers*. These limited-edition, plastic, water bottle-shaped growlers fit perfectly into almost any bicycle’s drink holder. All profits from browler sales, as well as $1 from every glass of In Tandem sold, will be donated to the Sussex County Land Trust.

*Browlers available only with purchase of In Tandem, while supplies last.

Dogfish Head has proudly been focused on brewing beers with culinary ingredients outside the Reinheitsgebot since the day it opened as the smallest American craft brewery 24 years ago. Dogfish Head has grown into a top-20 craft brewery and has won numerous awards throughout the years including Wine Enthusiast’s 2015 Brewery of the Year and the James Beard Foundation Award for 2017 Outstanding Wine, Spirits, or Beer Professional. It is a 350+ coworker company based in Delaware with Dogfish Head Brewings & Eats, an off-centered brewpub and distillery, Chesapeake & Maine, a geographically enamored seafood restaurant, Dogfish Inn, a beer-themed inn on the harbor and Dogfish Head Craft Brewery a production brewery and distillery featuring The Tasting Room & Kitchen. Dogfish Head supports the Independent Craft Brewing Seal, the definitive icon for American craft breweries to identify themselves to be independently-owned and carries the torch of transparency, brewing innovation and the freedom of choice originally forged by brewing community pioneers. Dogfish Head currently sells beer in 44 states and Washington D.C. For more information, visit www.dogfish.com, Facebook: @dogfishheadbeer, Twitter: @dogfishbeer, and Instagram: dogfishhead.

Revelation Craft Brewing Company believes through the fundamentals of people, process and quality, the boundaries in the craft of brewing are limitless. Since opening company doors on July 1, 2016 in Rehoboth Beach, Delaware, Revelation beers have won various prestigious beer awards. These include a silver medal from the 2018 World Beer Cup for Peach Berliner Weisse, bronze medal from The Great American Beer Festival for Co-Conspirator Apricot Sour (Gluten Free), medaling at several other beer competitions, such as The United States Beer Tasting Championship in 2017, Denver International Beer Competition in 2017 and 2018, U.S. Open Beer Championship. Voted Best of Delaware 2018 Bike Stop- editor’s choice, the Rehoboth location is situated directly on the Junction and Breakwater Bike Trail making it an oasis for cyclists. During the summer months, Revelation Craft Brewing Company hosts beer gardens throughout the state of Delaware, Revelation Whitehall Beer Garden proceeds benefiting Kays Foundation and Revelation Hudson Fields Beer Garden proceeds benefiting BeeBe Medical Foundation. A Revelation Georgetown, Delaware location is anticipated to open end of summer 2019. Revelation Craft Brewing Company is an avid supporter of the Independent Craft Brewing Seal and distributes beer throughout the state of Delaware as well as cans and beer to go from the brewery. For more information, visit Revbeer.com, Facebook: @revbeer, and Instagram: @revbeer.