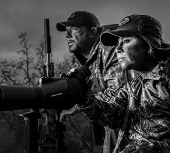 WHITEFISH, Mont. (July 27, 2021) — FORLOH, the 100% made-in-America technical outdoor brand, welcomes Jon and Gina Brunson to the brand’s growing roster of professional and amateur personalities who share their passions for hunting, fishing and outdoor pursuits. Most well-known for their award-winning TV series, Addicted to the Outdoors, which recently premiered its 14th season on the Outdoor Channel, Jon and Gina share their love for outdoor adventures while balancing work and raising six kids with viewers across the country.

In addition, FORLOH will also be sponsoring their latest adventure, Spear Life, an unscripted documentary series following Jon and friends as they travel the globe snagging fish big enough to be on any spear fisher’s bucket list.

“Anyone who’s watched us knows that we aren’t ones to rest on our laurels and do the same ol’, same ol’. We’re always looking for what’s new, what’s next and how hunting and fishing is evolving. And that’s why we’re excited to be partnering with FORLOH and bringing ‘the future of hunting’ to the masses,” explains Jon.

With some of the network’s highest audience numbers, Addicted to the Outdoors– and now Spear Life– both air on Outdoor Channel and episodes can also be viewed online. The shows showcase the Brunsons’ passion for the outdoors, whether on the water or in the field, whether solo, as a couple or as a family.

“After 17 years on TV, we have found the right mix of science, research and development, and good ole American ingenuity, all wrapped up in a great patriotic American company called FORLOH,” adds Gina.