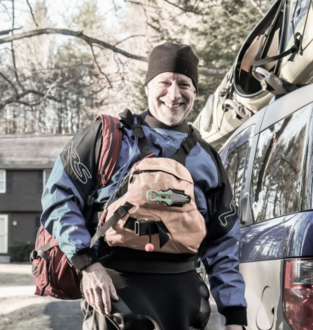 “We’re thrilled to be supporting a Maine-based adventurer of John’s caliber,” said CEO Mike St. Pierre. “The Northeast is filled with the mountains, forests, trails and rivers that initially formed our passion for the outdoors. It’s critical to us that we design and build our gear here, and also that our most prominent local adventurers use it here.”

Connelly’s 75-day trip starts on April 16, and will take him through two countries and four states and over 22 streams and 58 lakes. The journey will be the first to link four major waterways: The Northern Forest Canoe Trail, Saint John River, Bay of Fundy and Maine Island Trail.

“I’m making this trip for anyone who’s ever stared into the night sky and yearned for a deeper connection to the world beyond ourselves,” says Connelly. “The planetary powers that are so evident in nature are the birthright of us all. I’m honored to participate in a venture that seeks to celebrate them with others who might be motivated to enjoy and protect them as well.”

Connelly will be providing regular video and text updates on his trip at paddlequest1500.com. For more information, please contact Lizzy Scully at lizzy@hyperlitemountaingear.com.