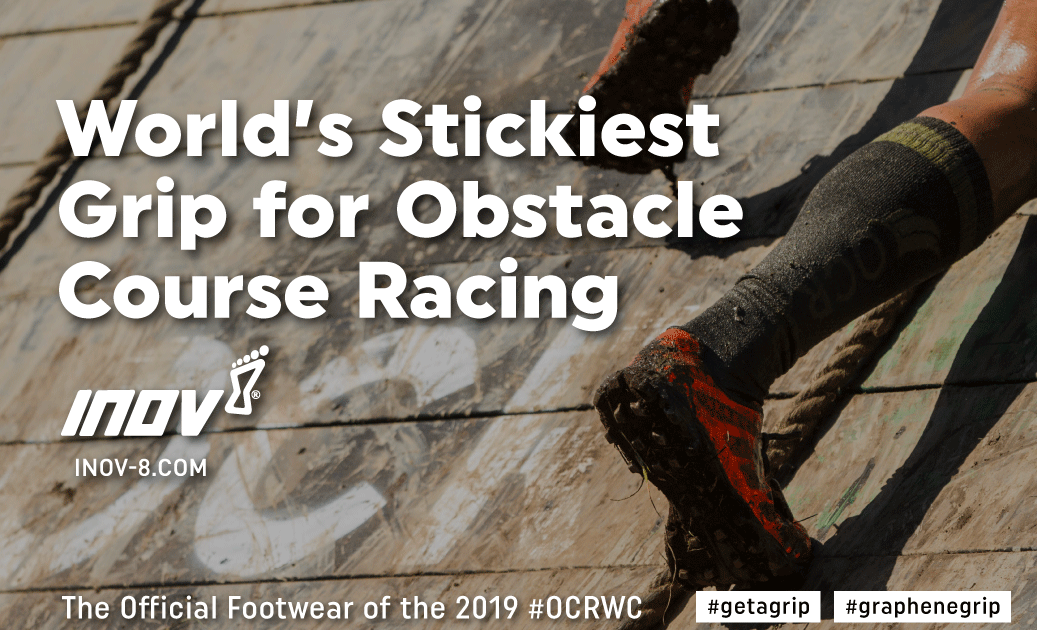 Second year running for the UK-based brand, but this year’s event returns to their back yard

The Obstacle Course Racing World Championships are returning to the UK, and inov-8 will once again be the official footwear brand. The renowned, Britain-based footwear brand will keep the title for second year running, after last year’s US event.

The 2019 OCRWC will be held just outside London on October 10-13 and will see more than 5,000 of the world’s best obstacle course racers battle it out over muddy terrain and the sport’s toughest obstacles.

In addition to the 3k, 15k, Team and Charity competitions, the 2019 event will also debut the much-anticipated 100-Meter Sprint Championships.

Award-winning sports brand inov-8, whose legendary grip and toughness has helped it become synonymous with the sport for more than a decade.

“We are proud to once again be the official footwear brand of the OCR World Championships, especially back here on home soil. 2018 was a fantastic experience for us, and we can’t wait to return this year,” said Michael Price, inov-8 Product & Marketing Director.

“Obstacle Course Racing is a sport on the rise and attracts racers of all abilities. The World Championships are, of course, the pinnacle of the sport, where the toughest come to compete. In the 2018 Worlds, eight of the top 10 male athletes wore inov-8 shoes, and we’re well-placed to have similar results this year. One thing’s for sure: We will bring the world’s toughest grip to the party!”

Inaugurally staged in 2014, last year saw the championships held outside North America for the first time in its history, with racers from 65 countries taking part. Such was the success of the 2018 championships staged in Brentwood, Essex, that it will return there for 2019.

Sandra Sawyer, Partnerships Director for Adventurey, who created the event, said: “Conquering the technical obstacles at the OCRWC takes more than mental and physical strength. It also requires multifunctional footwear that can easily grip and glide over wet, muddy and slippery surfaces while keeping feet protected and secure.

“It’s a true testament to inov-8’s revolutionary and superior lightweight, breathable and gripping footwear that we are teaming up with this industry icon again for the 2019 championships. Our athletes deserve the best so that they can conquer the course and compete at a global level,” says Sawyer.

Founded in 2003 and based in the UK’s Lake District fells and mountains, inov-8 has been delivering the best grip in extreme sporting conditions for 15 years, working closely with athletes who push their limits in running, CrossFit and obstacle course racing. In 2018, the brand became the first in the world to use graphene – the planet’s strongest material – in sports footwear, making their rubber outsoles 50% harder wearing, 50% more elastic and 50% stronger.

Since its inception in 2014, the OCR World Championships has served as the premier independent global championships for the sport of obstacle course racing. The 2018 event drew athletes from more than 65 nations and was widely regarded as the most diverse and expansive race in OCR history. Created by Adventurey, the event requires athletes to earn a limited number of spots through a network of qualifying events. https://ocrworldchampionships.com

Founded in Northern England in 2003, inov-8 is one of the world’s leading footwear, apparel and equipment brands in the off-road running and fitness sectors. Now operating in over 60 countries, inov-8 prides itself on designing high-quality, innovative products that deliver the best in grip and performance. www.inov-8.com