James Niehues, The Man Behind the Maps, Nominated to U.S. Ski and Snowboard Hall of Fame 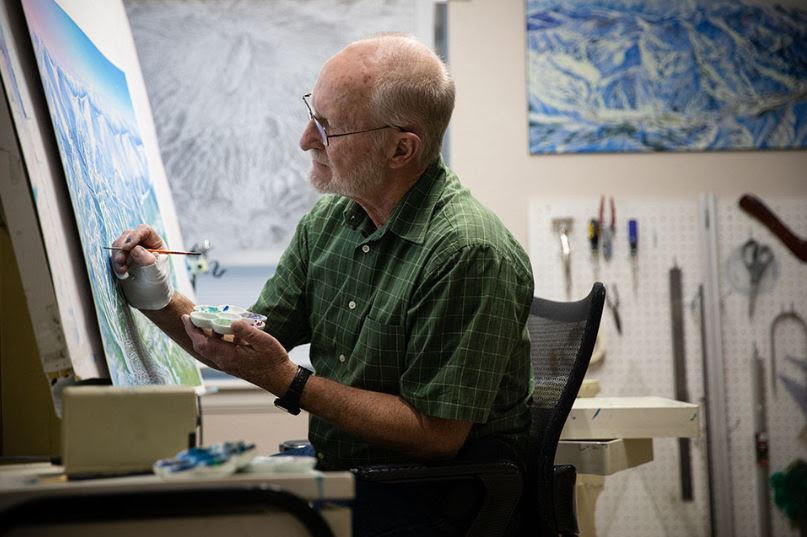 Denver (August 8, 2019) – James Niehues, the artist behind more than 300 ski resort trail maps worldwide, is among 15 candidates nominated this year for the U.S. Ski and Snowboard Hall of Fame. This prestigious honor highlighting his lifetime achievements and global impact upon the ski and snowboard industry comes on the heels of a new book detailing Niehues’ trail map art and one-of-a-kind career, with early sales already setting records before his book is available this fall.

“I’m truly honored and humbled that the U.S. Ski and Snowboard Hall of Fame recognizes my passion for what I do and appreciates the fact that my work is so unique,” Niehues said. “I had no idea that I could make that much of an impression on an entire industry. This whole thing, the nomination and the recent book, it’s just hard to put my gratitude into words.”

Niehues was born on a farm in Loma, Colorado and never aspired for recognition. But he did dream of becoming an artist. Over a more than 30-year career, he has hand-painted trail maps for iconic resorts around the globe, spending countless hours painstakingly adjusting perspectives and details to craft both useful guides as well as works of art.

He is among five candidates in the hall’s “snowsports builders” category, which elevates men and women whose work has “had a clear national impact” and are “widely known for their work.” The 2019 class of snowsports builders includes Benjamin Finely and Arthur Clay, the founders of the National Brotherhood of Skiers, the 44-year-old umbrella group for more than 50 African American ski clubs; Gwen Allard, a visionary in the world of adaptive skiing; Howard Peterson, the long-time leader of the U.S. Ski Association; and pioneering ski movie maker Greg Stump.

Supporters of Niehues’ nomination include Telluride ski resort owner and chief executive Bill Jensen, who said: “Jim is an iconic part of skiing, from the way we use his maps to his signature in the bottom corner. I mean, how many trail maps of his have been printed? Hundreds of millions? What other artist can say that?”

The final voting process involves over 400 industry advocates and takes place in August with the new class being announced mid to late September. The U.S. Ski and Snowboard Hall of Fame inducts nominees each year across three areas including Athletes, Builders and Heritage categories.

To learn more about James Niehues’ story, or to pre-order his new book The Man Behind The Maps that showcases a visually inspiring collection of his artistic trail maps, visit jamesniehues.com.