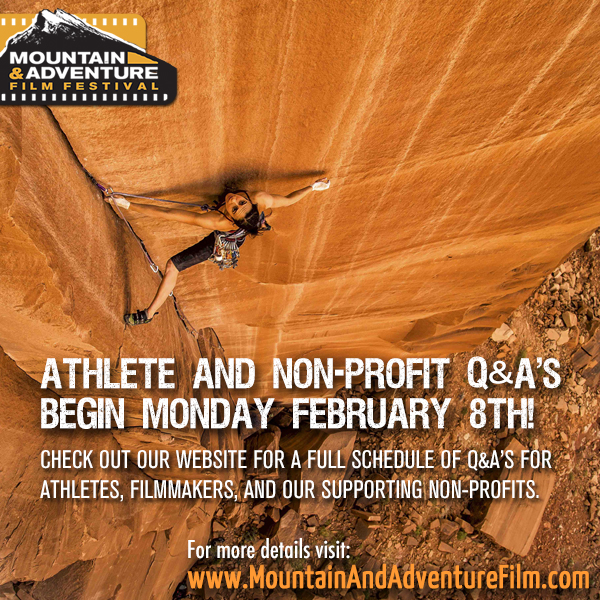 These talented individuals are not only some of the best athletes in the world in their respective disciplines, but they are people to whom children, enthusiasts, brands, and the general public can admire and emulate. Their pursuits are inspiring, their commitment to excellence is admirable, and the medium of video makes it possible to share their lives, experiences, and adventures with the greater outdoor community. Click for a small video sampling of their awe-inspiring talent.

During the festival, members of the Athlete Ambassador Council will engage with interactive Q&A’s on Facebook, Twitter, and Google Hangouts. Visit the website for a complete schedule of events. Throughout the year, the festival will work to provide meaningful content in collaboration with each member of the team.

“I’m very excited to be supporting these athletes’ adventures and work” says Film Festival Flix CEO, Benjamin Oberman. We want to develop and amplify their voice, helping their stories and films reach a wider audience. This includes collaborating with existing OIA brands, filmmakers, and distributors with whom they work, but also taking a Production role for certain stories that are screaming to be told. With the company’s roots in the distribution of International, Art & Independent Film, Film Festival Flix is uniquely positioned to find, assist, or create films that can reach a wider audience and apply our experience and resources to connect the two. These athletes are at the center of it all!

Click to hear why these athletes joined the Athlete Ambassador Council.

Check out the complete team and their profile pages on Film Festival Flix.