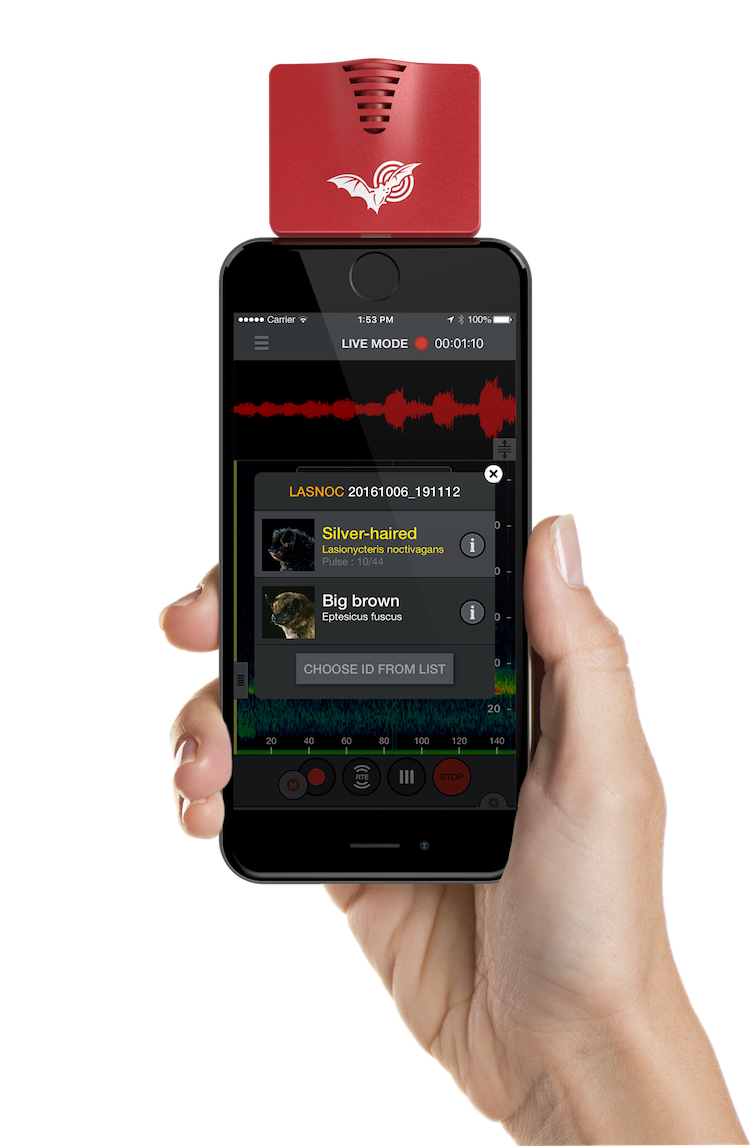 BOSTON, MASS – The new Echo Meter Touch 2 and Echo Meter Touch 2 Pro plug-in modules, for iPhone and iPad, allow users to listen to, record, and identify a wide variety of bats by their ultrasonic echolocation calls.  Previously only possible through the use of expensive scientific equipment, Echo Meter Touch gives outdoor enthusiasts, citizen scientists, and researchers an affordable and informative way to interact with these important creatures.

The modules are available for pre-order at www.wildlifeacoustics.com and will ship to customers in early June.

The modules, which connect via the Apple Lightening connector, listen for and record bat ultrasonic calls and displays them on a highly configurable, full-color spectrogram in real-time. The app automatically reveals the most likely bat species for each recording and tags the file with the recording location. Recordings can be easily shared with other bat enthusiasts or transferred to any computer for additional analysis.

Along with the new modules, Wildlife Acoustics has updated the Echo Meter Touch iOS app. The new app has the same spectrogram and likely species identification features as the original, but now includes beautiful bat images by esteemed bat expert and photographer Merlin Tuttle, author of The Secret Lives of Bats, My Adventures with the World’s Most Misunderstood Mammals, who founded Bat Conservation International and currently leads Merlin Tuttle’s Bat Conservation.

“Tuttle’s images give bats a dignified face,” added Snyder. “Seeing those portraits on the screen while a bat flies overhead really makes you feel connected to these magnificent creatures.”

Bats have long been misunderstood and demonized all the while playing a crucial role in our ecosystems by controlling insect populations and pollinating flowers.  A 2011 study estimated that bats have an economic impact of about $3.7 billion a year in reduced crop damage and pesticide use in the United States.

Over the past decade, the populations of several species of bats have been decimated by white-nose syndrome (WNS). The syndrome is named for the white fungus, Pseudogymnoascus destructans, that infects the skin of the muzzle, ears, and wings of hibernating bats.  Since the winter of 2008 it has killed untold millions of bats.  WNS has been confirmed in 31 states and five Canadian provinces from Rhode Island to Washington State.

“We’ve seen bat numbers decline by almost 80 percent in the Northeast due to WNS, so every time I hear an affected species on my Echo Meter Touch, I’m encouraged that the bats that managed to survive are beginning to rebuild their populations,” added Snyder.