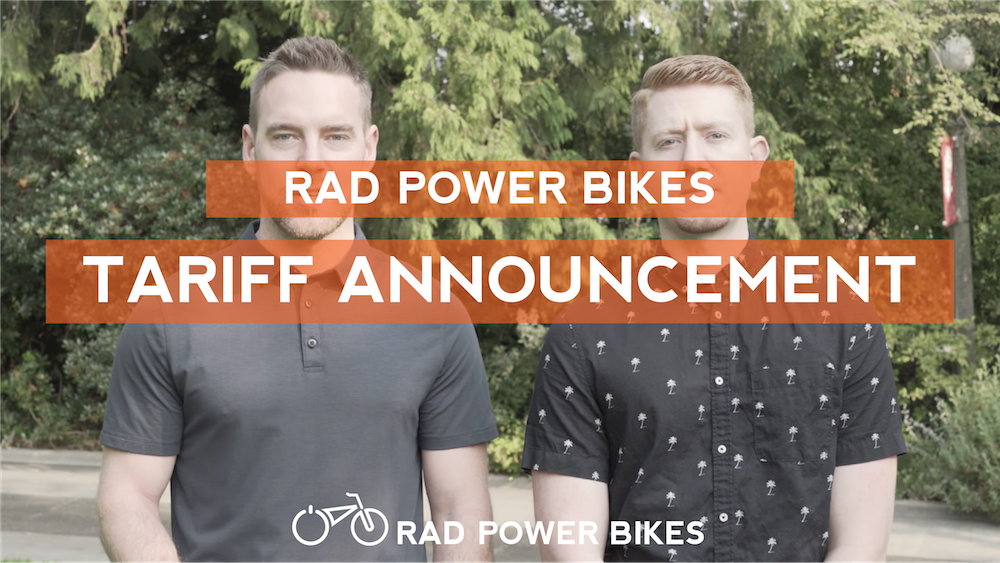 SEATTLE, Wash. – As part of the ongoing trade negotiations between the U.S. and China, a 25% tariff is going to hit nearly every U.S. electric bike company and threaten the future of sustainable transportation. Rad Power Bikes, a Seattle-based direct to consumer ebike brand, addresses the situation in a new video released on their website by their Co-Founders Mike Radenbaugh and Ty Collins.

“The electric bike movement is skyrocketing in the U.S. and has the true potential to improve our country’s environment and wellness,” said Mike Radenbaugh, Co-Founder and CEO of Rad Power Bikes. “We do not want to see the tariff slow down the momentum, so we’re being very transparent about how the industry is being impacted.”

Rad Power Bikes, along with the bike industry, fought to have ebikes eliminated from the proposed tariff as it will not protect, but harm U.S. businesses and U.S. consumers.

The tariff is being applied on all electric bikes that are manufactured in China and imported into the U.S. As domestic ebike manufacturing is almost nonexistent, ebike companies have no choice but to use international supply chains.

Rad Power Bikes analyzed all of their manufacturing options when they started building ebikes and continue to do so. It wasn’t and still isn’t possible for them to manufacture ebikes in the U.S. However, manufacturing in China allows them to meet a very high demand and in turn grow their U.S. based company.

Rad Power Bikes is committed to growing their large U.S. workforce. Their ebikes are designed in Seattle, and the team provides 100% localized customer service and technical support in the US, Canada, and Netherlands. The company employs nearly 75 people, 60 of which are based in Seattle, Wash.

FORCED TO RAISE A BARRIER

The biggest barrier to ebike adoption has been price, which is why Rad Power Bikes focuses on building high-performing yet affordable ebikes. Unfortunately, the tariff will now rebuild that price barrier.

Rad Power Bikes is finding ways to absorb much of the impact of the 25% tariff, but is still forced to raise prices. The cost for their U.S. ebike models will increase by $200, and it’s commercial-grade etrike model will increase by $800, as soon as the tariff goes into effect on Thursday, August 23.

“We believe ebikes have the power to change the way people and goods move, and we won’t let the tariff stop us from disrupting the world of transportation,” said Radenbaugh.

THE STORY OF RAD POWER BIKES

Rad Power Bikes is North America’s largest and most trusted electric bike company. They are  bringing practical and fun alternative transportation options to the masses. The company was born in rural California in the summer of 2007 when the founders launched their first ebike prototypes. In 2015, after noticing that it was nearly impossible to find an affordable, high-performing ebike through traditional bicycle shops, they began selling their own models directly to consumers. Since then, they have been at the forefront of sustainable electric vehicle development and accessibility, and in 2017 were named to Forbes and Inc. Magazine’s “30 Under 30” lists, and the Entrepreneur 360™ list. Based in Seattle, Vancouver, and Utrecht, Netherlands, the team of passionate ebike enthusiasts, product designers and entrepreneurs create ebikes that are built for everything and priced for everyone.