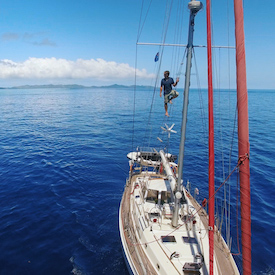 (Westport, CT.)  Outside TV is thrilled to introduce all of the fantastic adventure, travel and action sports programming Outside TV Features is adding for August 2017.

Some of the highlights for August include:

Over the Horizon (Original series EXCLUSIVE to SVOD):  Follow first time sailor and lifelong adventurer, Ellis Emmett on the trip of a lifetime; a sailboat journey from New Zealand to the South Pacific. The series begins with Emmett learning to sail in his home of New Zealand and follows his adventure throughout the South Pacific as he immerses himself in the culture of the remote islands he set out to explore.

Sight Sound (Film): Surfing is supposed to be an individual act. The surfer and the board do what they want. Let them be seen how they want to be seen. Let them be heard only through their motions. Let the camera capture what it can. Let there be Sight and Sound.

Behind the Tide (Film): Behind the Tide explores the ever changing surf culture and how individuality and creativity keeps it alive throughout generations.

For the full list of programming coming to Outside TV Features please see below.

*All Feature Films, once added will be available indefinitely via OTV Features App

Outside TV is the leading multi-platform video content provider in the adventure sports category. Outside TV’s national cable channel is the only national 24/7 network dedicated to the active adventure lifestyle. Nominated for two Sports Emmy Awards in 2016 and recipient of the 2017 Sports Emmyâ for Outstanding Camera Work, the network’s high quality HD programming features a wide variety of adventure sports and is available nationwide through major providers including Comcast XFINITY, Dish Network, Cox Communications, CenturyLink, RCN, Sling TV and Sony’s PlayStation Vue. Outside TV Features is a new subscription video service showcasing a premier collection of adventure sports films available on-demand through Amazon Channels, Amazon Fire TV, iOS, Apple TV, Android and ROKU (added). Outside TV Studios is an award-winning brand integration production house creating custom content for top marketers. Outside TV Digital is the leading aggregator and distributor of short-form adventure sports content across multiple digital and social platforms with a library of over 4,000 clips. Outside TV is part of the POWDR Adventure Lifestyle CO. portfolio.