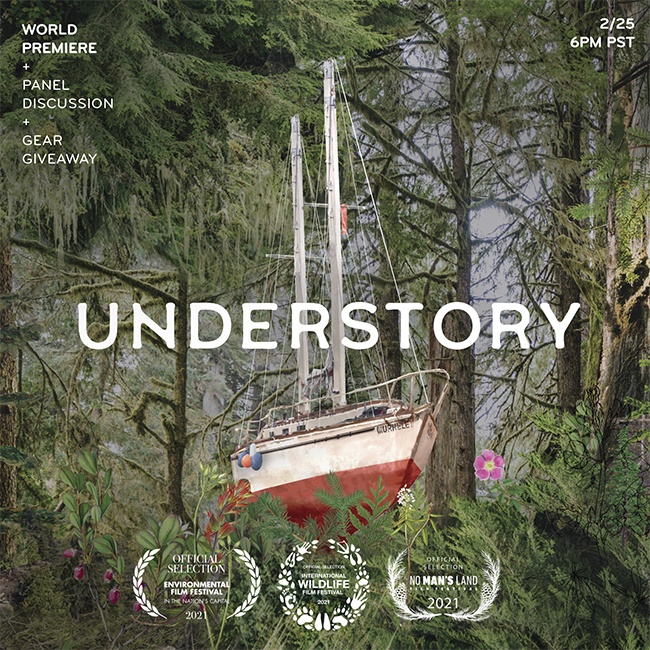 Juneau, AK (February 25, 2021) – Peak Design, in partnership with Wild Confluence Films, is proud to present the limited release of Understory: A documentary film that explores the degradation of Alaska’s Tongass National Forest. Told through the lens of three women with unique personal connections to the Tongass, Understory advances the case that saving ancient forests is critical to both the resilience of humans and the future of our planet’s climate.

At the heart of Understory is Elsa Sebastian, a young local fisherman who grew up “off-grid” in a remote Southeast Alaskan village surrounded by the vast 16.7M acre Tongass National Forest. Upon learning of plans by the U.S. federal government to strip environmental protections for nine million acres of the Tongass, Elsa recruits biologist Dr. Natalie Dawson and artist Mara Menahan to sail into remote parts of the forest and document old growth trees, the devastation of clearcutting, and to learn more about indigenous cultural connections to the Tongass.

Directed by award winning film-maker Colin Arisman of Wild Confluence Films (Rock Paper Fish, Irreparable Harm), Understory casts a light on a subject that most Americans are unfamiliar with yet are inexorably tied to; as the largest remaining temperate rainforest in the world, the Tongass is a critical resource in mitigating climate change. “In addition to being incredibly impressed by the quality of Colin’s work, Understory brings light to an important issue that too few people know about and should,” commented Peak Design Sustainability Director, Annie Nyborg. Nyborg continues, “In addition to being a film about the conservation of a place for the benefit of the region’s biodiversity and local communities, the Tongass National Forest is the largest carbon sink in the nation, the preservation of which is critical for our country’s ability to combat climate change.”

Understory will premiere on Youtube, Thursday, February 26, at 6pm PT and will be immediately followed by a prerecorded panel moderated by Annie Nyborg with the film’s lead character Elsa Sebastian, Audubon Alaska’s Executive Director Dr. Natlie Dawson and professional ski mountaineer Caroline Gleich. The film will be made publicly available for viewing on the Youtube platform until midnight Sunday, February 28, at which point the film will be screened at film festivals throughout the country.

For more information and to view a trailer of Understory, please visit: https://www.youtube.com/watch?v=l9lcYpKAwbA (this will be the same link for the premiere)

Since 2010, Peak Design has been building innovative carry solutions with a simple overarching design directive: make the best things. The idea for our first product was born on a motorcycle trip through Southeast Asia and has since expanded to include a cross-functional ecosystem of bags, pouches, slings, straps, and clips. We’ve won applause along the way, but we’re most proud of the fact that we’re 100% crowdfunded and 100% employee-owned. We’ve raised $34.4 Million through 10 Kickstarter campaigns to become the world’s most successfully crowdfunded company. This allows Peak Design to stay investor-free and focused on the things that matter most: designing great products, fostering happy employees, and taking care of our customers and the natural environment. Learn more at peakdesign.com