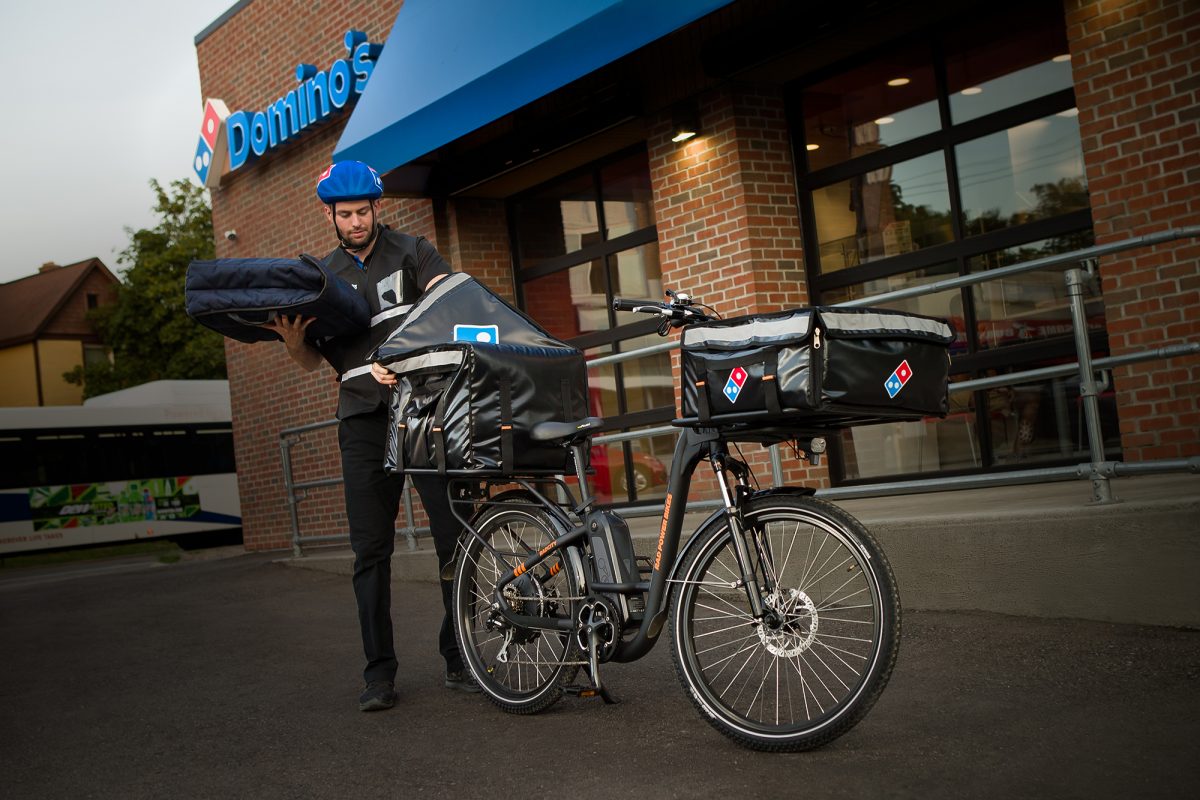 SEATTLE – August 13, 2019 – Pizza fans, rejoice! Through a national program with Rad Power® Bikes, Domino’s® pizzas will soon be delivered hot and fresh via bike lanes. Rad Power Bikes will deploy fleets of custom ebikes to Domino’s stores across the country later this year. The partnership was won by Rad Power Bikes’ Commercial Division, which brings sustainable transportation and last-mile delivery solutions to businesses around the world.

With delivery by car more challenging than ever due to congestion and parking limitations, Domino’s launched a pilot program to test the efficiency of ebike deliveries earlier this year. Locations that used ebikes from Rad Power Bikes achieved better delivery times and service scores, and those that were already using traditional bikes saw an increase in team member satisfaction after switching to ebikes. As a result of the successful pilot program, Rad Power Bikes is now Domino’s exclusive ebike provider for franchise owners and corporate stores in the United States.

“We built a tailored delivery solution for Domino’s that is setting an exciting example for how ebikes can be used to benefit business efficiency and employee satisfaction,” said Brian Rinckenberger, Commercial Sales Director for Rad Power Bikes. “We’re proud that the partnership with Domino’s, which began with one franchise owner in Seattle several years ago, is now expanding nationwide.”

The ebikes are designed based on the brand’s popular RadCity® Step-Thru electric commuter bike. Each custom ebike includes insulated soft-sided cargo areas that can hold up to 12 large pizzas in Domino’s Heatwave bags, along with drinks, sides, and dipping cups. The bikes are also equipped with popular features found across all Rad Power Bikes’ models, including puncture-resistant tires, integrated headlight, taillight, and brakelight, reflective materials for driver safety, and a top speed of 20 mph.

“Ebikes make a huge difference in my stores,” said Greg Keller, Seattle Domino’s franchisee. “While delivery on a traditional bike solved many of our traffic and parking issues, the hills in Seattle were tough on even our best cyclists. Ebikes were a game-changer for us. We have been able to save money, provide better service, increase hiring and maintain a happy workforce.”

Founded in 1960, Domino’s Pizza is the largest pizza company in the world based on retail sales, with a significant business in both delivery and carryout pizza. It ranks among the world’s top public restaurant brands with a global enterprise of more than 16,300 stores in over 85 markets. Domino’s had global retail sales of over $13.5 billion in 2018, with nearly $6.6 billion in the U.S. and more than $6.9 billion internationally. In the second quarter of 2019, Domino’s had global retail sales of over $3.2 billion, with over $1.6 billion in the U.S. and over $1.6 billion internationally. Its system is comprised of independent franchise owners who accounted for 98% of Domino’s stores as of the second quarter of 2019. Emphasis on technology innovation helped Domino’s achieve more than half of all global retail sales in 2018 from digital channels. In the U.S., Domino’s generates over 65% of sales via digital channels and has developed several innovative ordering platforms, including Google Home, Facebook Messenger, Apple Watch, Amazon Echo and Twitter – as well as Domino’s HotSpots®, an ordering platform featuring over 200,000 unique, non-traditional delivery locations. In late 2017, Domino’s began an industry-first test of self-driving vehicle delivery, and in June 2019 announced a partnership with Nuro, furthering its exploration and testing of autonomous pizza delivery.