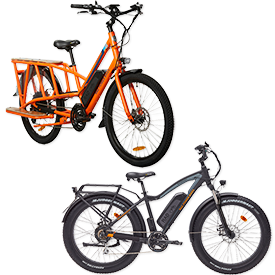 (UTRECHT, NETHERLANDS – 19 September 2018) – Rad Power Bikes, the leading direct-to-consumer electric bike company, today announces the release of their new models into the European market – the RadWagon electric longtail cargo bike and the next RadRhino electric fat tire bike. Both models are purpose-built with eye-catching frames, distinct features, and a full-speed half-twist throttle that offers unmatched power compared to traditional European ebikes. The RadWagon and RadRhino will be available for purchase online starting this fall, with free shipping to 28 European countries. Test rides are being offered now at Rad Power Bikes’ showroom in Utrecht, Netherlands.

“We are excited to bring our next round of models to the European market, especially as fall and winter approach. The ebikes can handle changing weather conditions for riders who are getting across town, safely taking the kids to school, or going on weekend adventures,” said Arno Saladin, Rad Power Bikes’ European Business Director. “Riders also have added confidence knowing that the ebikes conform to the highest European standards because they are the first to receive European type approval under the L1e-A category.”

Powering A New Class of Ebikes
Rad Power Bikes is pioneering the new L1e-A category of ebikes, which are powered cycles that can operate with or without human effort and are allowed on all biking infrastructure. The RadWagon and RadRhino feature five-levels of pedal assistance and an on-demand throttle to give riders power at their feet or fingertips. The 750W Bafang geared hub motor provides three times more power than the typical 250W ebikes that are found in Europe. Combined with the 48V 14Ah Lithium-Ion battery pack with Samsung cells, the ebikes can reach a maximum speed of 25 km/h with a range of up to 75 km per charge.

Under the L1e-A classification, the ebikes are treated like a motor vehicle in most countries, and require registration, licensing, and liability insurance, which the experts at Rad Power Bikes coordinates for all customers. This ensures that the ebike can always be traced back to the owner in the event that it is lost or stolen.

The RadWagon is the first high-powered longtail cargo ebike to be available in the European market. The rear deck combined with the throttle make it perfect for hauling kids or large loads of any dimension. With a similar width as a regular bike, the RadWagon eliminates the common challenges associated with traditional large and bulky cargo bike options. Built with a reliable battery and strong aluminum frame, the RadWagon can easily accommodate a payload of up to 158 kg. Riders can outfit the RadWagon to fit their lifestyle with a native line of racks, passenger seating accessories, baskets, and bags. Available in orange or pearl, the bright colors provide added safety and style.

The new RadRhino is the ultimate all-purpose ebike with 4” all-terrain fat tires that can conquer rides on and off the pavement. A flagship model for Rad Power Bikes, this RadRhino is the second iteration in the European market. The upgraded model features a redesigned frame, which now has a partially integrated downtube for a lower center of gravity and more streamlined fit with the battery. The new RadRhino also has a longer range with an improved battery, more comfort with high-rise handlebars and a longer stem, extra cargo capacity with front and rear rack mounts, and a fresh new color scheme.

“We are ushering in a new era of electric bikes for the European market that will help more people take advantage of the sustainable form of transportation,” said Mike Radenbaugh, Co-Founder and CEO of Rad Power Bikes. “Not only are the ebikes more powerful and versatile, but affordable too. This is part of our commitment to building industry-leading, performance ebikes without the expensive price tag.”

Learn more by visiting RadPowerBikes.eu, following Rad Power Bikes on Facebook, or taking a test ride at the Utrecht showroom.

ABOUT RAD POWER BIKES
Rad Power Bikes is North America’s largest and most trusted electric bike company. Based in Seattle, Wash. Vancouver, B.C., and Utrecht, Netherlands, the team of passionate ebike enthusiasts, product designers, and entrepreneurs create ebikes that are built for everything and priced for everyone. The company was born in rural California in the summer of 2007 when the founders launched their first ebike prototypes. In 2015, after noticing that it was nearly impossible to find an affordable, high-performing ebike through traditional bicycle shops, they began selling their own models directly to consumers. Since then, they have been at the forefront of sustainable electric vehicle development and accessibility, and in 2017 were named to Forbes and Inc. Magazine’s “30 Under 30” lists, and the Entrepreneur 360™ list.