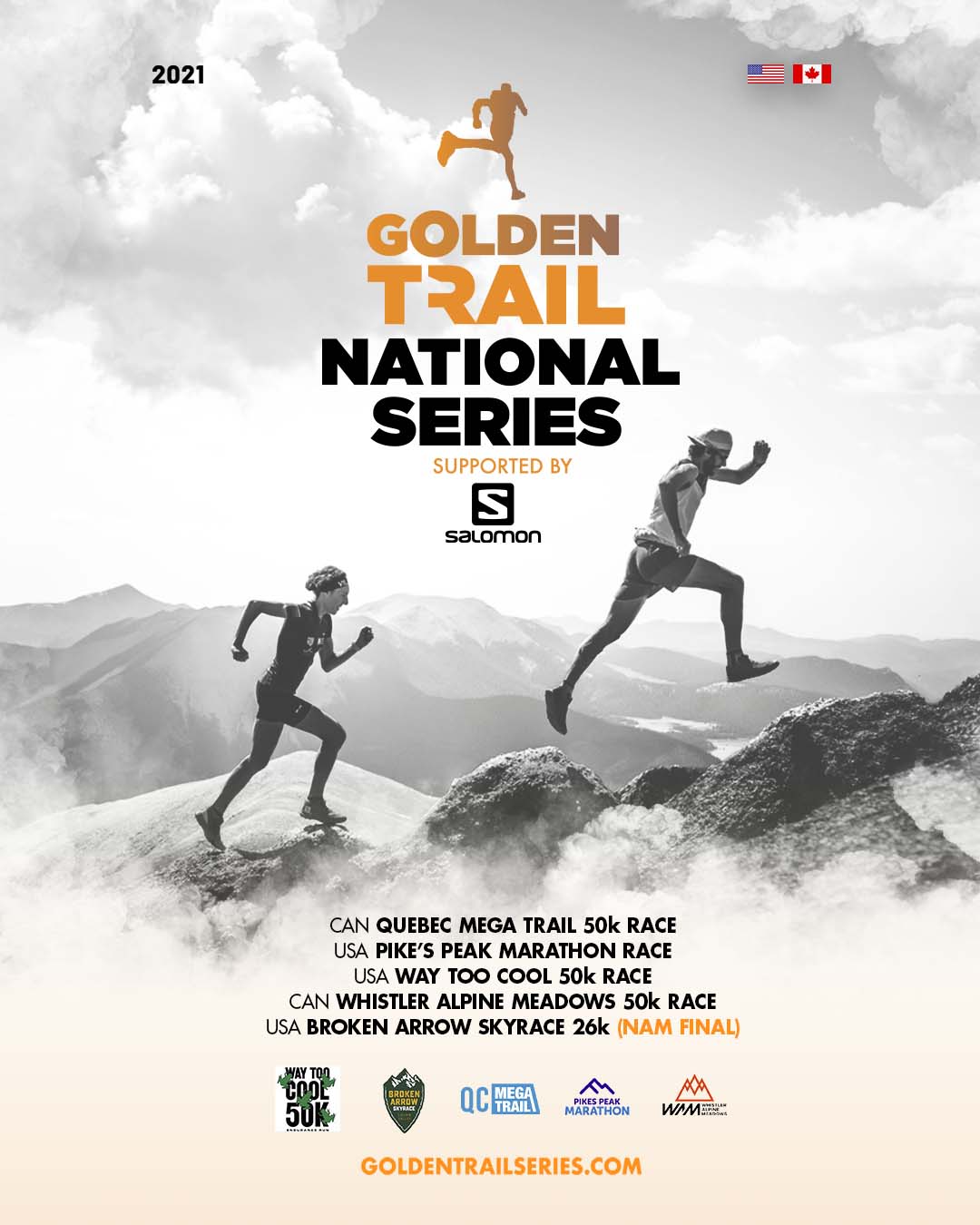 New U.S.- and Canada-based series will shine a spotlight on competitive trail running across five races in 2021

OGDEN, Utah (Feb. 16, 2021) ­– Today, Salomon announces the launch of the North American Golden Trail National Series (GTNS), inviting trail runners across North America to run the five-race series for a chance to compete in the GTNS Grand Final, a three-day stage race in the Azores Archipelago. The national series’ five races will be held across the U.S. and Canada.

“We are thrilled to further invest in trail running by bringing this popular global series to the US and Canada that will grow and evolve the sport in North America,” says Stephanie Gardner, sports marketing manager for Salomon USA. “The races we selected were designed to gather the greatest national athletes to compete on the most rugged, beautiful courses in the region and we’re really looking forward to highlighting them at the Golden Trail National Series in 2021.”

The North American series is comprised of four qualifying races and a final. To compete in the final, athletes must partake in at least three of the four races where they will earn points based on how they finish in each race. Athletes will earn double points at the final, which will be tallied with points earned from their best three out of four races. The top three men and top three women with the highest points will be invited to the GTNS Grand Final in the Azores, which will feature the top athletes from each of the seven GTNS around the world, including France/Belgium, Spain/Portugal, Italy, UK, Czech Republic/Slovakia/Poland and Germany/Austria/Switzerland. The top three men and women from the GTNS Grand Final will then go on to compete in the 2022 Golden Trail World Series Championship.

“The 2020 Golden Trail Championship in the Azores was an absolute dream come true, so I’m excited that this series is launching on the national level and will elevate North American trail running athletes,” says professional trail runner and Salomon athlete, Bailey Marie Kowalczyk. “Not only was Salomon able to hold a safe and fun trail running event last fall, but they mastered it in a way that brought so many people together and created an amazing competition. It’s exciting to hear this event will be taking place again and that more people will have the chance to compete on the world stage.”

The Quebec Mega Trail 50k is the biggest ultra-trail competition in Canada that features over 7,775 feet of vertical gain throughout the course. The race starts in the village of Saint-Tite des Caps and then climbs up the brutal Mestachibo trail. Runners will then complete two ascents and two descents of Mont-Sainte-Anne (MSA), finishing with a 21km loop in the northern trails of MSA.

The Pikes Peak Marathon is a race like no other and is known as Americas Ultimate Challenge.  With a 2,382m vertical climb, the course takes runners from Manitou Springs, Colorado to the summit of Pikes Peak at 4,302m, and back down for a total of 26.2 grueling miles. The course runs mostly on Barr Trail, which has an average grade of 11%, is often narrow, winding, or steep along with sharp turns and abrupt changes in elevation or direction. It is the oldest continually held marathon in the United States, founded in 1956. And it has the distinction of the first marathon to allow a woman to enter and finish the race in 1959.

The Whistler Alpine Meadows 55k is a full point-to-point race route that features 9,200 feet of elevation gain with a beastly climb at the start. The race starts from Whistler’s Cheakamus Canyon area and traverses over the very top of Whistler Mountain to bring runners along Singing Pass and finishing up on the challenging windy single track of the Comfortably Numb trail system.

The Broken Arrow 26k covers a world-class loop that showcases some of Squaw Valley’s most famous terrain. From the valley floor at 6,200 feet, runners will ascend nearly 5,000 feet as they circumnavigate the heralded terrain of one of North America’s most rugged and extreme ski resorts. The course is characterized by a plethora of vertical gain over a technical and physically demanding landscape that’s mostly above tree line.

Salomon is dedicated to following COVID safety protocols for the US & Canada GTNS races to ensure a safe and fun experience for all competitors and staff. Please check the GTNS website for the most up-to-date race information.