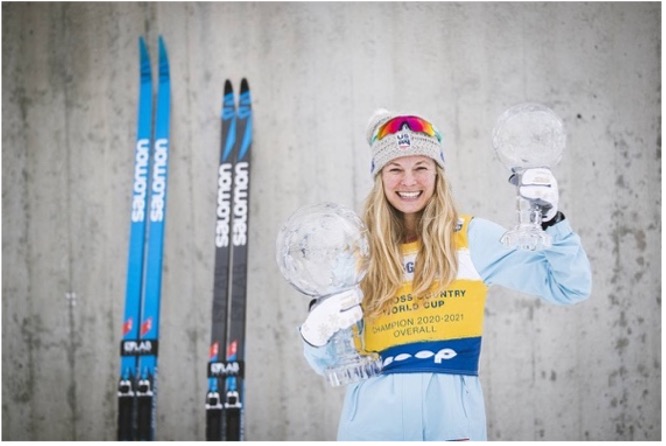 OGDEN, Utah (March, 2021) — In a historic first in the sport of Nordic skiing, American skier and Salomon athlete Jessie Diggins has won the FIS Cross Country World Cup Overall title, concluding a standout season for the 29-year-old from Minnesota. It is the first time in history that an American woman has won the biggest title in cross-country skiing. It is also the first World Cup overall title for Salomon’s Nordic ski organization.

Earlier this season, Diggins became the first American to win the Tour de ski, a stage race in the middle of the season that is made up of both skating and classic competitions, and also includes a variety of race types like sprints, mass starts, pursuits and individual starts. Diggins won six podium results in eight days during that stretch of competition, which contributed to her season-long overall title and crowned her the best skier across a wide variety of distances and the sport’s two disciplines—classic and skating. She also won the Distance World Cup overall title for the season.

“It’s crazy and exciting because this is something we have worked toward as a team and have been building momentum around for many years as a program, so I feel a lot of gratitude because this isn’t something you can achieve alone,” Diggins said. “Yes, I race super hard every time, but there are so many people behind the scenes that are providing skis, coaching us, writing training plans, helping with sports psychology and funding us through sponsorships. These people get us to the start line so it’s something we can celebrate as a team in a year that has been really challenging.”

Diggins was on the podium nine times and won four races this season. Throughout her career, she has finished on the podium in more World Cup races than any other U.S. Nordic skier in history. An outspoken ambassador for eating disorders and other causes, Diggins has been on Salomon skis for the duration of her career and her season-long title was celebrated by the entire Salomon Nordic family, including International Race Team Manager Patrice Frison-Roche.

“Not only is Jessie a fantastic skier but she’s someone who has a big heart and that’s the reason we love her so much,” said Frison-Roche. “I met her for the first time in 2011 and now, 10 years later, she’s won the overall title and that is something we are very proud of as a whole team.”

“I’m so excited to be a part of this team, and I want to thank Salomon for helping to make these globes a reality,” Diggins said in a video message to Salomon’s Nordic race support team. “It has been a long season and it’s going to take a while for it to sink in, but it’s very special and I’m excited to share it with the next generation of up-and-coming skiers from the U.S.”

Coloradan Called Out for Bolting Over Petroglyphs

Tokyo 2020 expected to use hotel as isolation facility during Olympics and Paralympics.