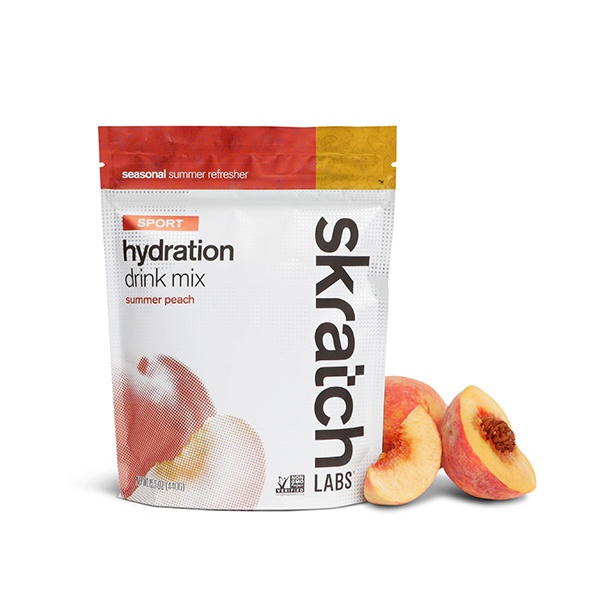 Boulder, CO (July 26, 2020)– Skratch Labs, an innovator in performance nutrition, announces the re-release of it’s seasona lsummer flavor of Sport Hydration DrinkMix, Summer Peach. With the resounding successof an initial offering in May, Skratch Labs is offering one more chance to pick up a 440g bag of Summer Peach later this summer with a second, final release in early September.

Skratch Labs’ decision to bring back Summer Peach drink mix flavor resulted from an outpouring of customer feedback after quickly selling out this spring. “Made with real peaches, Sport Hydration Summer Peach captures the taste of summer with it’s light, refreshing flavor” says Dr. Allen Lim, founder of Skratch Labs. “Like all our Sports Hydration Mixes, Summer Peachuses the same ratio of sugar and salt, specifically designed to replace what you lose when you sweat.”

Sports Hydration Mix was made to replace the water and electrolytes lost from sweat. What started off as “Secret Drink Mix” sold to pro tour riders over 8 years ago is now Skratch Labs Sport Hydration Mix in six everyday flavors. The electrolyte profile is 750-800 mg of sodium per liter, a reflection of the average athletes’ sodium sweat concentration. This formulation hydrates much faster than water alone and won’t upset your stomach like sports drinks with food coloring and preservatives can.

Based in Boulder, Colorado, Skratch Labs is a performance nutrition innovator that helps athletes and active people be better. Skratch Labs was founded by Dr. Allen Lim after he learned what nutrition was needed while coaching professional athletes for races such as the Tour de France. He was determined to create a sports drink that didn’t make his athletes sick by using less sugar, more sodium and real food ingredients. Because of his close relationship with these athletes, each product goes through extensive testing and critical feedback from some of the world’s best. Skratch Labs products are made to help “the doers” who always strive for reaching or exceeding their performance goals, no matter what stage they’re in.

Products can be purchased online at http://www.skratchlabs.comor at a variety of retailers. For more information on Skratch Labs and its products, visit www.skratchlabs.com or visit Facebook, Instagram and Twitter.

Supply Side, Shipping And SUP Sales Soar But Inventory Low

Your next North Face jacket may be made of wood pulp