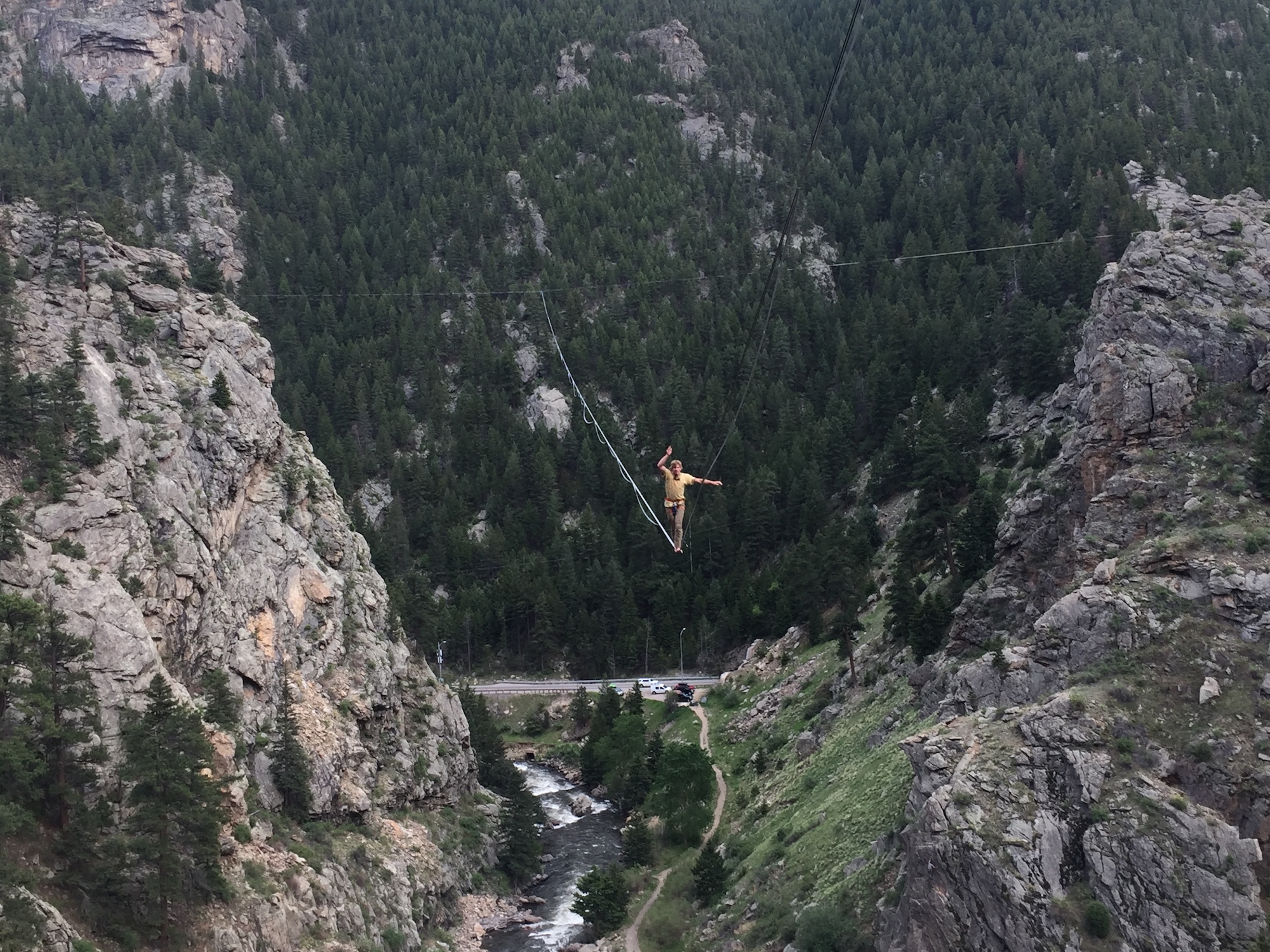 “There’s really nothing for your senses to orient to. There’s just the ground, the sky and a very thin line under you.”

BOULDER, Colorado (June 16, 2017) —To most people there would be nothing peaceful about walking across a 780 foot 1-inch thick piece of webbing toward nothing but space. For Slackline Industries pro athlete Taylor VanAllen, it’s just part of the job. On June 6, VanAllen, of Morrison, Colorado, walked himself into the record books with the first across on the longest documented “spaceline” walk in Clear Creek Canyon, Colorado.

A spaceline is a relatively new form of highlining that consists of two slacklines usually set up over wide chasm, with one slackline affixed to the middle of the other, looking similar to a peace sign.

“We are very proud of Taylor and look forward to seeing what other world records he might break,” said Ricardo Bottome, CEO and founder of Slackline Industries. “We have a lot of amazing athletes that accomplish some pretty incredible feats. This is certainly one of the more challenging I’ve heard about in a while.”

Spacelines are a relatively new form of highlining that are both more difficult to set up and to walk across. With a single highline set up across a canyon, the highliner has something solid to focus on like a tree trunk or the other side of the cliff. With a spaceline, the person is walking toward the middle of another highline – a moving target.

“Walking toward nothing but space is a unique feeling,” VanAllen said. “There’s really nothing for your senses to orient to. There’s just the ground, the sky and a very thin line under you.”

The previous spaceline record was set by Anthony Boulay, a French-Canadian highliner, with a 360-foot line.

VanAllen’s record-breaking 780-foot spaceline, named “Wide Open,” was connected to a 500-foot line, more than 400 feet above the ground.

“I never thought I’d have a world record,” said VanAllen. “Granted it’s a bit of a weird one, it still feels good.”

Slackline Industries is the premier brand in slacklining, providing a range of high-quality products to support the entire spectrum of slackline styles and users. SI is dedicated to leading the industry through event promotion, setting international competition standards and pursuing product innovations that focus on performance, safety, education and environmentally responsible etiquette. Visit their website at www.slacklineindustries.com.