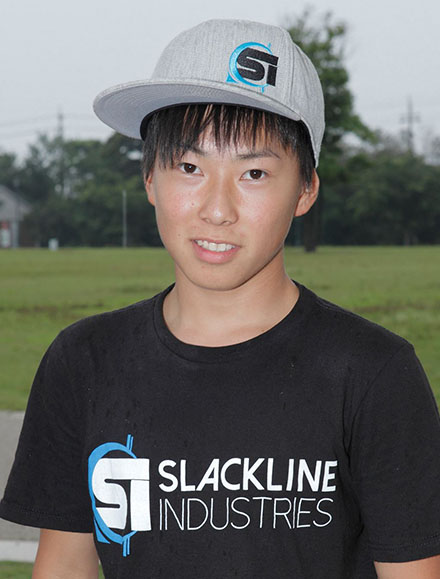 Hosoe, a member of the Slackline Industries Pro Team, also took first place at the recent Vigo Street Stunts slackline competition in Spain and the Ocean Competition in Portugal.

“It’s been great to represent my country at these international competitions,” said Hosoe. “I love to watch the enthusiasm around the sport grow.”

The 2017 Slackline World Cup, hosted for the first time in Asia, had a top prize of one million Yen ($9,000 USD). Adding cache to Hosoe’s prize money will be a jump to the enviable position of “World No. 1” according to the widely accepted ISI Slackline Judging ranking. Slackline Industries developed and launched the ISI system in 2015 and it has since been adopted as the gold standard for international slackline competitions.

Hosoe’s final score was 670.132, trailed closely by two Brazilians, Randy Freitas and Darllyon Araujo. Two US athletes, Dylon Lousberg of Colorado and Alex Mason of California, qualified for the competition but failed to reach the final rounds.

“We love seeing our team at the top, and Hosoe definitely earned it,” said Frankie Najera, marketing director at Slackline Industries. “But even more we love seeing the talent, style and athleticism coming out of everyone at these competitions. It’s downright Olympic.”

Representing nine countries – USA, Japan, Chile, Russia, Peru, Brazil, Estonia, Spain and Portugal – participants in the Slackline World Cup qualified for the competition based on their performance in three official competitions or their score in an ISI ranked competition.

The annual Online Trickline Championship, a chance to submit a 90-second video to be assessed by ISI judges, is the most accessible competition for budding trickliners around the world looking to show their mettle. The top four trickliners in this year’s competition won cash prizes and a trip to the Slackline World Cup in Japan.

Slackline Industries is the premier brand in slacklining, providing a range of high-quality products to support the entire spectrum of slackline styles and users. SI is dedicated to leading the industry through event promotion, setting international competition standards and pursuing product innovations that focus on performance, safety, education and environmentally responsible etiquette. Visit their website at www.slacklineindustries.com.