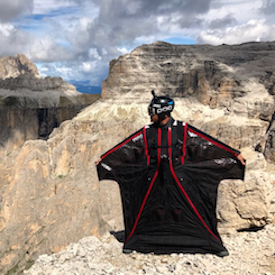 WESTPORT, CT (Aug 16, 2017) — Outside TV, the leader in adventure- and action-sports content, is proud to announce a record-breaking attempt at the first-ever wingsuit flight stunt performed against the upcoming total solar eclipse.

On Monday, Aug. 21, 2017, at 10:20 a.m. PST, the full solar eclipse will be visible for approximately two minutes in Madras, Oregon, one of the first U.S. locations to experience the spectacular event. During this two-minute period, professional wingsuit pilot Marshall Miller, along with nine other professional BASE jumping pilots, will perform the first-ever coordinated wingsuit formation to chase a full solar eclipse.

“The idea of flying 10 wingsuits into a solar eclipse is a once-in-a-lifetime event, one I’m glad to be doing with this incredibly talented group of individuals,” says Miller. “I try to make the most of these special occasions. I want to do something on these days to actually remember them specifically for something we did on that day more so than something we saw.”

The crew of 10 jumpers will converge on the Cascade Range on Sunday, Aug. 20, to rehearse for their jump. During that time, Outside TV will be hosting a Facebook Live stream of the pilots practicing for their jump the following day; it is critical that the pilots execute the “solar formation” flawlessly so as not to miss this chance of a lifetime. Footage of the historic jump will be captured via GoPros on each of the pilots’ helmets and Outside TV will be on site to document this incredible event from the ground.

“Here at Outside TV, we love to push the boundaries. It wouldn’t be considered adventure television without some sort of risk. Marshall Miller is an experienced wingsuit pilot who has flown all over the world and back. We are excited at the opportunity of working with Marshall on this solar-eclipse event,” states Chris Crowley, Outside TV executive producer.

A 60-second event clip will be available shortly after the jump is successfully executed, while a deeper, behind-the-scenes feature, “Solar Formation,” will air at a later date exclusively via Outside TV Network.

For more information on all Outside TV original programming, please visit OutsideTV.com. Additional curated content, including thousands of free short-form adventure-sports videos and full-length feature films, can be accessed via the FREE app, Outside TV Features.

Outside TV is the leading multi-platform video content provider in the adventure-sports category. Outside TV’s national cable channel is the only national 24/7 network dedicated to the active adventure lifestyle. Nominated for two Sports Emmy Awards in 2016 and the recipient of the 2017 Sports Emmyâ for Outstanding Camera Work, the network’s high-quality HD programming features a wide variety of adventure sports and is available nationwide through major providers including Comcast XFINITY, Dish Network, Cox Communications, CenturyLink, RCN, Sling TV and Sony’s PlayStation Vue. Outside TV Features is a new subscription video service showcasing a premier collection of adventure-sports films available on demand through Amazon Channels, Amazon Fire TV, iOS, Apple TV, Android and ROKU. Outside TV Studios is an award-winning brand-integration production house creating custom content for top marketers. Outside TV Digital is the leading aggregator and distributor of short-form adventure-sports content across multiple digital and social platforms, with a library of over 4,000 clips.