Stake in the Ground: Outdoor Industry Leads Paradigm Shift for Women in the Workplace 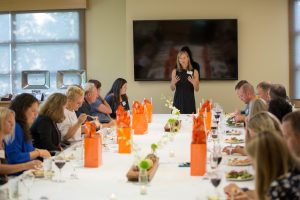 BOULDER, Colo. (January 22, 2018) – As #TimesUp for Hollywood and weekly headlines implicate one tech company after another, the $800 billion outdoor industry has been, for the past three years, investing in a cultural evolution where women leaders thrive. Camber Outdoors, an organization dedicated to achieving women’s equality in the active-outdoor industry, has been the driver behind this critical change. It starts and stops with the CEO – over 70 of them.

Camber Outdoors launched the Camber CEO Pledge, a first-of-its-kind initiative-committing signatories to attract, retain, and advance women in their workplaces by elevating women’s leadership into a strategic business imperative. While other CEO Pledges, Paradigm for Parity, Catalyst CEO Champion for Change, CEO Pledge for Diversity and Inclusion, have emerged in the past year, none focus on leveraging what makes a particular industry unique.

“By committing to women’s leadership as a strategic priority for their business, active-outdoor industry companies are setting an example for the rest of the country,” said Deanne Buck, executive director of Camber Outdoors. “A workplace culture that fosters women in executive roles is necessary to attract and retain the best talent and move the business forward.”

Active-outdoor industry executives agree they still have a long way to go to reach gender equality, but since signing the CEO Pledge and working with Camber Outdoors, they have seen positive changes within their companies as dialogue around gender equality opened up and steps were taken to provide more mentoring, sponsorship, and leadership opportunities for women.

Above all, there is certainly increased awareness of a need for change, and advancing more women in leadership roles is not just the right thing to do, but the smart thing to do for business.

“If you’re really going to go after the women’s market, you’ve got to have women in leadership positions,” said Donna Carpenter, CEO and co-founder of Burton Snowboards. “It can’t be a token woman; it can’t be 10 percent of the leadership. I’ve heard the tipping point is a third—once one-third of leadership roles are held by women, the dynamic changes.”

For more information on Camber Outdoors, the CEO Pledge, and the work the organization is doing to accelerate equitable and inclusive workplaces for all women, please visit: camberoutdoors.org.

View all Releases by
Camber Outdoors