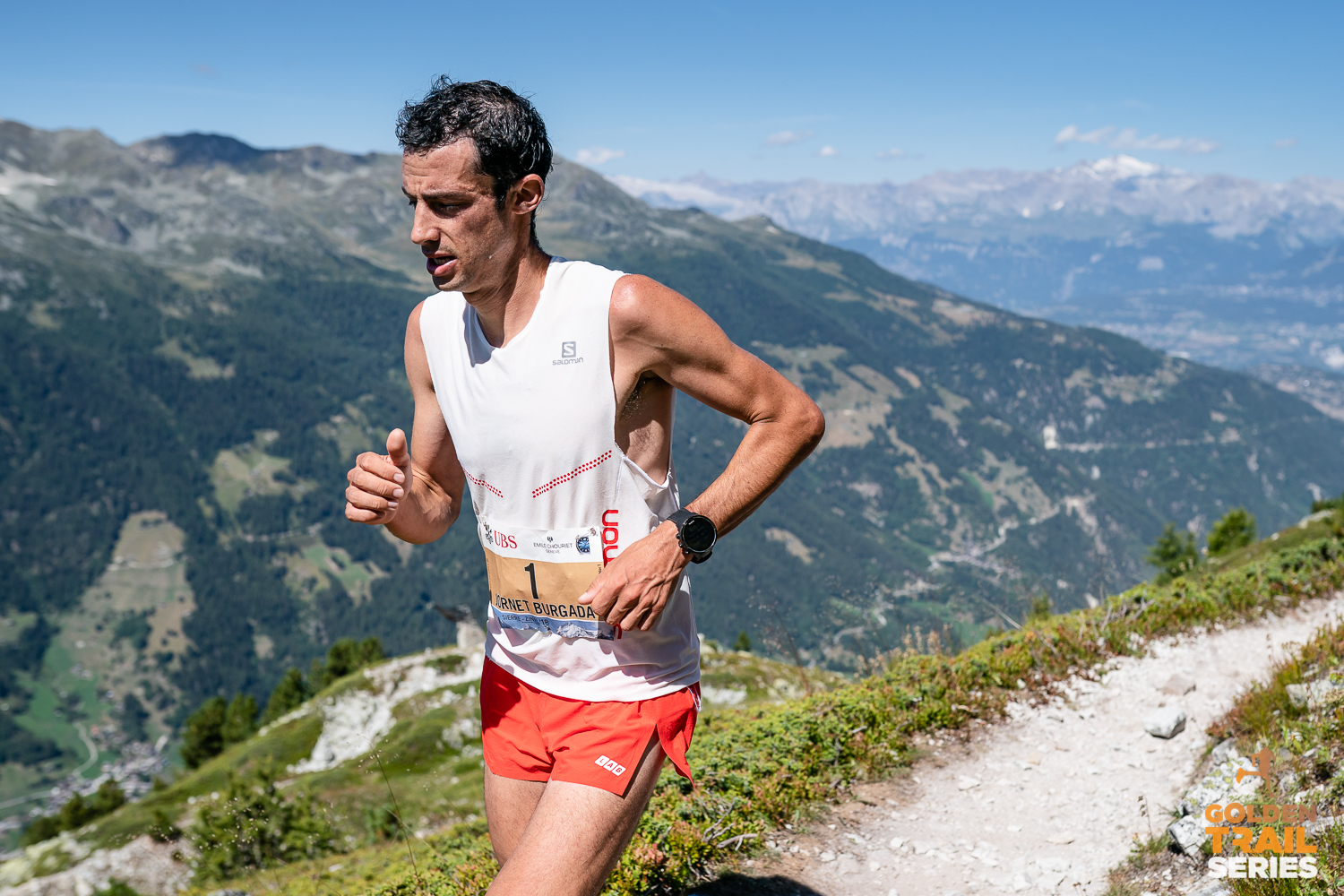 ZINAL, SWITZERLAND – This Sunday’s fourth Golden Trail World Series race of 2019, the famed Sierre-Zinal race in the Swiss Alps, is loaded with top runners. Traditionally a race that attracts runners from a variety of disciplines due to its “short” and “flat” 31km route (despite gaining 2,200 meters from the start in Sierre to the finish in Zinal), this year’s edition may go above and beyond in the talent category. Depending on the conditions, it would seem that one of the most respected course record’s in the sport, held since 2003 by Jonathan Wyatt, could be in jeopardy. The course brings four 4,000-meter peaks into view along the way making it one of the most scenic races in the world, but the guys at the top might spend the morning looking over their shoulders and at the competition around them rather than the views.

The most popular and consensus top trail runner on the planet, Kilian Jornet, will return to action in search of his seventh win at Sierre-Zinal after he won his record sixth title last year by running away from the field in the second half of the race. The Team Salomon athlete from Spain has laced up his shoes just once this season on the Golden Trail World Series, winning the series-opener at Zegama in convincing fashion. He will go from Sierre-Zinal to Pikes Peak in Colorado two weeks later.

Before that, Jornet will have his hands full on Sunday with rivals from across the world of running. American Jim Walmsley (Team Hoka), coming off his course-record smashing win at the Western States 100 in July, has never competed at Sierre-Zinal and tends to favor ultras. Still, the screaming uphill start and rolling course profile to the downhill finish could suit him well and he has stated his eagerness to compete here.

The man to beat of late has been Italian Davide Magnini, who has wins at the Marathon du Mont Blanc then the Dolomyths Run in his homeland in July. The 21-year-old Team Salomon athlete has been hailed as a future star, and it appears the future is now. He has beaten some class fields in both those races, and finished 7th at Sierre-Zinal last year, 5 minutes behind Jornet.

“Sierre Zinal is always a race with a huge field, where strong mountain runners meet skyrunners, road racers and orienteers,” Jornet said this week. “And this edition will be epic. I think there are at least 15 runners who will be fighting for the victory.”

Italy’s Nadir Maguet (Team La Sportiva) was 2nd to Magnini in both the Marathon du Mont Blanc and the Dolomyths Run, and is a strong candidate to crack the podium again. Two Team Salomon athletes figure to be fighting for podium places as well—Poland’s Bart Przedwojewski, the current season-long leader of the Golden Trail World Series, and Norway’s Stian Angermund-Vik, 3rd in the overall standings.

This week, they will be joined by a list of veterans with serious résumés. Add to the mix Great Britain’s Robbie Simpson (Team Adidas Terrex), a road running star who finished 2nd to Jornet here last year (and 2nd in 2017 and 2016), as well as Kenya’s Robert Surum (Team Run2gether), who was 3rd last year, Italy’s Francesco Puppi (Team Hoka), 4th in 2018, and 2016 winner Petro Mamu from Eritrea.

“Davide Magnini has done a super start of the season. He is very talented, hungry and is one of the strongest climbers ever,” Jornet said. “Runners like Robbie Simpson or Petro Mamu and Andrew Douglas have already been super competitive here. Geoffrey Ndungu, Robert Surum are the fastest in flat and also good climbers. Same for Andy Wacker or Jim Walmsley. Young talents like Jacob Adkin and Rémi Bonnet will push hard for sure, too. And there are plenty more, so for sure it will be a great show!”

In addition to those guys, Swiss athlete Marc Lauenstein makes his return from a foot injury that cost him several months of his season following a win in early spring in France that appeared to get his 2019 off on the right foot. Lauenstein, who won Sierre-Zinal in 2013, is a savvy, talented racer who knows the course, and the home crowd will be on his side. American trail veteran Max King (Team Salomon) also makes his first start on the GTWS of 2019. Like Lauenstein, King has been recovering from injury but always get himself into the mix near the front of the pack.

In the women’s race, Kenya’s Lucy Murigi isn’t a competitor in the Golden Trail World Series, but she has won the last two editions of this race and returns again to try to make it three consecutive. A talented crop will be looking to spoil her three-peat party plans.

New Zealand’s Ruth Croft (Team Scott) leads the Golden Trail World Series after a win at Chamonix and a 2nd place effort at the Dolomyths Run. The defending Series champion, she finished 4th in Sierre-Zinal in 2018. Switzerland’s Judith Wyder (Team Salomon) has to be one to watch as well. She joined the Golden Trail World Series at the Dolomyths Run and won, breaking the former course record there by seven minutes. Now she returns to her home turf looking to back up that impressive victory. Another Swiss, Maude Mathys (Team Salomon), was 3rd in Canazei behind Wyder and Croft. Will the home crowd carry her to victory at Sierre-Zinal?

Norway’s Eli Anne Dvergsdal (Team Salomon) had a tough day at Canazei, where she was feeling ill going into the race, but is back this week. She won at Zegama to start the season and is 2nd overall behind Croft in the season-long GTWS points standings. France’s Amandine Ferrato (Team Hoka) is currently 3rd overall in the series. After a challenging day in Canazei that came with a twisted ankle, she will give it her best in the Swiss Alps. Italian Silvia Rampazzo (Team Tornado) is always in contention. She is 5th in the GTWS after a great 2nd place run at Chamonix and a 7th place finish at the Dolomyths Run in her home county.

Keep an eye also on Spain’s Gisela Carrion (Inverse Team Trail), who was 4th at Zegama and will run her second race of the GTWS. Finally, Switzerland’s Simone Troxler (Team Running Conseil) ran to a 3rd place finish at Sierre-Zinal last year and should be in the hunt again.

ABOUT THE GOLDEN TRAIL SERIES:

The elite runners of the Golden Trail World Series are trying to earn points in the season-long chase for a spot in the Grand Final, which will take place in Nepal in October. The athletes must participate in three of the six races during the series in order to be eligible for the final. The top-10 men and women with the most points in their three best races will earn a trip for themselves and a person of their choice to the Grand Final. The overall final standings (and the men’s and women’s champions) of the Golden Trail World Series will be determined again by the runners’ three best finishes during the season, plus their result at the Grand Final.